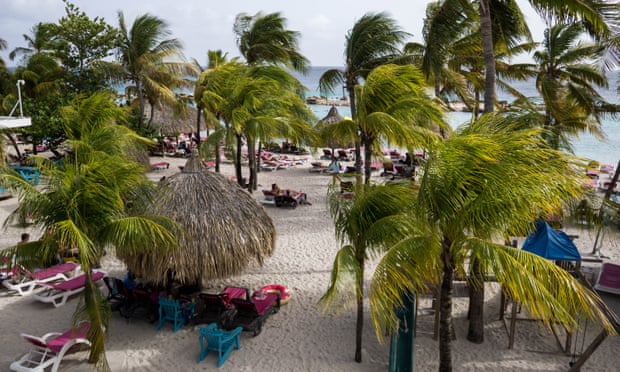 Curaçao hosts 16,000 undocumented Venezuelans who live under threat of summary deportation and many more have fled crisis at home to Trinidad and Tobago

Sunburned European holidaymakers amble around the island’s colonial capital or lie sprawled on lounge chairs. From Curaçao’s postcard-perfect beaches you can sometimes see the coast of Venezuela, but tourists enjoying the sun are unlikely to see many of the thousands of Venezuelans who live here.

Angélica Morales, 37, barely leaves her cramped apartment in the capital, Willemstad: like thousands of undocumented migrants, she lives in constant fear of the police.

“We have to be hidden. This is the life of the illegals here in Curaçao,” said Angélica, who – like other migrants on the island interviewed for this story – asked to be identified by a pseudonym.

Political repression, violent crime and economic collapse have caused at least 3 million Venezuelans – more than 9% of the country’s population – to flee their home since 2015, in an exodus without precedent in Latin America.

The crisis has created challenges for countries across South America, where opportunities for migrants are scarce, even when they are granted political asylum.

And due to their geographical proximity, the Caribbean islands have found themselves of the frontline of the emergency: Curaçao lies 40 miles off the Venezuelan coast while Trinidad is just seven miles from the mainland.

Accurate statistics are hard to come by, but more than 100,000 Venezuelans have fled to the Caribbean islands. At least 40,000 have gone to Trinidad and Tobago, some 28,500 are in the Dominican Republic and 16,000 have gone to Aruba.

The numbers are a fraction of those seen in mainland South America – Colombia has received more than a million migrants – but few of the territories in the region have the infrastructure to cope with such an influx and most have responded to the crisis by simply deporting any Venezuelans they can. 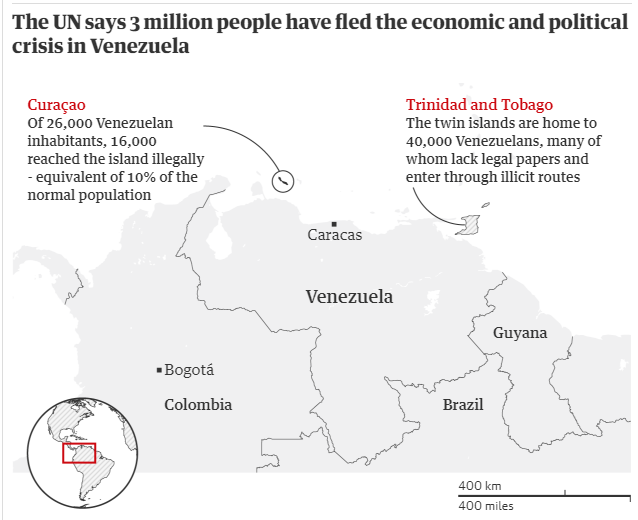 As the number of refugees increases, so does xenophobia and exploitation. In August, an angry mob destroyed a migrant camp in Brazil, and while such attacks have not been reported in the Caribbean, migrants have described a climate of hostility and official harassment. Unable to find legal employment, they are forced to work in the black economy; female migrants have been forced into sex work across the region.

Some 16,000 Venezuelans are living illegally in Curaçao – equivalent to 10% of the island’s population.

“No matter how small the flow is, we’re still talking about a significant percentage of the local population,” said Geoff Ramsey, a Venezuela expert from the Washington Office on Latin America, a DC-based thinktank.

A Venezuelan man sitting near a tourist beach on Curaçao put it another way: “The problem is not that people are eating from the trash in Venezuela, but that there’s not even enough trash for everyone.”

Venezuelans either enter as tourists and overstay their visa, or risk the dangerous sea journey in small boats; most consider themselves refugees, but Curaçao treats them as economic migrants.

“Unfortunately, in many countries [in the region] even refugees in need of protection are received as economic migrants. But the truth is that many of these people have humanitarian needs that go beyond those of more traditional economic migrants,” said Ramsey.

And according to Amnesty International, even people who would qualify for refugee status are unable to claim asylum in Curaçao: under the island’s “active removal strategy” Venezuelans with irregular migration status are deported – in breach of international law.

In 2017, 1,203 Venezuelans were thrown out, often after being forced to pay for their own flights.

Curaçao, a former Dutch colony, is one of four territories which constitute the Kingdom of the Netherlands, and although it is not part of the European Union it is bound by the European Convention on Human Rights, which forbids deportations to countries where individuals face a serious risk of torture and abuse.

This week, the Dutch state secretary of kingdom affairs, Raymond Knops, said the government would not investigate Curaçao’s treatment of Venezuelan migrants.

Fear of deportation prevents people with an apparently clearcut case from even attempting to claim asylum.

Hernán Murillo, a former member of the internal affairs department of Venezuela’s military counterintelligence agency, fled home two years ago after he witnessed colleagues commit three killings and uncovered evidence implicating army officers in fraud schemes. “They threatened to kill me,” Murillo exclaims. “Instead of taking action against [the corrupt officers], they took action against me.”

After two years in Curaçao, he has still not dared apply for political asylum, because he assumes he will be arrested and deported. Instead, he finds odd jobs on building sites and in bakeries, sending a few dollars back to his family each month.

He has good reason to be fearful: migrants who are caught by the police are held in police cells or detention centres until they are deported – often in “inhumane” conditions, said Mary Anne Goiri who represents Venex, an association of Venezuelans on Curaçao.

“They are treated as criminals while not having committed a crime,” said Goiri.

By far the most popular Caribbean island destination is the twin island nation of Trinidad and Tobago, which lies almost within swimming distance of Venezuela’s west coast.

Carlos González was an investigative journalist in Monagas, Venezuela, until he was blacklisted and threatened after reporting on the black market in subsidized food products.

Now he works in a supermarket where he gave an interview while stocking the shelves with breakfast cereal. If detained by Trinidadian authorities, he risks being jailed, fined or sent back to Venezuela.

In April, Trinidad and Tobago deported 82 Venezuelan asylum applicants, in violation of international refugee law. “This country will not allow the United Nations or any other international body to convert it into a refugee camp,” said the prime minister, Keith Rowley. Since then the government has promised new legislation on asylum seekers, but it has yet to emerge.

“We live in a judicial limbo: we have no way to legally support ourselves here,” said González. “I feel that I came from a country where I do not have rights, but here I’m also without rights.”

Cultural differences in the former British colony can be jarring for migrants, who struggle with English, right-hand drive cars and cricket. Security is also an issue: Venezuelans leave behind a country judged to be the second most dangerous in the world, but Trinidad and Tobago is only 10 places below that, and undocumented refugees are both targets and recruits for the islands’ gangs.

“As long as the borders remain porous, more Venezuelans are going to come,” said the Roman Catholic archbishop of Port of Spain, Jason Gordon, who argues that instead of shunning migrants, Trinidad and Tobago should help them use their skills to build the economy. “This is an issue that affects every citizen of the island.”

Why it’s worth hedging overseas bonds but not equities