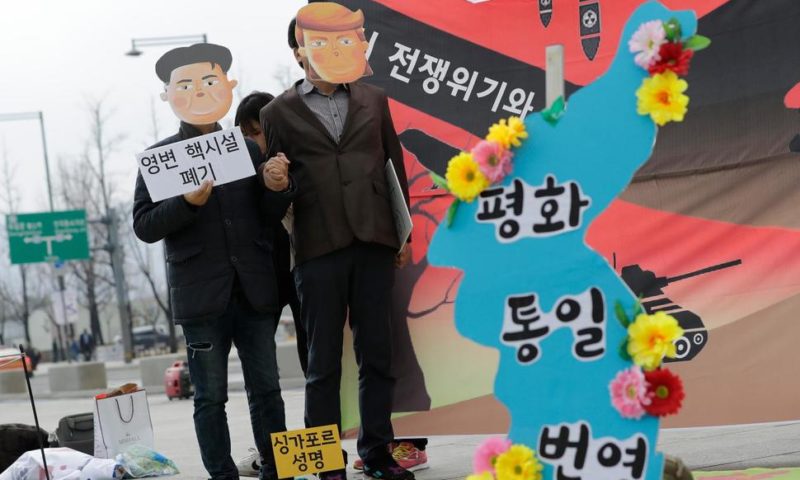 “The maritime industry must do more to stop North Korea’s illicit shipping practices,” Trump’s national security adviser John Bolton tweeted. “Everyone should take notice and review their own activities to ensure they are not involved in North Korea’s sanctions evasion.”

The White House says the sanctions are evidence that the U.S. is maintaining pressure on North Korea in an effort to coax its leader, Kim Jong Un, to give up his nuclear weapons program.

Treasury, in coordination with the State Department and the U.S. Coast Guard, also updated a North Korea shipping advisory, adding dozens of vessels thought to be doing ship-to-ship transfers with North Korean tankers or exported North Korean coal in violation of sanctions.

Two senior administration officials, who briefed reporters only on condition of anonymity to discuss U.S. policy on North Korea, said illegal ship-to-ship transfers that violate U.S. and international sanctions have increased and not all countries, including China, are implementing the restrictions. They said the deceptive practices include disabling or manipulating ship identification systems, repainting the names on vessels and falsifying cargo documents.

Treasury Secretary Steven Mnuchin said in a statement that fully implementing the U.N. resolutions is key to getting Kim to give up his nuclear weapons program. “Treasury will continue to enforce our sanctions, and we are making it explicitly clear that shipping companies employing deceptive tactics to mask illicit trade with North Korea expose themselves to great risk,” Mnuchin said.

Consumers Should Soon See Benefit of Fed’s Patience on Rates