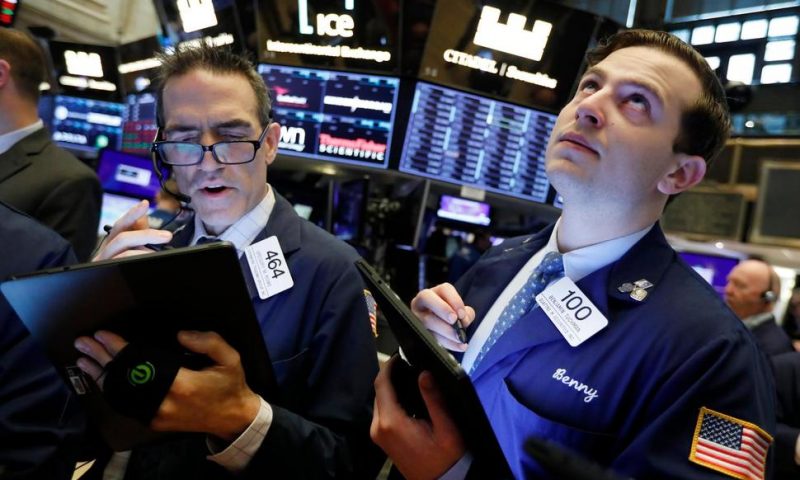 Stocks on Wall Street notched modest gains Friday, erasing some of the market’s steep losses from a day earlier.

Stocks on Wall Street notched modest gains Friday, erasing some of the market’s steep losses from a day earlier.

The upbeat finish to a turbulent week still left the market with its third straight weekly loss.

Stocks swung between gains and losses all week as investors weighed the prospect of a prolonged trade war between the U.S. and China. Trading has been volatile since the dispute escalated earlier this month, with both sides raising tariffs on each other’s goods.

The modest gains snapped a two-day losing streak for the S&P 500 as investors saw opportunity after the previous days’ wave of selling.

“Today you’re just seeing a rebound, really almost across the board, so that tells you yesterday everything was just being sold with no rhyme or reason,” said Ben Phillips, chief investment officer at EventShares.

The market’s modest rebound came ahead of a three-day holiday weekend. U.S. stock markets will be closed Monday in observance of Memorial Day.

The resumption of trade hostilities this month has interrupted a market rally that saw the S&P 500 recoup the fourth quarter’s sharp loss and hit a new high. The index is down 4.1% so far in May, though it’s still sporting a gain of 12.7% for the year.

The U.S. and China concluded their 11th round of trade talks earlier this month with no agreement. Instead, the U.S. moved to increase tariffs on Chinese goods, prompting China to reciprocate. The trade dispute escalated further after the U.S. proposed restrictions on technology sales to China, though it has temporarily backed off.

President Donald Trump said Thursday that he expects to meet with his Chinese counterpart Xi Jinping at a summit next month in Japan. Both sides have expressed a willingness to resume negotiations, while at the same time ratcheting up antagonistic rhetoric, leaving investors confused about what happens next.

Investors will likely be stuck dealing with a volatile market until the outcome in the trade dispute becomes clear. As such, investors are starting to realize that the conflict could drag on much longer than initially anticipated, said Craig Birk, chief investment officer at Personal Capital.

“The lesson learned lately is that nobody knows,” Birk added.

Technology companies have borne the brunt of the market’s monthlong downturn as they face the possibility of restricted sales to Chinese companies. The sector eked out a tiny gain Friday. HP rose 4.4% and Intuit climbed 6.7% after reporting solid profits and issuing a surprisingly good forecast.

Consumer staples, which include beverage and packaged food makers, declined the most. Constellation Brands slid 3.7%.

Utilities also fell as traders shifted their money into riskier holdings. That marked a reversal from a day earlier, when investors bought up utilities, bonds and other safe-play holdings. The yield on the 10 year Treasury rose to 2.32% after slipping to 2.29% late Thursday, its lowest level in more than a year.

Shares in Tesla slumped 2.5%. A series of analyst notes have questioned demand for the troubled electric automaker’s cars. Tesla stock has lost ground for seven of the last eight trading days and has surrendered almost 43 percent of its value since the start of the year.

A couple of retail stocks had big moves in opposite directions Friday.

Hibbett Sports surged 20.9% after the sporting goods retailer blew past Wall Street’s profit expectations and raised its forecast for the year.

Energy futures ended broadly higher, recovering some of their steep losses from a day earlier.