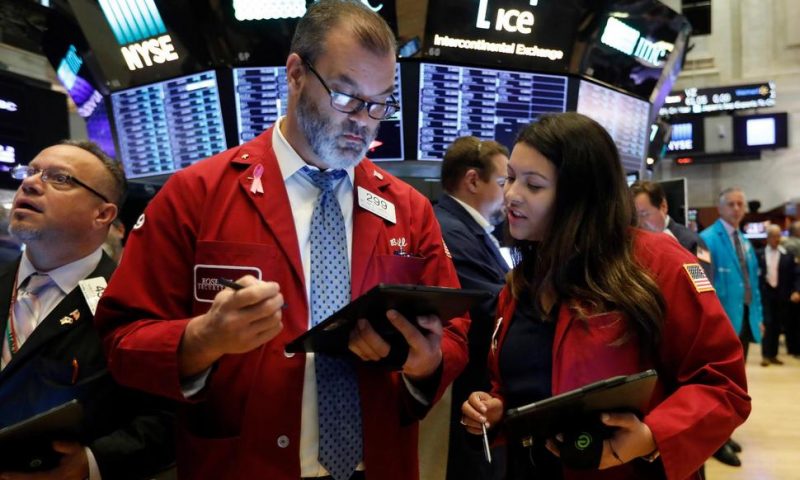 The rally came as investors found fresh reason for optimism as the U.S. and China continue negotiations aimed at resolving their costly trade war. China’s top negotiator said over the weekend that “substantial progress” was being made in its talks with the U.S. Tensions over trade between Washington and Beijing have cooled recently.

The latest gains nudged the S&P 500 above 3,000 points for the first time in a month. The benchmark index is now within 0.7% of its all-time high set on July 26 but could need a catalyst to set a record.

“This would be about the fourth time since July that we’re coming up against that all-time high again,” said Randy Frederick, vice president of trading & derivatives at Charles Schwab. “I have a hard time seeing us break through that if we don’t get some kind of a trade deal.”

As they wait for trade talk developments, investors have been shifting their focus to corporate earnings reports. Monday was a relatively quiet start to a week full of results from major companies.

Analysts came into this latest earnings season expecting profits to decline overall for companies in the S&P 500. But with about 15% of companies in the index reporting so far, results have been surprisingly positive.

“We remain cautious for the quarter but believe that companies will continue to chin the low bar they have set and ultimately, we will end the quarter flat or up low single digits,” said Katie Nixon, chief investment officer for Northern Trust Wealth Management, in a note to investors.

Earnings growth fell slightly in the first and second quarters, according to data from FactSet, which was better than Wall Street’s expectation at the start of those reporting seasons.

Chipmakers, many of which are highly reliant on China for business, made some of the strongest gains Monday. Nvidia rose 2.9% and Micron Technology added 4%. Apple rose 1.7%

The yield on the 10-year Treasury rose to 1.80% from 1.75% late Friday. Higher yields allow banks to charge more lucrative interest on mortgages and other loans. Higher yields are also a sign that investors are more confident.

The materials and health care sectors were the only laggards.

Traders continued to hammer Boeing shares. The stock fell 3.8% on top of a 6.8% slide on Friday. Congress is ramping up its scrutiny of Boeing as its CEO, Dennis Muilenburg, is scheduled to testify to the House’s transportation committee on Oct. 30.

Investors are concerned about the latest revelations surrounding its 737 Max airplanes.

In messages released last week, former senior Boeing test pilot Mark Forkner told a co-worker in 2016 he unknowingly misled safety regulators about problems with a flight-control system that would later be implicated in two deadly crashes. On Sunday, the company said that it’s unfortunate that messages between co-workers weren’t released in a manner allowing for “meaningful explanation.”

Halliburton jumped 6.4% after the oilfield services company said it will cut costs in its North American operations amid a decline in customer spending.

Meanwhile, the nation’s three largest drug distributors and a drugmaker reached a $260 million deal early Monday to settle a lawsuit related to the U.S. opioid crisis. The agreement averts what would have been the first federal trial over the crisis, though it does not resolve more than 2,600 other lawsuits seeking to hold the drug industry accountable for the deadly toll taken by opioids.