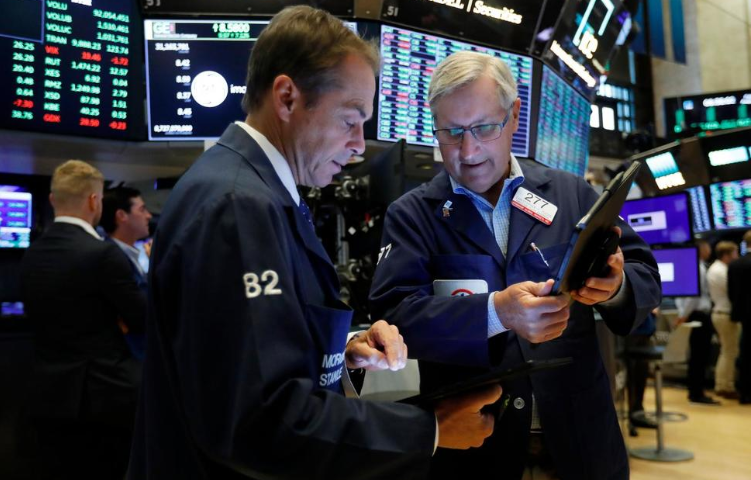 Stocks gave up an early gain and then wavered through much of the day after a mixed batch of economic data coupled with remarks from two Federal Reserve bank presidents left investors less certain about the likelihood that the central bank will lower interest rates again next month.

Traders hope for a better read on Fed policy Friday, when Chairman Jerome Powell is scheduled to speak at the central bank’s annual conference in Jackson Hole, Wyoming.

“The market is expecting a rate cut in September, and if Powell doesn’t think that consensus is going to be to cut rates, he needs to start preparing the market for that,” said Willie Delwiche, investment strategist at Baird.

The Fed cut its key policy rate July 31 for the first time in more than a decade, citing a number of “uncertainties” that were threatening the country’s decade-long expansion, from Trump’s trade battles to slowing global growth.

Investors have been convinced that the central bank will follow up the July rate cut with further cuts at coming meetings, beginning with one next month.

But remarks from Esther George, president of the Fed’s Kansas City regional bank, and Philadelphia Fed President Patrick Harker, have injected some doubt about what the Fed will do next.

In televised interviews, both said they don’t see a need for another rate cut.

George and Eric Rosengren, president of the Boston Fed, dissented from the 8-2 rate cut vote, arguing that they favored no rate cut at all.

Minutes from the Fed’s July meeting released Wednesday provided little clarity on what the future course for rates will be.

Investors now predict a 91.2% likelihood that the Fed will cut its benchmark rate by a quarter-point next month, according to the CME Group, which tracks investor bets on central bank policy. That’s down from 98.5% the day before.

New economic data also has done little to make clear the Fed’s next move. Positive consumer-related data on home sales, retail spending and jobless claims could argue against the need for lower rates. But a closely watched index that showed manufacturing contracted this month for the first time in a decade could help make the case for another cut.

“The market is trying to figure out what Powell is going to say tomorrow,” said Delwiche. “Any news today is being viewed through that context.”

Investors worried that uncertainty over the U.S.’s escalating trade war with China could cause the economy to stumble, hurting corporate profits.

The Trump administration has imposed a 25% tariff on $250 billion in Chinese imports. A pending 10% tariff on another $300 billion in goods would hit everything from toys to clothing and shoes that China ships to the United States, however some 60% of the new tariffs wouldn’t go into effect until mid-December, and others were taken off the table altogether.

Surprisingly strong quarterly results from several big retailers this week have given investors reasons to hope that consumers are still eager to spend despite the cloudy economic outlook.

L Brands was a notable exception. The owner of Victoria’s Secret and Bath & Body Works gave a third quarter earnings outlook that fell below what analysts expected. It shares slid 3.5%.

Another retailer, Overstock, surged 8.3% after its CEO resigned, saying he’d become “far too controversial” to helm the e-commerce company. Patrick Byrne’s resignation came after the company issued an bizarre statement last week in which the former CEO referred to the “Deep State,” called federal agents “Men in Black” and confirmed a journalist’s stories detailing his relationship with a gun-rights activist who was sentenced to prison for being an unregistered agent of Russia.

Boeing climbed 4.2% after a published report suggested the aircraft manufacturer plans to increase production of 737 jets in February if it receives clearance from regulators. The 737 Max was grounded following two crashes that together killed 346 people.

Report Shows US Deficit to Exceed $1 Trillion Next Year

Why Streaming Services Are the New Credit Card Rewards Binge