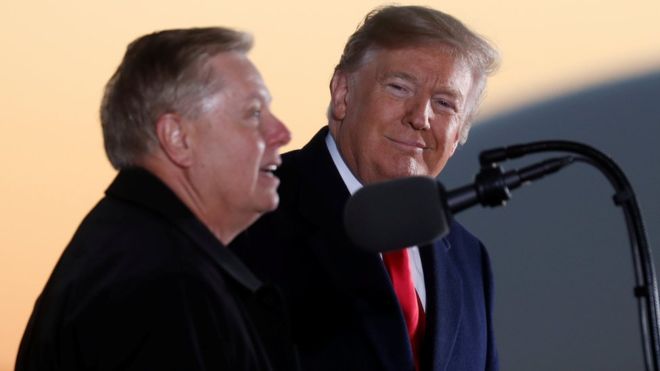 A senior US Republican has urged President Donald Trump to temporarily reopen parts of the government shut down for more than three weeks.

Senator Lindsey Graham, who is close to Mr Trump, said a limited re-opening of a few weeks would allow talks to resume between Republicans and Democrats.

The partial government shutdown has now become the longest in US history.

It has left hundreds of thousands of public workers unpaid and government offices closed.

President Trump is refusing to approve a budget unless it includes $5.7bn (£4.5bn) for a wall along the Mexican border – a key campaign pledge, which the president said that Mexico would pay for.

Democrats have rejected his request for funding to build it and say they will not negotiate further until the government is reopened.

Mr Trump has raised the stakes by threatening to declare a national emergency and circumvent Congress and get the money he wants.

What did Lindsey Graham suggest?

Mr Graham, chairman of the Senate Judiciary Committee, said he had urged the president on Sunday to temporarily reopen government to get negotiations started again.

He said if talks still failed to agree the funding, the White House could then declare a national emergency.

He said Mr Trump had told him: “Let’s make a deal, then open up the government.”

How far apart are the two sides?

Correspondents say pressure is building on Mr Trump as the dispute drags on, with opinion polls showing more Americans blame him for the shutdown than they do the Democrats.

But on Sunday Mr Trump was continuing to blame his opponents for the standoff.

“I’m in the White House, waiting. The Democrats are everywhere but Washington as people await their pay. They are having fun and not even talking!” he tweeted.

Several senior Democrats had been due to travel to Puerto Rico over the weekend for a winter retreat that also included a visit to a fundraising performance of the musical Hamilton.

The deputy chief of staff for Democratic House Speaker Nancy Pelosi, Drew Hammill, responded by tweeting: “Speaker Pelosi has been in DC all weekend working from the Capitol.”

How are workers affected?

On Monday the partial shutdown enters its 24th day.

About a quarter of the federal government is out of operation and last Friday 800,000 employees missed their first salaries of the year.

About 350,000 of those workers are furloughed – a type of temporary lay-off – but the rest are expected to continue to work.

Thousands have reportedly applied for unemployment benefits amid the financial uncertainty.

Over the weekend, part of Miami International airport was closed because of a shortage of Transportation Security Administration (TSA) agents caused by the shutdown.

The agents are “essential” federal workers and expected to work but many are calling in sick in protest at the situation, the Miami Herald reports.

On Sunday evening, Houston Bush airport stopped security screening at one of its terminals, due to a shortage of staff, and directed passengers to other terminals for security checks.

China to Collect Samples From Moon This Year