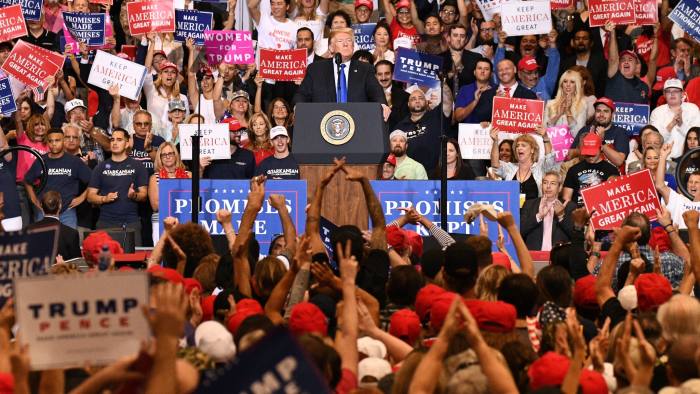 Regional markets including Japan and China shut for public holiday

What you need to know

European markets have opened lower, led by Germany’s Dax, down 0.4 per cent with carmakers including Volkswagen, BMW and Daimler AG among the main decliners.

The Euro Stoxx 50 slid 0.4 per cent in early trading. Energy shares are a bright spot as crude oil climbs, while financials and consumer discretionary sectors are both off 0.6 per cent.

Wall Street equity index futures are modestly lower indicating a further retreat from record territory for the S&P 500 at the open in New York.

Hong Kong stocks fell and the Australian dollar slipped after China rejected US calls for trade talks, while markets in mainland China, Japan, South Korea and Taiwan were shut for public holidays.

China at the weekend declined an invitation to explore a fifth round of trade talks with the US, after President Donald Trump last week imposed a 10 per cent tariff on about $200bn of Chinese imports starting from Monday, further souring relations with Beijing.

Robert Carnell, an ING economist, suggested Chinese authorities were awaiting the result of the US midterm elections. “With generic polls favouring the Democrats, they may feel that the trade environment will be less hostile after November 6,” he said. But he added: “In my view, this is far from certain. A poor result for President Trump at the midterms might instead encourage him to double-up a policy that has up to now won him some votes.”

Hong Kong stocks shed 1.64 per cent, with financials down 1.45 per cent and the technology sector sliding 1.95 per cent. The Hang Seng China Enterprises index of major Chinese companies listed in Hong Kong was down 2.1 per cent, with all sectors losing ground.

In Australia, the S&P/ASX200 was slightly lower, declining 0.1 per cent.

Please use the sharing tools found via the share button at the top or side of articles. Copying articles to share with others is a breach of FT.com T&Cs and Copyright Policy. Email licensing@ft.com to buy additional rights. Subscribers may share up to 10 or 20 articles per month using the gift article service. More information can be found at https://www.ft.com/tour.
https://www.ft.com/content/21c62640-bf8f-11e8-95b1-d36dfef1b89a

Trade worries weighed on the Australian dollar, which is seen as vulnerable to the US-China trade war, with the currency weakening 0.3 per cent to $0.7270 against its US counterpart.

The offshore Chinese renminbi rate was 0.25 per cent weaker at Rmb6.8657 to the dollar, while its onshore counterpart was not trading.

The dollar index, a measure of the greenback against a basket of currencies, held flat. The Japanese yen was flat at ¥112.59 per dollar.

The UK pound was a fraction higher at $1.3100 following its biggest one-day drop against the dollar in more than a year on Friday after Prime Minister Theresa May called on the EU to shift its position or risk a complete breakdown in Brexit negotiations. The euro was slightly weaker at $1.1748.

Neither US Treasuries nor Japanese government bonds were trading in Asia due to the holiday in Tokyo.

The Swedish Krona gained 0.2 per cent against the dollar ahead of the first meeting of its new parliament today following its inconclusive election earlier this month, which resulted in a narrow win for Sweden’s ruling party.

Fears over the outcome of the Italian budget continued to weigh on Italian bonds however. Italy’s benchmark 10-year government bond yield hit 2.87 per cent in early trading, up 4.7 basis points on the day. Italian two-year bond yields rose 4.9 basis points, hitting 0.78 per cent.

Oil prices climbed, with Brent crude up 1.99 per cent at $80.37 a barrel and West Texas Intermediate rising 1.70 per cent to $71.96 a barrel. The world’s largest oil producers on Sunday decided against an additional rise in output, despite calls from President Trump last week for Opec to “get prices down now”. Mr Trump urged the oil cartel to ramp up production to offset the effects of new sanctions on Iran.