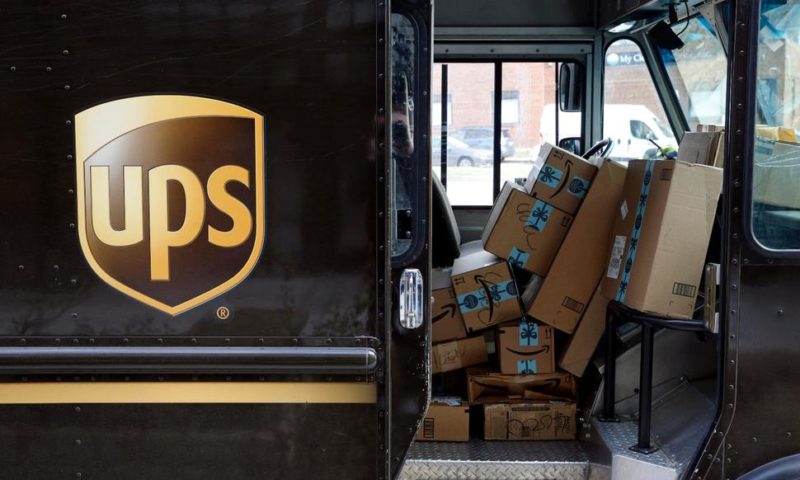 Shares of UPS rise after the company reports higher revenue during the key Christmas package-delivery season.

Atlanta-based UPS earned $453 million in the fourth quarter, including a $1.24 billion pension charge that executives blamed on volatility in the stock market in late 2018. Profit was down from $1.1 billion a year earlier.

Removing the pension charge and other items, UPS said it earned $1.94 per share, which easily beat the forecast of $1.58 per share among analysts surveyed by FactSet.

UPS has spent heavily over the past three years in new sorting centers and automation to increase package-handling capacity. Executives credited the investment for a better holiday season in 2018, with fewer major delays than the previous year. The company delivered an average of 21 million packages a day in the U.S. during the quarter.

The company expects to open or upgrade 18 more facilities this year, contributing to heavy investment — between 8.5 percent and 10 percent of revenue — that was supposed to end in 2018.

Daniel Sherman, an analyst with Edward Jones, said the benefits of that spending appeared to be showing up sooner than many investors had believed.

“That’s a big deal. That’s one of the reasons the stock price is up,” he said. Another, he added, is that “their international business was much better than what people expected.”

CEO David Abney said the company will weather a predicted slowdown among major economies as well as in exports caused by uncertainty over trade policy.

Abney said on a call with analysts that while UPS faces headwinds, it should also benefit from investing in its network and targeting small and medium-size business customers.