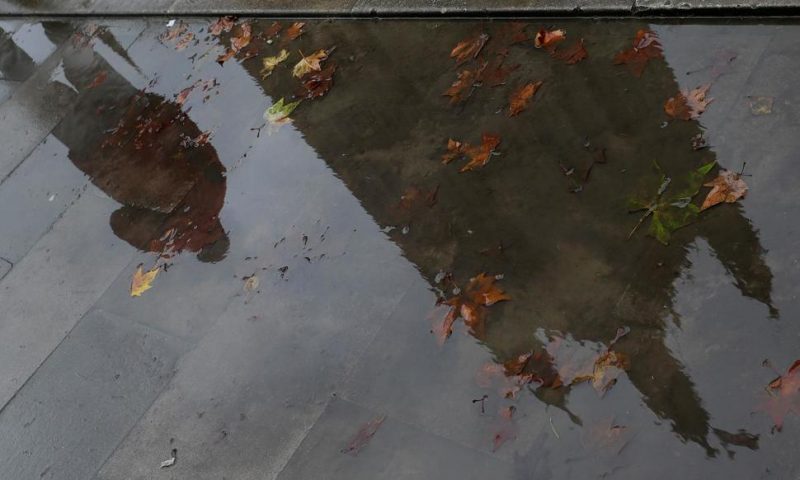 The speaker of Britain’s House of Commons has turned down the government’s bid for a new vote on its Brexit divorce deal, in a blow to Prime Minister Boris Johnson’s plan to take the country out of the European Union at the end of the month.

LONDON — THE Latest on Britain’s impending departure from the European Union (all times local):

The speaker of Britain’s House of Commons has turned down the government’s bid for a new vote on its Brexit divorce deal, in a blow to Prime Minister Boris Johnson’s plan to take the country out of the European Union at the end of the month.

Speaker John Bercow says the vote the government wants is “in substance the same” as one held on Saturday and so breaches Parliament’s rules. He said it would be “repetitive and disorderly” to allow a new vote Monday.

Johnson struck a deal with the 27 other EU countries last week. But on Saturday, lawmakers voted to delay their backing for the agreement until the legislation needed to implement has been passed.

The government plans to introduce its key Brexit bill later Monday, with lawmakers holding a first round of debates and votes on Tuesday. Johnson hopes to get the bill approved by Parliament before Oct. 31, the date when Britain is due to leave the EU.

But it’s unclear whether the government has either the votes or the time to meet the Brexit deadline.

An influential Brexit expert at the European Parliament says the legislature might even meet in an extraordinary plenary next week if that is what is needed to push the Brexit deal through.

The EU parliament is awaiting approval for the Brexit deal in the House of Commons, which could come in the next hours or days. After that, the EU could move speedily.

Greens lawmaker Philippe Lamberts said Monday that “we could ratify next week, if not this one.”

He added the Brexit deal could also spill into November, beyond the current Oct. 31 deadline for Britain to leave the EU.

British Prime Minister Boris Johnson has already asked for a Brexit extension even though he is still trying to get out of the EU by the end of the month.

Lamberts said the EU Parliament would try to be as pragmatic as possible to avoid a situation in which Britain crashes out of the bloc with no deal.

Scotland’s highest court says it could censure the British government if it tries to skirt its obligation to avoid a no-deal exit from the European Union at the end of this month.

Britain’s Parliament has passed a law compelling the government to seek a three-month delay to Brexit if an EU divorce deal was not in place by Oct. 19 — and to accept a delay if the EU offers.

The government says Prime Minister Boris Johnson as fulfilled that obligation by sending a letter on Saturday asking for the postponement. But Johnson also sent a second letter to the EU saying he personally opposed delaying Brexit any further.

Judges at the Court of Session in Edinburgh ruled Monday that the case should continue until the government’s obligations under the law have been complied with “in full.”

The European Commission says the fact that British Prime Minister Boris Johnson did not sign a letter requesting a three-month extension of the Brexit deadline has no impact on whether it is valid and that the European Union is considering the demand.

With British politicians squabbling over the U.K.’s departure from the EU, Johnson was forced by parliament to ask for a three-month delay to the Oct. 31 Brexit date.

Johnson sent the unsigned letter to EU Council President Donald Tusk late Saturday with a second note saying that he opposes any delay.

Commission spokeswoman Mina Andreeva said Monday that “President Tusk acknowledged receipt of the extension request on Saturday and, as he stated, he’s now consulting with the EU 27.”

Germany’s foreign minister says he does not want to exclude the option that there will be a “short, technical extension” for Britain’s departure from the European Union if there are problems with ratifying the latest Brexit divorce agreement.

British Prime Minister Boris Johnson grudgingly sent a letter seeking an extension of the Oct. 31 Brexit deadline after Parliament slammed the brakes on his effort to push through a new divorce deal.

German Foreign Minister Heiko Maas told reporters in Berlin on Monday that the question of “whether there can be an extension as a whole, if there is no majority in the House of Commons, has to be looked at within the European Union and can only then be decided.”

Maas said Germany and the EU don’t want Britain to crash out of the bloc with a no deal Brexit. He stressed that the current Brexit deal between the bloc and the U.K. about Britain’s departure “is balanced and fair.”

The prime minister of Montenegro — a small Balkan nation that is the next in line to join the European Union — has expressed hope that once Brexit is finalized the EU’s enlargement policy would regain importance.

Dusko Markovic tells The Associated Press that once the issue of Britain’s departure from the bloc is wrapped up it would “free the EU from a major problem” and herald “new opportunities for candidate countries” such as Montenegro. The Adriatic nation of 600,000 that is seeking EU membership after joining NATO in 2017 amid strong opposition from Russia.

But Markovic warns that the EU decision not to open membership negotiations with North Macedonia and Albania sends a negative signal to the volatile Western Balkan region, where Russia has stepped up efforts to regain historic influence.

A French official has not ruled out granting a new delay to Britain’s withdrawal from the bloc on condition that the U.K. clarifies its reasons for wanting a Brexit delay.

The deputy minister for European affairs, Amelie de Montchalin, told French news broadcaster BFM TV that “there is no new delay without any conditions, without justifications” like a parliamentary election or a new referendum on Brexit.

She said France doesn’t want the situation “to last forever” beyond the current Oct. 31 Brexit deadline.

French President Emmanuel Macron, who had a phone call with British Prime Minister Boris Johnson over the weekend, called for a quick clarification of the U.K.’s position. In a statement, he said a delay “would not be in any party’s interest.”

British Prime Minister Boris Johnson is expected to push for a vote on his European Union divorce deal as Parliament prepares for a week of guerrilla warfare over Brexit.

Johnson plans to kick things off by asking for a “straight up-and-down vote” on the EU divorce agreement on Monday, two days after lawmakers voted to delay approving the deal, according to his office.

House of Commons Speaker John Bercow could refuse to allow such a vote because parliamentary rules generally bar the same measure from being considered a second time during the same session of Parliament unless something has changed.

Johnson’s Conservative government will also introduce the legislation necessary to implement the Brexit agreement, opening the door to potentially lengthy debates and amendments that could scuttle the deal.

Germany’s economy minister is suggesting it will be a few days before the European Union decides whether to grant a delay to Britain’s withdrawal from the bloc.

British Prime Minister Boris Johnson grudgingly sent a letter seeking an extension of the Oct. 31 Brexit deadline after Parliament slammed the brakes on his effort to push through a new divorce deal.

German Economy Minister Peter Altmaier noted on Deutschlandfunk radio Monday that Johnson’s government will attempt to get a vote on the deal this week. He added “we will have somewhat more clarity in the coming days, and we will then exercise our responsibility and quickly make a decision.”

He said he wouldn’t have a problem with an extension by “a few days or a few weeks” if that rules out a no-deal Brexit.