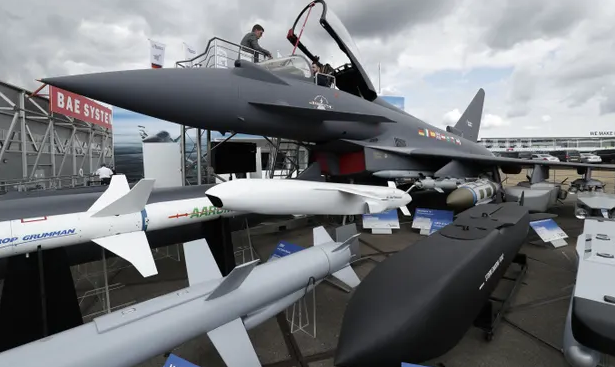 British defence exports rose to a record £14bn in 2018, with sales to Saudi Arabia, the UAE, Qatar and other countries in the Middle East accounting for nearly 80% of that figure, official figures reveal.

Campaigners said the statistics, released on Tuesday, showed that Britain was “arming and supporting repressive regimes”, while the Department for International Trade (DIT) said they demonstrated that the UK had returned to its position as the world’s second largest arms exporter after the US.

Defence orders rose by £5bn to £14bn, making it the biggest year since records began in 1983. That increase was helped by a £5bn order for Typhoon fighters made by BAE Systems, plus Paveway missiles from Raytheon that are partly made in the UK.

Campaign Against Arms Trade said the figures “exposed the rank hypocrisy at the heart of UK foreign policy. The government claims to stand for human rights and democracy, but it is arming and supporting repressive regimes and dictatorships around the world.”

Britain’s sales to Saudi Arabia – believed to be the largest arms buyer – are the subject of an ongoing legal battle. Ministers have asked the supreme court to overturn a lower court’s judgment that some of the arms sales to Riyadh were conducted illegally.

In June, the court of appeal concluded the sales of arms that could have been used by Saudi Arabia’s air force in Yemen were unlawful because ministers had failed to examine whether, in targeting civilians, the country was in breach of international humanitarian law.

The DIT estimates the UK’s share of the defence export industry to be about 19%, placing it second for the first time since 2014, pushing Russia into third place and sitting comfortably ahead of fourth-ranked France.

The world leader is the US, which has a share of about 40%, according to the British estimates in the annual statistics published by the DIT, which is the licensing authority for arms exports.