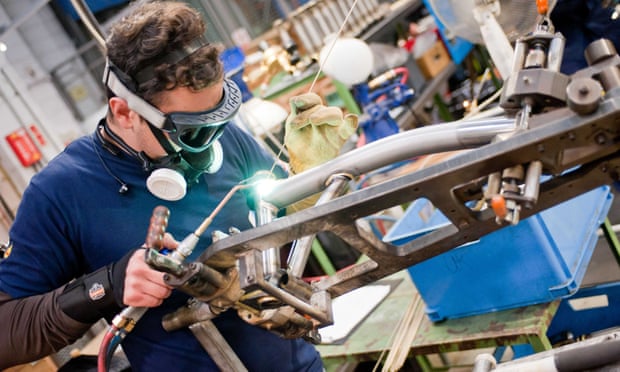 Firms under strain as they tie up money in stockpiling materials, says Santander

British manufacturers are being forced to build up financial buffers in preparation for a no-deal Brexit as the cost of stockpiling goods and materials puts companies under strain.

Measures taken by manufacturers to prepare for a disorderly exit include creating cash cushions and taking out working capital loans to cover the costs of stockpiling.

Manufacturers have already spent millions storing raw materials and finished products in case a no-deal Brexit causes delays at the border, tying up money that would otherwise be used to run day-to-day operations. Airbus and Brompton Bicycle are among the UK-based manufacturers that have started stockpiling as 29 March looms.

Paul Brooks, the head of manufacturing at Santander UK, said: “In recent months we have seen manufacturers choosing to build up cash reserves and delay investments due to uncertainty over the economy’s outlook.

“We are working closely with our manufacturer customers to support them through this period, including helping them to manage their cashflow, spread the cost of buying assets and explore export opportunities in new international markets.”

Recent figures show lending patterns consistent with stockpiling by manufacturers. The Bank of England’s fourth-quarter survey of UK credit conditions showed that demand for “inventory finance”, in which loans are secured against stock, rose much faster than average in the final quarter of 2018 after hitting a three-year high in the previous quarter. Overall demand for borrowing from manufacturers rose by 7% in the year to November, to £18bn, according to data from UK Finance, the banking industry body; bucking the trend of falling demand for loans in most other sectors.

The financial strain from Brexit preparations is spread throughout manufacturing supply chains. Demand for new lending facilities is particularly acute among smaller companies, which often only have a single banking relationship, a senior banker said.

There is also evidence of payments deadlines being squeezed by suppliers and stretched by customers, said the banker, further increasing the default risks borne by smaller firms.

Manufacturers, from the largest companies such as Airbus to much smaller suppliers, have warned repeatedly that a no-deal Brexit would harm British industry by delaying goods at the border. EEF, the manufacturing lobby group, said 60% of the companies it surveyed were looking to stockpile goods in case supplies dry up. At least a quarter are already doing so.

Stephen Phipson, the EEF chief executive, said British companies were “ramping up their contingency operations” in the face of “terrifying uncertainty”.

He said: “Increasingly, companies are conducting in-depth audits of their supply chains to make cost efficiencies, while many are also reshoring where possible. We continue to talk to banks and other financial institutions on behalf of our members in order to make sure they have the financial support necessary for this extra expenditure.”

British manufacturers have reached a “point of maximum uncertainty” on Brexit, one banker said, with the future of the trading relationship between the UK and the EU unclear before the 29 March exit date after the government’s preferred deal suffered a historic defeat in parliament.

Stephen Pegge, UK Finance’s managing director for commercial finance, said: “Businesses have been building up their cash deposits and tend to be slower to draw down on lending facilities. This suggests firms are exercising caution in the face of ongoing economic uncertainty.”

However, banking industry insiders are confident that British lenders will be able to continue to lend to companies even if no deal is reached. The Bank of England said in November that its stress tests showed that Britain’s largest banks would be able to lend to companies even if a no-deal Brexit causes a worse decline in the UK economy than the 2008 financial crisis.

May battles to keep Brexit