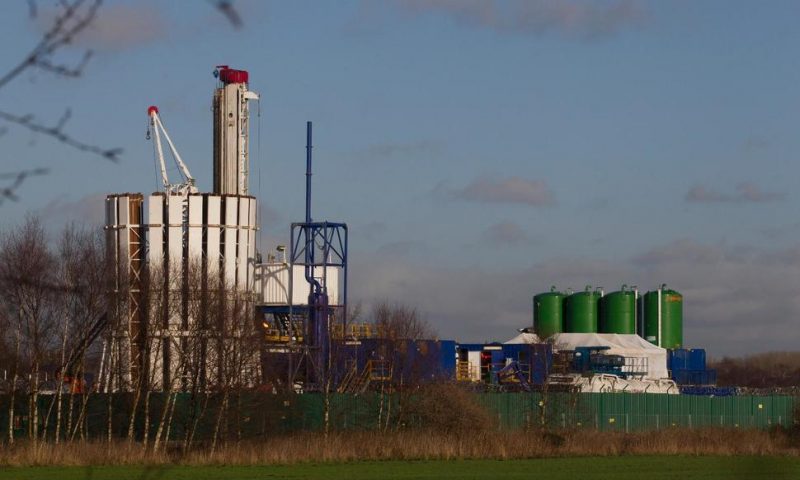 The British government has announced that it will no longer allow fracking because of new scientific analysis that casts doubts on the safety of the controversial practice, but some critics call the move an election stunt and demand a permanent ban.

LONDON — The British government announced Saturday that it will no longer allow fracking because of new scientific analysis that casts doubts on the safety of the controversial practice, but some critics called the an election stunt and demanded a permanent ban.

The government said the decision was based on a finding by the Oil and Gas Authority that it is not possible to clearly predict the likelihood or severity of earthquakes linked to fracking operations.

The decision to announce a moratorium on fracking means the government will no longer support the use of fracking for shale gas extraction and fracking planning proposals will not be moved forward.

“For this reason, I have concluded that we should put a moratorium on fracking in England with immediate effect,” she said.

The government’s new position was announced at the start of what is expected to be a hard-fought campaign ahead of a Dec. 12 national election. There have been considerable protests against fracking in recent years.

The announcement drew praise from local activists and environmental groups although some called for a permanent ban on the practice, not just a halt in the approval process..

Activist Maureen Mills from the Halsall Against Fracking group, said the decision was welcome because fracking had taken an “immeasurable” toll on her region of northwestern England.

“Our communities are left physically and mentally drained and devastated. For what? Years of anguish, research, protest, tears and fears,” she said. “Stopping this industry has always been our goal and our reasons are now being taken seriously.”

But politicians from the opposition Labour Party and the Liberal Democrats warned that the government’s reversal on fracking may be a temporary ploy to garner votes during the upcoming national vote.

Labour Party housing adviser John Healey told the BBC the ban “appears to be temporary” and may be reversed later if Prime Minister Boris Johnson remains in power after the vote.

“This may not be a real reprieve,” he said. “You’ve got to remember that Boris Johnson once said he wanted to leave no stone unturned and no stone unfracked, so this I fear could be a gambit at the start of the election and we may see that he does something different to what he says now.”

Rebecca Newsom, head of politics at Greenpeace, said fracking has no future in Britain because of widespread opposition.

“Opening up a new fossil fuel industry in this climate emergency was always an awful idea and it’s only seemed worse as the industry has lurched from mishap to disaster,” she said. “Grass roots activists across the country deserve huge credit.”