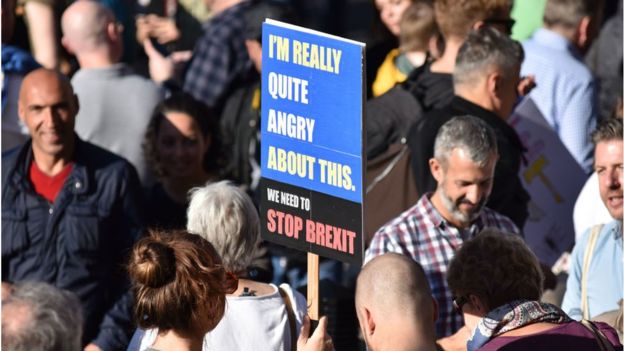 Businesses are becoming exasperated at the lack of progress in Brexit talks and are pausing or cancelling investment in the UK.

A week that many had hoped would bring progress in the talks has now come and gone without a breakthrough.

Employers group the CBI says 80% of surveyed members feel Brexit uncertainty has already had a negative impact on investment decisions.

On Friday, Theresa May held a conference call with 150 top bosses.

She wanted to reassure them that she was still confident of striking a deal and that she recognised their concerns.

The chief executive of one company on the call told the BBC the PM had “done a good job and had a reassuring tone” while another said there had been “nothing new in her message”.

Of the members surveyed by the CBI, 39% said they would trigger additional contingency plans if there was no further clarity by November, while a further 19% said it was already too late.

Nicole Sykes, the CBI’s head of EU negotiations, says the situation is urgent, pointing to concrete examples of cancelled projects: “We heard from a fashion house that wanted to set up a new factory in the UK. £50m of investment, cancelled.

“But we’re also talking about some small things. We heard from a Northern Ireland farmer who wanted to build a new machine to make their operations more efficient, grow competitive. Again, that’s been cancelled. So we really are talking about real economic consequences.”

Despite the PM’s attempts to calm nerves, many businesses are in the process of stepping up their preparations for leaving the EU without a deal at the end of March next year.

Supermarket executives told the BBC they were weighing up the viability of flying in fresh food from outside the EU to avoid potential log jams at the ports like Dover.

One said: “We haven’t started chartering aircraft yet but we are looking at it. We are very worried about Dover so we are also looking at alternative ports like Felixstowe as an alternative.”

Another major supermarket executive said that air freight isn’t the answer: “There simply isn’t the capacity at a moment when every other industry will be trying to do the same thing.”

However, they felt that the problem is potentially so severe that they do not believe it will come to that.

“There is no way the UK or EU would allow the UK to run out of food, but we are looking at alternative ways to transport fresh food, as stockpiling is not an option.”

Industry body the SMMT described the lack of progress in talks as hugely disappointing and said it had “grave concerns”.

Car makers are looking at alternative ports, increased warehousing and moving the supply of some parts outside the UK.

BMW has already brought forward an annual shutdown of Mini production to coincide with the UK’s departure from the EU, while Jaguar Land Rover has warned of the potential loss of tens of thousands of UK jobs.

It’s not just business which is pessimistic about a deal being struck in time.

International Trade Secretary Liam Fox this week reiterated his prediction that a no deal scenario was more likely than not.

He also told a gathering of business leaders this week that great opportunities in international trade await the UK outside the EU.

Most of the audience that night will hope he got the first bit wrong.