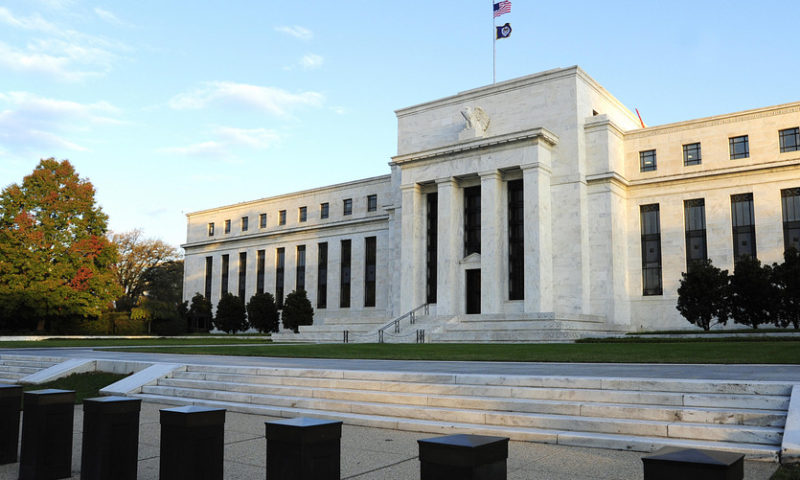 All eyes are on the Federal Reserve

U.S. stocks rose modestly at the start of trade Wednesday, as investors await the outcome of a key policy announcement from the Federal Reserve, due at 2 p.m. Eastern.

How are the benchmarks faring?

Investors are expecting the Federal Reserve to help calm in some way what has been a tumultuous atmosphere for markets in recent weeks as the central bank’s interest-rate setting committee, the FOMC, concludes its final two-day meeting of the year Wednesday, with an announcement on whether it will raise interest rates due at 2 p.m.

CME Group data, gauging Federal-funds futures, indicate an 66.3% likelihood that the Fed will raise rates 0.25% Wednesday, as prominent voices, including the Wall Street Journal’s editorial page, called for the Fed to pause amid signs of slowing economic growth.

But if the Fed does hike, investors hope the central bank will make dovish noises on future policy intentions. Investors will be watching closely for the Fed’s statement that accompanies the interest-rate decision, as well as a news conference at 2:30 p.m., at which Federal Reserve Chair Jerome Powell will discuss future interest rate increases.

Meanwhile, U.S. Treasury Secretary Steven Mnuchin gave investors reason for optimism regarding U.S.-China trade relations, when he said the U.S. and China will meet in January to broker a trade-war truce, in an interview with Bloomberg News on Tuesday. Previously, the Trump Administration hadn’t given a specific timetable for face-to-face negotiations.

The interview helped power technology stocks higher in late-Tuesday trade, but the ability of policy makers to instill lasting investor confidence with reassuring words, but not concrete policy changes, has been waning in the weeks since President Donald Trump and Chinese President Xi Jinping last met on the sidelines of a recent G-20 summit.

Mnuchin also said he blamed market volatility on the effect of the financial-crisis-era Volcker rule and high-frequency trading, which he said combined to sap liquidity in the market.

What are the strategist saying?

”Every bull market ends with a Fed policy mistake—it’s just the way it is. Evidence is mounting that we may be on the cusp of that policy mistake, as it appears the Fed has overestimated the strength of the economy amidst several headwinds,” Tom Essaye, president of the Sevens Report wrote in a Wednesday note to clients.

“To be clear, current economic data remains, generally, solid. But the marginal direction of change has turned decidedly lower,” he wrote.

He went on to argue that the major unknown variable is whether or not the Fed will stick to its policy of gauging the economy using hard, but backward-looking, data on economic and job growth, or will “recognize that, over the past few months, a serious economic headwind has kicked up.” Those barriers are evidenced by slowing growth abroad, declining inflation expectations and oil prices that have fallen more than 30% over the past three months.

Essaye places a 70% probability that the Fed will raise rates Wednesday, but that the decision will be accompanied by dovish changes to the policy statement and predictions of the future path of interest rates.

Shares of FedEx Corp. FDX, -9.81%   are falling 8.1% Wednesday, after the logistics company announced Tuesday evening that it was lowering its guidance for 2019 and that it was starting a voluntary buyout program for some U.S. workers.

Facebook Inc. FB, -0.65%   stock is in focus after the New York Times reportedthat the company shared user data with large tech companies to a greater degree than it had previously disclosed. The stock is down 1% in Wednesday-morning trade.

Pfizer Inc. PFE, +0.29%   shares are rising 0.8%, after the firm announced a plan to combine its consumer health unit with that of GlaxoSmithKline Plc, GSK, +3.41% with Pfizer taking a minority stake in the new enterprise.

Shares of Medtronic Plc MDT, +0.48%   are up 0.6% early Wednesday, after the firm announced the completion of a $1.7 billion deal to acquire Mazor Robotics.

What data are in focus?

Other than the Fed decision due at 2 p.m. Eastern Time, investors are also looking forward to the National Association of Realtors estimate for existing home sales in the month of November, to be released at 10 a.m.

The Commerce Department reported that the U.S. trade deficit increased to $124.8 billion in the third quarter, up from $101.2 billion the second quarter of 2019.

How did the benchmarks trade yesterday?

Optimism didn’t exactly extend to Asian markets, which were a mixed bag with Japan’s Nikkei NIK, -0.60% shedding 1% and China’s Shanghai Composite IndexSHCOMP, -1.05% off 0.4%.