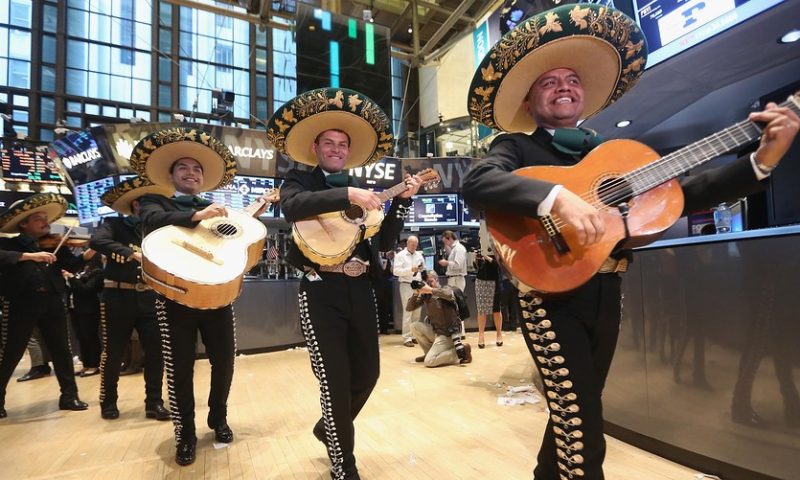 U.S. stocks advanced to close at new all-time highs Tuesday, as investors focused on U.S.-China trade talks and an upbeat assessment of the economy from Federal Reserve Chairman Jerome Powell.

Tuesday’s action marked the 10th record close of the month for all three major indexes.

Stocks have been sensitive to developments in the long-running U.S.-China trade battle and have been largely in rally mode since October, after Washington and Beijing signaled they were working toward a partial deal aimed at resolving less controversial issues. Still ahead is an important Dec. 15 deadline, when a new round of U.S. tariffs on Chinese imports are due to take effect.

During an Oval Office event Tuesday, U.S. President Donald Trump said that Washington was in the “final throes” in its efforts to reach a trade deal with China, but also underscored that Americans stand with pro-democracy protesters in Hong Kong.

“With global central banks pumping liquidity into the system and investors sensing that a trade deal is coming, that could create more upside,” Yousef Abbasi, director of U.S. institutional equities at INTL FCStone, told MarketWatch. “The market is telling us that the status quo is fine — we can live with no deal in 2019 as long as we don’t see any new tariffs and the rhetoric stays on the friendly side.”

Abbasi also said that equity markets’ upward trajectory could be sustained by calendar effects, during a holiday week and heading into the final month of the year. “As you start to get to the period of light volumes and lighter news flow, what tends to happen is that as long as systematically markets are working, they’ll keep up the trend they’ve been on.”

Meanwhile, Fed Chair Powell, in remarks Monday evening, outlined an optimistic view of the U.S. economy but signaled that low inflation would likely keep interest rates low. The Fed chief said that the central bank’s three rate cuts this year have helped to spur home purchases, contributing to the economy’s longest expansion on record. On Tuesday Federal Reserve Board Gov. Lael Brainard called for a major overhaul in how the Fed sets U.S. interest rates, while speaking Tuesday at the New York Association for Business Economics.

In U.S. economic data, the trade deficit fell 6% to $66.5 billion, versus expectations of $70.3 billion, according to a MarketWatch poll of economists, but the U.S. is still likely to post the biggest trade deficit in 2019 in 11 years.

Consumer confidence fell in November for the fourth month in a row, with the Conference Board’s index falling from 125.5 from 126.1 in October, below economists expectations of a 128.2 reading, according to a MarketWatch poll. New-home sales fell in October to a seasonally adjusted annual rate of 733,000, from 738,000 in September. But the Case-Shiller home-price index for September showed home prices rising nationally at a 3.2% annual pace, up from a 3.1% rise in August.

Walt Disney Co. DIS, +0.15% shares led the Dow’s advance and reached a record high after a report found that close to a million new subscribers a day are signing up for its newly launched digital streaming service, Disney+, less than two weeks after its initial rollout.

Shares of Burlington Stores Inc. BURL, +1.28%  added 8.5% after the company reported a stronger-than-expected rise in third-quarter same-store sales and earnings and revenues that topped estimates.

Shares of Chinese e-commerce giant Alibaba BABA, +1.86% jumped in their debut on the Hong Kong stock exchange on Tuesday, an upbeat launch amid unrest in the former British colony.

Xerox Holdings Corp. XRX, +0.69%  shares edged lower after the company said it will take its $33 billion takeover proposal for larger rival HP Inc. HPQ, +0.00%   directly to shareholders unless the two sides are able to agree on access to private financial information.

Shares of Teva Pharmaceutical Industries Ltd. TEVA, +1.46%, Mallinckrodt MNK, +2.31%,   Amneal Pharmaceuticals Inc. AMRX, +2.00%, and Johnson & Johnson   JNJ, +0.44%  and other opioid makers and distributors dropped after the Wall Street Journal reported that the government had launched a criminal probe into corporate ties to the opioid crisis.

Shares of Dollar Tree DLTR, -1.03%, the poorest performer on the S&P 500 and the Nasdaq, plunged 15% after the discount chain’s weaker-than-expected third quarter earnings, but held to its full-year sales forecasts, and it also warned that import tariff increases and store closure costs would trim its bottom line.