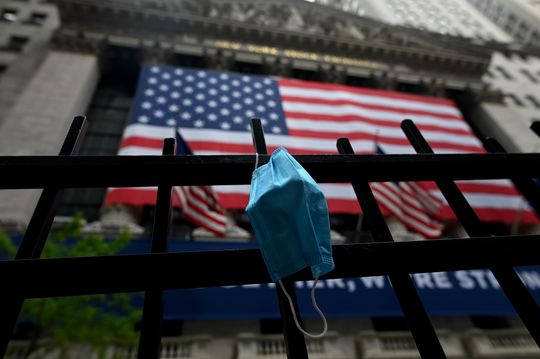 For the week, the Dow slid 2.2% and is down for two consecutive weeks. The S&P 500 lost 1.7% this week, its longest losing streak since Monday, February 22, 2021 when the market fell for five straight trading days. The Nasdaq declined 1.6% this week, its largest one week percentage decline since the week ending July 16, 2021, according to FactSet data.

Apple Inc. AAPL led the Dow lower when a federal judge in the Epic Games Inc. case issued an injunction that said the company can no longer force developers to use its payment system, effectively bypassing commission fees of 15% to 30%. However, the iPhone maker was not ruled an antitrust monopolist.

“The bullishness is fading quickly,” said Steve Sosnick, chief strategist at Interactive Brokers, in a phone interview Friday. “It’s a seasonally awkward time for the market.”

The week’s trading action comes amid concerns about the impact of the coronavirus delta variant on global economic growth in recent months.

Biden on Thursday announced new vaccine mandates, including a requirement that executive-branch employees as well as federal contractors vaccinate, with no test alternative. He is also discussing a Labor Department rule requiring businesses with 100 or more workers to ensure their employees are vaccinated or show a negative test result weekly or more frequently.

The U.S. is averaging just under 150,000 new cases a day, with only 53% of the population fully vaccinated, which is well behind many countries in Europe and Canada, according to a New York Times tracker.

While the focus is on rising COVID cases, markets are also watching the Federal Reserve for an indication of when it might taper its bond-buying purchases. Investors will have to wait until Sept. 21-22 for the next Federal Open Market Committee meeting. However, there is already speculation that the Fed will set the stage at its next meeting for an announcement of a plan to taper its monthly asset purchases at its November gathering, according to The Wall Street Journal.

With the stock market near record highs, some investors are growing concerned about the end of “some of the massive stimuli” that have pushed the market higher, including fiscal and monetary stimulus programs introduced during the pandemic, according to Sosnick. He said that he’s seen “very solid bids for puts protection” in the options market, which is a form of  “insurance” for investors seeking to protect their portfolios from a possible decline in stocks.

Meanwhile, the U.S. producer-price index rose 0.7% in August, above average forecast of economists for a 0.6% rise, but down from a 1% jump in July. Overall producer prices were up 8.3% in August from a year earlier though, up from 7.8% in the prior month. That’s the largest gain since the data was first collected in November 2010.

“We are still seeing inflationary pressures,” said Lauren Goodwin, economist and portfolio strategist at New York Life Investments, in an interview Friday. She said the PPI data is more evidence in favor of a strategy that buys stocks of companies that can pass higher costs to their customers.

“The extent that we see flow through to the consumer remains to be seen, but this is another shot to the transitory narrative that has been the dominant reason to continue emergency fed policy,” wrote Sean Bandazian, investment analyst for Cornerstone Wealth, in emailed remarks on Friday.

A number of Fed officials have described inflation as short-lived and economists are starting to talk about prices peaking in the wholesale sector. But producers are still struggling with shortages, bottlenecks and transportation woes.

Joe LaVorgna, chief economist of the Americas at Natixis, also noted that inflation has the potential to be a much longer-term concern that has negative implications for financial markets.

“With the economy already having recouped the entire amount of its pandemic-related losses and the labor market experiencing record demand for workers, the potential for a permanent regime shift in inflation is high,” the economist wrote in a Friday research note along with colleague Troy Ludtka.

Goodwin told MarketWatch that she remains “fairly constructive” on markets as the economic recovery moves “mid-cycle” with the delta variant “slowing but not derailing” growth. But she said “our conversations with clients and investors point to high and really growing anxiety” over the paths ahead for the economy and markets.

Intuit to buy Mailchimp for around $12 billion

EngageSmart IPO terms could value company at up to $4.0 billion