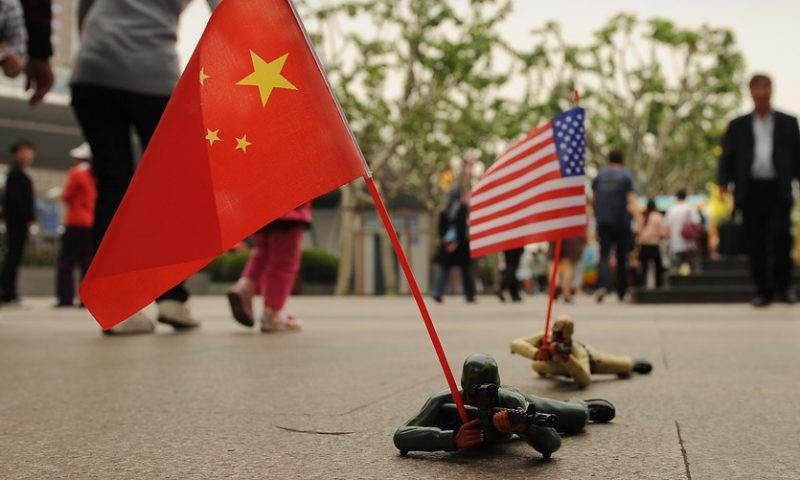 The U.S. dollar on Friday sunk to its lowest level in three weeks, hours after the U.S. officially increased tariffs on $200 billion worth of Chinese goods.

The tariffs, which increased to 25% from 10%, kicked in at 12:01 a.m. Eastern Time on Friday. U.S. and Chinese officials subsequently met briefly. Treasury Secretary Steven Mnuchin told reporters after meeting China’s top negotiator, Vice Premier Liu He, that talks were “constructive,” but offered no further characterization.

“Dollar bulls were nowhere to be found today despite the United States increasing tariffs on $200 billion worth of Chinese goods,” wrote Lukman Otunuga, research analyst at FXTM.

“The dollar’s weakness could also be based on the fact U.S. inflation figures for April disappointed market expectations by cooling 0.3% month-on-month.”

Consumer prices in the U.S. rose 0.3% in April, according to the Bureau of Labor Statistics. Economists polled by MarketWatch had forecast a 0.4% increase. Core CPI, which strips out food and energy, rose 0.1%.

Escalating trade tensions between the U.S. and China saw the offshore yuan,USDCNH, +0.0965% hit a fresh 4-month low at 6.8649 versus the greenback.

The Office for National Statistics said the U.K. economy shrank 0.1% in March, but grew 0.5% in the first quarter, taking its annual growth rate to 1.8%.

“The reaction on sterling has been muted mostly as markets are focusing on cross-party talks around possible Brexit outcomes and the Bank of England’s hesitance towards any key rate decision until there is more political clarity,” wrote Daniela Sabin Hathorn, analyst at Daily FX.

The Turkish lira rallied more than 3% after German newspaper Bild reported that Turkish President Recep Tayyip Erdogan would not buy the Russian-made S-400 missile defense systems, a move that would have likely resulted in sanctions from the U.S. The lira hit an intraday high at 5.9599.

The Canadian economy added 107,000 jobs in April, the largest monthly gain since Statistic Canada began tracking employment data in 1976. The better-than-expected data saw the loonie USDCAD, -0.4452%  trade to a session high at C1.3384.