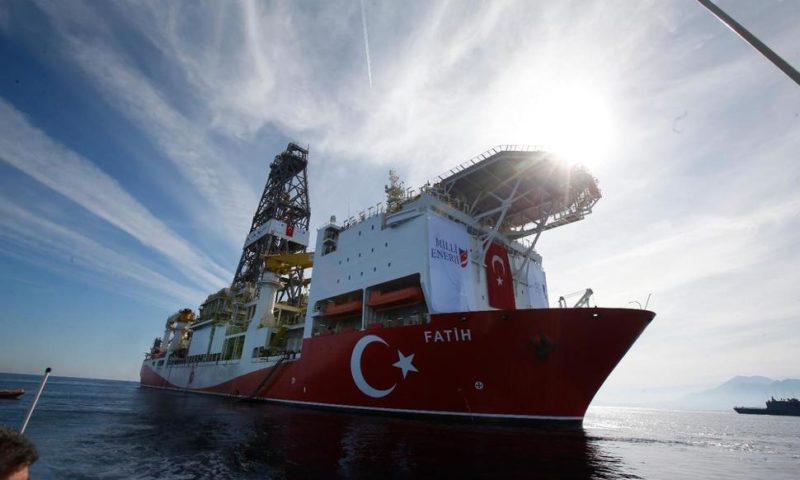 Turkey says it has begun a search for oil and gas in east Mediterranean waters in a move that could stoke regional tensions.

ANTALYA, Turkey — Turkey embarked on a search for oil and gas in the east Mediterranean on Wednesday in a move that could stoke regional tensions, with the country warning it would thwart “unilateral, illegitimate and unfair” actions against its interests.

The country is asserting itself in the east Mediterranean to signal that it won’t be left out of a potential offshore gas bonanza as neighboring Cyprus is poised to renew exploratory drilling off its southern shores. ExxonMobil is scheduled to start drilling in one of 13 blocks inside Cyprus’ exclusive economic zone by year’s end.

Turkey doesn’t recognize Cyprus as a state and opposes its gas search, which it says infringes on its rights to oil and gas reserves and ignores the rights of breakaway Turkish Cypriots to the ethnically split island’s natural resources. Turkey also says that its continental shelf overlaps part of Cyprus’ exclusive economic zone.

Cyprus was divided in 1974 when Turkey invaded in response to a coup by supporters of union with Greece. Only Turkey recognizes a declaration of independence by Turkish Cypriots in the island’s north, where it maintains more than 35,000 troops.

“We would protect until the end our and the Republic of Northern Cyprus’ rights…against those attempting to take unilateral, illegitimate steps that are unfair to Turkey,” said Turkey’s Energy and Natural Resources Minister Fatih Donmez during a tour of the ‘Conquerer’ on Tuesday.

In February, Turkish warships prevented a drillship from carrying out exploratory drilling southeast of Cyprus, where Italian company Eni is licensed to search for gas. Days earlier, Eni had announced a significant find southwest of Cyprus.

Tiny Cyprus, with a population of just over a million people, rejects Turkey’s claims. It says its gas search is fully in line with international law and says Turkey is trying to create a crisis to undermine Cyprus’ energy program.

Cypriot government spokesman Prodromos Prodromou said any potential wealth from newly discovered gas deposits belongs to all Cypriots — both Greek Cypriot and Turkish Cypriot — and will be shared once a peace accord reunifying the island is reached.

“Whatever is found in the exclusive economic zone of the Cypriot state is the property of the Cypriot people, meaning all legal citizens of Cyprus, which includes Turkish Cypriots but not necessarily Turkey,” said Prodromou.

Asian Shares Rise on Hopes for Chinese Stimulus for Economy