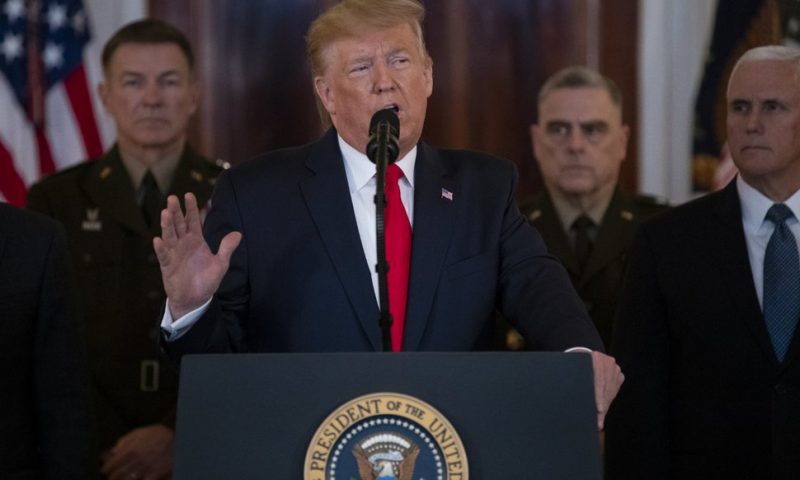 In a national address, the president said he would not pursue a military response but threatened sanctions against Iran.

PRESIDENT Donald Trump expressed relief and optimism in a high profile national address Wednesday morning saying the Iranian missile strike against U.S. bases in Iraq the night before resulted in no casualties, before announcing new sanctions that he said would remain if Tehran does not change its behavior.[

“The American people should be extremely grateful and happy,” Trump said in remarks at the White House, flanked by members of the Joint Chiefs of Staff, Vice President Mike Pence, Defense Secretary Mark Esper and Secretary of State Mike Pompeo. “No Americans were harmed in last night’s attack by the Iranian regime.”

All soldiers in Iraq are safe, Trump said, and damage sustained at U.S. military bases in Anbar Province outside Baghdad and near the northern Kurdish capital of Irbil was minimal.

Trump’s comments on Wednesday stood in stark contrast to other recent statements warning Iran against retaliating for Soleimani’s killing. On Jan. 4, following the decision to kill the Iranian general, Trump pledged: “They attacked us, & we hit back. If they attack again, which I would strongly advise them not to do, we will hit them harder than they have ever been hit before!” On New Year’s Eve, prior to the attack, Trump wrote on Twitter, “Iran will be held fully responsible for lives lost, or damage incurred, at any of our facilities. They will pay a very BIG PRICE! This is not a Warning, it is a Threat. Happy New Year!”

Iran confirmed late Tuesday that the strike, involving dozens of missiles fired from its territory, served as an act of retribution for Trump’s decision to kill Soleimani last week – among the most consequential actions in a military escalation between the two countries in recent weeks.

By Wednesday morning, however, both sides appeared unwilling to continue the military escalation which could result in all-out war in a part of the world already ravaged by conflict.

The president’s conciliatory tone soon gave way to new threats against Iran, blasting its behavior since signing the 2015 nuclear agreement that Trump withdrew the United States from in 2018. On Wednesday he directed other signatories, including the EU, Germany, France, Russia and China, to walk away from the deal and claimed without providing evidence that the Iranian funds that were unfrozen as a part of the nuclear deal were used to pay for Tuesday’s missile strike.

Trump also reiterated condemnation of Soleimani’s activities, saying the leader of the zealous foreign wing of Iran’s Islamic Revolutionary Guards Corps known as the Quds Force “should have been terminated long ago.”[

“By removing Soleimani we have sent a powerful message to terrorists: If you value your own life, you will not threaten the lives of our people,” Trump said. “The U.S. will immediately impose additional, punishing economic sanctions on the Iranian regime.”

“Those powerful sanctions will remain until Iran changes its behavior,” Trump added, without offering specifics.