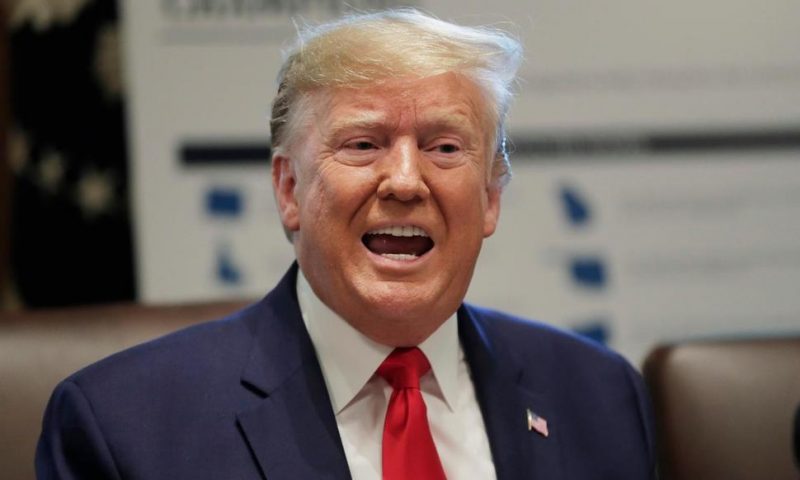 President Donald Trump is lamenting that he was forced to move next year’s Group of Seven summit from his private golf club in Florida after bipartisan criticism.

WASHINGTON — President Donald Trump lashed out Monday at critics who prompted him to move next year’s Group of Seven summit from his golf club in Florida, saying “Democrats went crazy” with criticisms that he would have violated the “phony emoluments clause” of the Constitution.

“I was willing to do this for free,” Trump said during a Cabinet meeting on Monday, comparing it to his decision not to take his $400,000 presidential salary. But now, he said, “It will cost a fortune for the country.”

At one point, he lamented, “You people with this phony emoluments clause.”

He brushed aside the criticism that, even without accepting payments, hosting the summit at his Trump National Doral near Miami would have been one big promotion for his brand. “You don’t think I get enough promotion? I get more promotion than any human being that’s ever lived,” he said.

Trump reversed course Saturday on hosting the G-7 at Doral after Republicans joined Democrats in raising alarm about self-dealing and violating the emoluments clause that bans presidents from receiving gifts or payments from foreign governments. His acting chief of staff, Mick Mulvaney, said that the president had realized that “it looks lousy” to steer business to his own property.

In a moment of introspection, Trump said Monday that the Doral had taken a hit — “It went from doing great to doing fine” — because of his divisive rhetoric about immigration and other issues. The resort is the biggest revenue generator of his 17 golf properties, but the PGA and other organizations have pulled events that used to be held there and his company has told local authorities that they should cut its tax bill because it is underperforming.

Mulvaney said last week that Doral was “far and away” the best venue because of its location near the Miami airport and separate buildings to host each country’s delegation.

Mulvaney listed eight states visited in the screening process, including Tennessee, North Carolina, Hawaii, California, Michigan and Utah. But spokespeople for governors and tourism officials in nearly all those states told The Associated Press they weren’t aware of any visits, with some saying they didn’t even know their states were in the running. Only Hawaii said it was aware that the White House had conducted a “general search.”

White House officials declined to name the properties they had considered or provide details on how they vetted them. But the AP reached out to several major hotels and resorts in those states. Of those that would comment, only one confirmed it had received a visit from a White House team, the Grand Hotel in Mackinac Island, Michigan. It declined to say whether it was back in the running now that the Doral has pulled out.

Trump had earlier tweeted that a possible alternate location was the presidential retreat at Camp David, Maryland, the site of the G-7 summit in 2012. That was surprising given that Mulvaney earlier described Camp David as way too small and remote and a “miserable place” for a G-7.

Asked at the Cabinet meeting where the summit will be held now, Trump said that the search team would look at other locations, but regardless, “I don’t think it will be as exciting.”