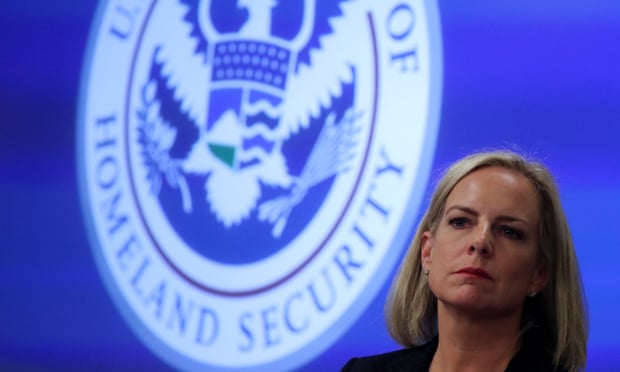 Citing an “overwhelmed” asylum system, the Trump administration on Thursday announced new restrictions on asylum-seekers at the border with Mexico, in a move that experts said violated immigration laws.

The new regulation declares that people can apply for asylum along the US-Mexican border only at official ports of entry.

However, the Immigration and Nationality Act “says very clearly that any person can apply for asylum whether or not at a designated port of arrival”, said Tom Jawetz, vice-president for immigration policy at the Center for American Progress, in a statement.

The Trump administration has a track record of proclaiming illegal immigration restrictions that are later thrown out in court, beginning with multiple travel bans the White House attempted to impose shortly after Trump’s inauguration. A narrow and temporary version of Trump’s travel ban was allowed to take effect.

“In its rush to obstruct asylum seekers, the administration is attempting an end run around the law,” said Beth Werlin, executive director of the American Immigration Council. “Congress has spoken clearly. Individuals are not required to ask for asylum at a port of entry. Any person in the United States must have access to the asylum process.”

Motivated by a sense of moral purpose and in accordance with international norms settled after the second world war, the United States accepts asylum applicants who fear persecution in their home countries due to race, religion, nationality, membership in a particular social group or political opinion.

Just under 40,000 applications for asylum in the United States were made by Mexicans and Central Americans in the five fiscal years from 2011 through 2016, while about 35,000 came from China, according to the Transactional Records Access Clearinghouse (Trac), a data-gathering organization at Syracuse University.

But if the new Trump regulations seemed ill-equipped to ease pressure on the “overwhelmed” US asylum system, they could serve the purpose of tying Trump’s political identity even more tightly to Americans’ concerns about immigrants from Central America and Mexico.

In the weeks leading up to the midterm elections, Trump raised alarm about an “invasion” of immigrants from the south and even deployed the US military to the border – in an operation that the administration and media wholly dropped after the elections.

“While the administration clearly felt an urgent need to politicize the plight of a group of people – mostly mothers and children – traveling slowly through Mexico in advance of Tuesday’s midterm elections, that hardly provides the urgency needed to justify putting this cruel policy in place without first hearing from the public,” Jawetz said.

“With the Trump administration, it’s useful to remember that as much as they embrace fear-mongering and anti-immigrant bias for their perceived political benefits, they are also committed to furthering an anti-immigrant and anti-refugee agenda every single day.”

The new Trump policy was signed by the homeland security secretary, Kirstjen Nielsen, the lead apologist for Trump’s policy of family separations at the border, and by the acting attorney general, Matthew Whitaker, whose appointment on Wednesday was deemed plainly illegal by John Yoo, who crafted the George W Bush administration’s legal argument for torture.

Kidnapped students in Cameroon reunited with their parents