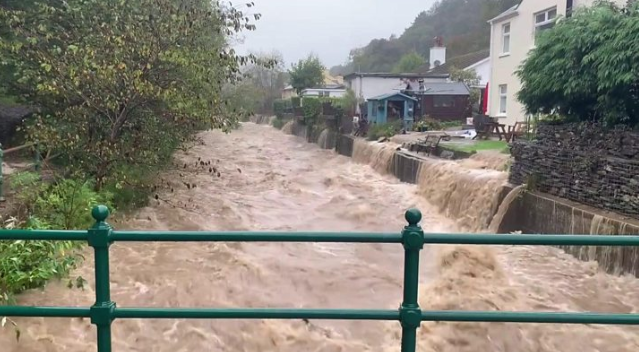 Torrential rains have swept across the UK bringing floods, closing roads and railways, and leading to some places being evacuated.

Dozens of flood warnings had been issued and some areas in the Midlands, Wales and southern England were hit by a week’s rain in just an hour.

On the Isle of Man, a major incident was declared as floodwaters trapped people in their homes.

Further heavy rain and high winds are expected on Thursday.

The Environment Agency issued dozens of flood warnings and alerts across England, while the Met Office issued a yellow warning for heavy rain that could cause power cuts, road closures and flooding.

The warning is in place until 20:00 BST across large parts of central and southern England, and Wales.

In Cornwall, floods caused by a coastal surge meant people were told to leave caravans and seaside properties in the morning and not to return until it is safe to do so.

There were also several flood warnings in Wales and one flood warning in Scotland, around Loch Ryan, which has since been lifted.

After bringing up to 50mm (2 ins) of rain in a couple of hours in some places, the downpours are expected to die down on Tuesday night.

By Tuesday afternoon, the highest hourly rainfall was 25.6mm, recorded at Pennerley in Shropshire. That part of the country normally receives just 96mm of rain in the whole of October.

But the localised nature of the downpours means the heaviest rainfall may not be recorded by a weather station, the Met Office said.

Worcestershire was one place that experienced torrential rainfall, with the fire and rescue service issuing a warning to drivers after a car was submerged in floods.

In the north of England, heavy rain overnight meant a number of roads were flooded in Cumbria and a landslide on the rail line between Carlisle and Newcastle disrupted train services.

Flooding on the Cumbria Coast line between Carlisle and Maryport saw cancellations on Northern services from Carlisle to Barrow and onwards.

However, fears of a coastal surge in Hunstanton, west Norfolk, proved unfounded.

Around 3,000 households were told to evacuate, but Environment Agency confirmed an all-clear had been given just before 10:00.

On the Isle of Man, the village of Laxey was cut off after its second major flood in four years.

The river that gave the village its name burst its banks, leaving people trapped in their homes. The fire service helped to evacuate several houses, while a coastguard helicopter was flown in on standby.

The village was previously flooded in 2015, when a 200-year-old stone bridge was washed away. One villager told the BBC that this year’s flooding was the worst he had seen.

Flooding also appeared to trap cars in the East Midlands, with two vehicles caught up in high waters at Colston Bassett, Nottinghamshire.

And on Monday night, fire crews reported a number of rescues from stuck cars near Burton-upon-Trent and near York.

Meanwhile, fire and rescue services across England attended a number of flooded homes to help pump out water.