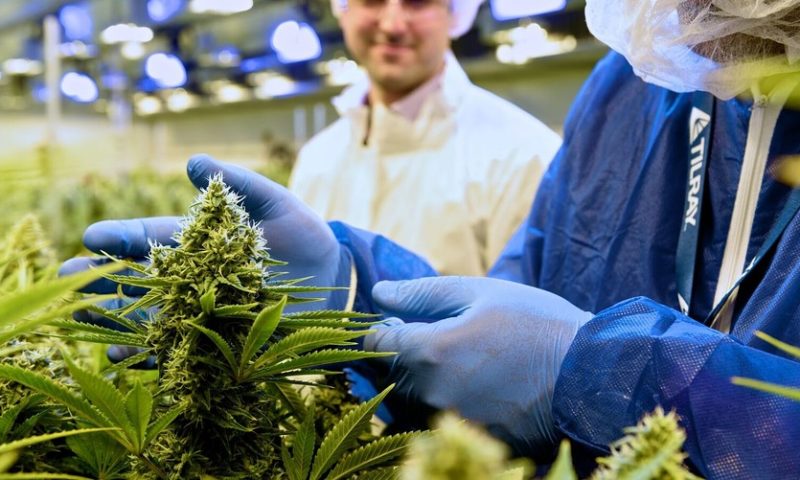 Tilray Inc. nearly doubled its revenue as losses mounted ahead of Canadian legalization of recreational cannabis, the pot producer revealed Tuesday in an earnings report.

Tilray TLRY, -1.67% shares dropped more than 5% in after-hours trading immediately after results were posted Tuesday afternoon, but headed back up quickly and were trading higher in the extended session minutes later — as of 5:33 p.m. Eastern time the stock was down $1.2%. That type of volatility is not unusual for the stock, which closed with a 1.7% loss at $111.15.

The Canada-based company reported net losses of $18.7 million for the third quarter, which amounts to 20 cents a share, widening from $1.8 million, or 2 cents a share, in the year-earlier period. Excluding items such as stock-based compensation, which resulted in an $11.2 million charge in the quarter, the company lost $7.5 million, or 8 cents a share.

Tilray’s sales and marketing expenses more than doubled compared with last year’s third quarter, and general and administrative expenses also more than doubled as the company ramped up for Canadian legalization. The four analysts polled by FactSet who cover Tilray expected a net loss of 12 cents a share on sales of $10.1 million.

Tilray revenue increased 86% to $10 million from the year before. Medical cannabis demand, as well as markets outside Canada and sales to other licensed producers within Canada, accounted for most of the revenue growth. The company doubled the amount of weed it sold to 1,613 kilograms, from 684 kilograms in the year-earlier period. Bulk sales to other licensed producers made up 50% of revenue, Chief Financial Officer Mark Castaneda said in the conference call Tuesday.

Average per-gram weed prices dropped to $6.21 from $7.53, which the company said was because it sold more pot in bulk than the prior year. The company said its production run rate is roughly 33 metric tons.

In the conference call, Chief Executive Brendan Kennedy said the company did not make any sales to the adult-use market in Canada within the third quarter. But executives said that the company’s October sales were “off to a good start” and that none of the Canadian weed companies can keep up with recreational demand. Other issues, such as the provincial wholesalers not having proper licensing, also contributed to the supply issues across the country.

To meet the widely anticipated supply shortages, Kennedy said Tilray considered buying from third parties but it wasn’t able to obtain product because the weed didn’t meet Tilray’s quality standards, and there was much less supply available because many licensed producers had been exaggerating their capacity and metric-ton production.

“We are in the early stages of achieving our growth potential and our team continues to strategically execute on disciplined operational initiatives and investments to support Tilray’s long-term, sustainable growth as the pace of legalization continues to accelerate around the world,” Kennedy said. “Going forward, the demand for our products is strong and we remain committed to expanding our leadership in the global medical and adult use cannabis markets.”

Tilray said that it added the Canadian province of Prince Edward Island to its roster of supply agreements, bringing the total to eight of the country’s 13 provinces and territories. The company’s High Park Farms received a license from Health Canada to sell weed during the quarter.

The company also raised an additional $435 million in net financing from a convertible bond issue and touted the expansion of its global medical business and clinical trials, such as one at the University of California San Diego Center for Medicinal Cannabis Research related to essential tremor.

In the conference call, Kennedy also pointed to several positive political developments in the U.S. that may pave the way for cannabis-friendly legislation under the next Congress.

In its conference call Monday, Aurora executives said it had sold Ontario, the country’s most populous province, 30% of its total supply. Overall it sold 2,676 kilograms of pot in the September quarter.

Why you should change your internet router password now