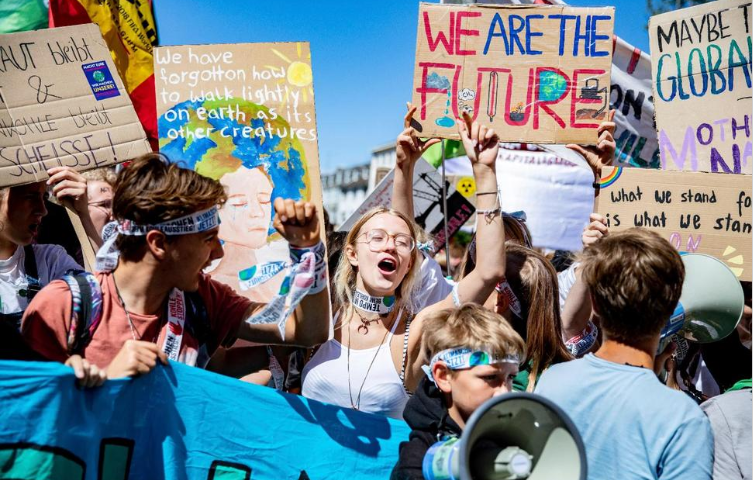 Thousands of students from across Europe gathered Friday near a coal mine in western Germany for a protest calling on governments to take bolder action against climate change.

AACHEN, Germany — Thousands of students from across Europe protested Friday near a coal mine in western Germany, urging governments to take bolder action against climate change.

Organizers said up to 20,000 protesters from 16 countries took part in the rally in Aachen, near Germany’s border with Belgium and the Netherlands. Demonstrators carried banners with slogans like “Your greed costs us our future” and “Stop coal.”

It comes a day after European Union leaders failed to agree upon a plan to make the bloc’s economy carbon neutral by 2050. Several large European countries — including Britain, France and Germany — have backed the target, but coal-reliant countries in the east, such as Poland, blocked consensus on the proposal, which entails an almost complete phase-out of fossil fuel use.

Friday’s protest took place near the site of one of Germany’s biggest lignite coal mines. The mine has become a focus of environmental protests in recent years because its operator, the utility company RWE, threatened to chop down a nearby forest.

Further protests are expected at the site over the weekend. German police have mobilized hundreds of officers and a water cannon to prevent the vast, open-cast mine and adjacent power plants from being blocked by protesters.

The German government earlier this year approved a national plan to end the use of coal for electricity by 2038 but make up much of the shortfall with imported natural gas.

Activists say German can — and should — do more.

“Germany, among other industrial nations, is one of the countries mainly responsible for climate change,” said protester Paula Maas, 21. “We do not feel the effects yet in comparison to the countries in the global south, and it is simply essential to take to the streets against it and to protest.”

Following months of protests by students and a sharp rise in the polls for Germany’s Green party, Chancellor Angela Merkel recently threw her weight behind the idea of making the entire German economy climate neutral by 2050 — meaning no more man-made greenhouse gases would be added to the atmosphere.

Scientists say ending fossil fuel use by mid-century is a must if countries want to achieve the 2015 Paris climate accord’s most ambitious goal of keeping global temperatures from rising more than 1.5 degrees Celsius (2.7 degrees Fahrenheit) compared to pre-industrial times.

Speaking Friday after the end of the EU leaders’ meeting in Brussels, Merkel noted that a “big majority” of the bloc’s 28 nations now back that goal.

“A few others need to spend a bit more time working out what this means for their internal measures,” she said, without calling out the countries by name.

But activists called the EU’s failure to agree on a unified position ahead of a U.N. climate summit in September “shameful.”

“The EU is in danger of being associated with climate pariah states like the U.S. and Brazil,” said Mohamed Adow, a climate policy expert at Christian Aid. “They must stop hiding behind a handful of blockers if they want to claim any leadership on the global stage.”