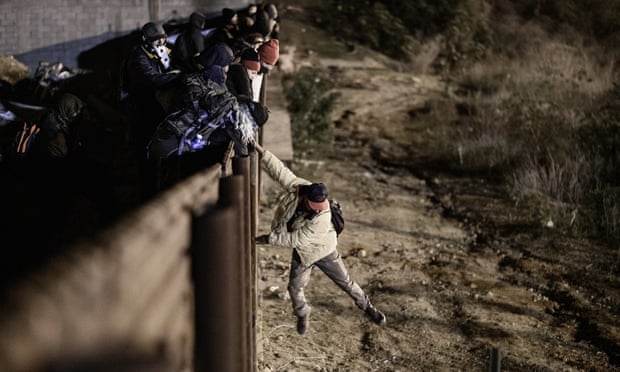 When she announced last month that tens of thousands of asylum seekers would be returned to Mexico while their cases are considered, the homeland security secretary, Kirstjen Nielsen, described the move as a “historic” overhaul of US immigration policy.

But more than two weeks later, the new strategy has yet to begin and it remains unclear how the plan would work – or even if Mexico is willing to enforce it.

The measure would be the Trump administration’s most significant move so far to dissuade people from seeking asylum. It would relieve pressure on US immigration authorities – and transfer it to Mexico.

But Mexican officials who would in theory implement the policy say they have been kept in the dark over the change – and some have explicitly opposed it.

“I had heard rumors, but I was not consulted,” said Tonatiuh Guillén, head of Mexico’s national immigration authority, told the Guardian.

“The US can’t just dump people into Mexico – they have to knock. We’ve asked for more answers, but the US government is shut down, so I guess they’ll answer when they figure that out. It’s all up in the air,” he said.

The number of people – mostly Central Americans – who would be parked in Mexico as a result of the move could be enormous.

In 2018, 93,000 people were given credible fear interviews – the first step in the asylum process. While overall immigration levels are at historic lows, the number of families and children crossing is at an all-time high. And a backlog of nearly 1m cases in the US means asylum seekers could remain in Mexico for years.

“It’s not some small detail. The numbers just aren’t manageable. It will have far-reaching effects on services, employment, everything – the social and political fabric of Tijuana and other border cities,” said Guillén

Confusion over the current state of the plan reigns on both sides of the border: when Nielsen announced the move on 20 December, Mexico’s foreign ministry reluctantly accepted, although within days the foreign minister, Marcelo Ebrard, said he would need more information from US authorities. Guillén said Mexico had not formally accepted the plan.

Meanwhile, US Congress members wrote to the secretary of state, Mike Pompeo, on 2 January requesting the text and details of any agreement.

Hopes for clarity have been further complicated by the shutdown of the US federal government triggered by a funding row over Donald Trump’s demands for a $5bn wall on the southern border.

US border officials are already limiting the number of people who can apply for asylum at a port of entry, creating delays of several months for migrants hoping to get into the US – and overwhelming public services in Mexican border cities.

Activists in Mexico say the “catch and return” policy would push conditions past breaking point.

“Aside from this taking away people’s right to apply for asylum, it would cause Mexico’s northern border cities to nearly collapse,” said Esmeralda Siu Márquez, the executive coordinator of Coalición Pro Defensa Del Migrante, a network of local migrant support organizations.

“This would change Tijuana from being a transit point. Shelters, which are already at capacity, are temporary – we’d need housing, integration programs, school programs, etc. We don’t have the budget.”

Officials in Tijuana have already stretched thin resources, normally focused on Mexican deportees, to deal with the more than 5,000 members of the Central American migrant caravans which started arriving in November.

Cesar Palencia, who handles migrant affairs in Tijuana, says he only heard of the plan on the news. “The city isn’t prepared for this. The [Mexican] federal government does not really understand what this would mean – they have no strategy, no budget for it,” he said.

Mexico’s new president, Andrés Manuel López Obrador, cut the country’s migration and refugee budget after he took office 1 December 2018, and has not indicated whether or not that would change in light of the new plan. His administration has also pledged visas and work in Mexico for Central American migrants.

But for many, like Samuel Tabora, a 24-year-old construction worker, the kind of jobs available in Mexico – particularly low-skill factory positions in Tijuana – do not pay enough for them to send much back home to Honduras, where over two-thirds of the country lives in poverty.

Faced with the prospect of staying years in Mexico, he said he would consider jumping the border fence with his partner and four-year-old daughter. “If they deport me, we’ll just turn around and come back. I want to work and make money and to have something to send home to my family,” he said.

Since Nielsen’s announcement, US agents have twice fired teargas into Mexico to prevent some people, including families with young children, from attempting to breach the border fence.

Several of the asylum seekers who had heard of the potential policy said they would simply wait it out in Mexico. “Going back, I may as well just tie a noose for myself and hang it from a tree,” said Francisco M, who left Guatemala with his wife and three children due to extortion threats from gangs. “We are here alone and it hurt to leave our roots, but I’d have to have a death wish to go back there. No, we will stay as long as it takes.”

Meanwhile, human rights groups warn that Mexico, one of the most violent countries in the world, is not safe for asylum seeker. Last month two Honduran teenagers who had traveled with the caravan were murdered in Tijuana.

Advocates warn the plan would add formidable new challenges to the already-tortuous asylum process. “The policy essentially dispossesses people of their right to trial. It takes me months to prepare one asylum case. I’ll maybe meet with a person six times. People cannot build cases in the US if they can’t meet with their lawyers. How will they get to their hearings?” said Erika Pinheiro of Al Otro Lado, a legal aid organization in Tijuana.

It would also encourage migrants seeking asylum to take more treacherous routes, she said. “By taking away legal avenues to asylum, you’re basically telling people to jump over the fence.”