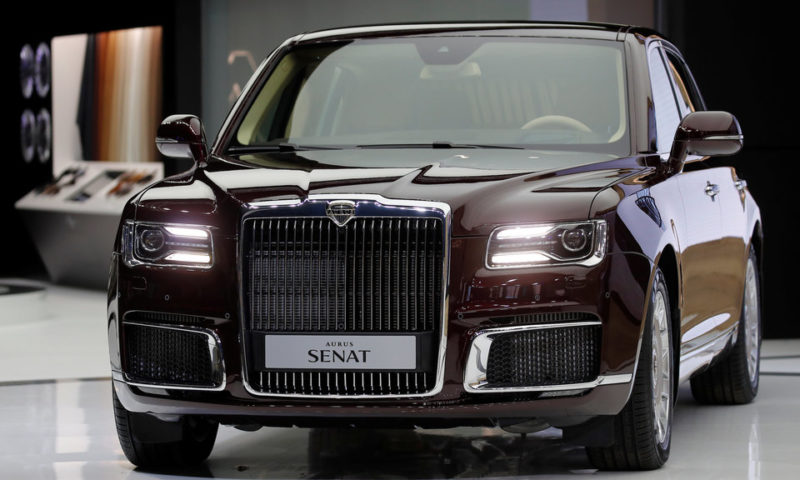 A new luxury sedan and limousine modeled after the state-vehicles used by Russian President Vladimir Putin were unveiled at the Moscow Auto Show yesterday, though the vehicles show striking similarities to other luxury cars.

Aurus Senat, is a new luxury line of armored sedans and limousines developed in conjunction with a Russia state-sponsored research institute agency known by the acronym NAMI, as well as the Russian carmaker Sollers. The car goes on sale in January 2019 and it is reported that while Aurus only expects to sell 150 vehicles its first year, the luxury line of cars will eventually be made available abroad with the goal of selling 10,000 per year.

The Aurus Senat is the new state vehicle used by Putin, as he rode in the armored limousine during a televised drive after his inauguration ceremony in May and to his July 16 meeting with President Donald Trump in Helsinki. Some speculate that Putin is displaying the Russia-made vehicle as an example of Russia’s ability to reduce its dependency on imported goods and technology.

The Aurus Senat uses a 4.4 litre hybrid-petrol V8 engine that produces 568 bph, can go from zero to 60 mph in six seconds, and features a nine-speed automatic transmission along with all-wheel drive.

Putin’s model is bulletproof and bombproof, can be fully submerged in water, and has tires reinforced with steel so they cannot go flat. While the civilian version of the Aurus Senat may not share these features, it is still going to be a vehicle aimed to be purchased by the wealthiest Russians and others.

The cars are built specifically to attract wealthy Russians away from brands like Rolls-Royce, Bentley, and Mercedes-Benz.

Chief designer Vadim Pereverzev told Agence France-Presse, Moscow that “there is demand for a high-tech quality product made in our country, in particular for a car of such a class. Consumers of such cars, you could say they are tired of Rolls-Royces, Mercedes and Maybachs.”

At a Moscow Motor show on August 29, CEO of the Aurus brand, Franz Gerhard Hilgert, said during his presentation, “We will not sell this vehicle only in Russia, we will sell it abroad.”

Yet if the designers behind the Aurus Senat are seeking to separate themselves from their competition, it’s worth mentioning that the Aurus Senat bears a striking similarity to the Mercedes-Maybach S600 Pullman Guard as well as to the Chrysler 300, and Rolls-Royce Phantom.

This tiny South American country is about to burst with oil

In tight-lipped Switzerland, young people are publicly sharing their salaries