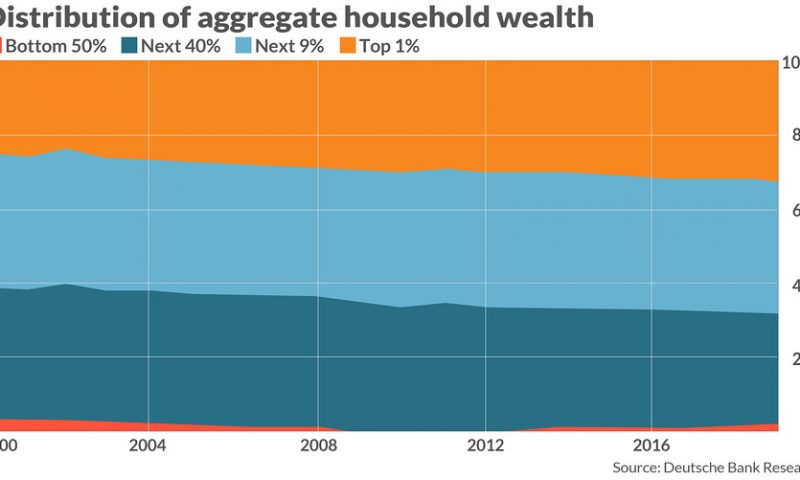 The rich are getting richer. It is a refrain that has certainly been uttered before, and likely will again, as Deutsche Bank Securities’ chief economist points out that the gap between the haves and have-nots in the U.S. is, indeed, widening.

Deutsche Bank’s Torsten Sløk says that the distribution of household wealth in America has become even more disproportionate over the past decade, with the richest 10% of U.S. households representing 70% of all U.S. wealth in 2018, compared with 60% in 1989, according to a recent study by researchers at the Federal Reserve.

The study finds that the share of wealth among the richest 1% increased to 32% from 23% over the same period.

To make a finer point, Fed researchers say the increase in wealth among the top 10% is largely a result of that cohort obtaining a larger concentration of assets: “The share of assets held by the top 10% of the wealth distribution rose from 55% to 64% since 1989, with asset shares increasing the most for the top 1% of households. These increases were mirrored by decreases for households in the 50-90th percentiles of the wealth distribution,” Fed researchers said.

Sløk said the financial crisis has played a significant part in this growing gap, which resulted in the Federal Reserve stepping in to stem a massive ripple of losses through the global financial system as the housing market imploded.

As a result, the Fed lowered interest rates, which had the knock-on effect of pushing easy money into the hands of the already-wealthy.

“The response to the financial crisis was for the Fed to lower interest rates which in turn pushed home prices and stock prices steadily higher over the past decade,” Slok said.

“And another consequences of the financial crisis was a decline in homeownership and stock ownership among households,” he said. Homeownership usually represents the largest share of household wealth and that was hurt in during the 2008-09 recession.

The national homeownership rate for the first quarter of 2019 was 64.2%, according to the U.S. Census Bureau. That is below the historic average of 65.2%, which dates back to the 1960s.

Here’s a graphic from the Census Bureau showing the homeownership average since 1998:

“So in some sense the source of higher inequality is Fed policies, which pushed stock prices and home prices higher. But the lack of changes in redistribution by fiscal policy is also playing a role,” Sløk said.

Stocks have enjoyed a massive increase since their crisis lows.

But homeownership hasn’t moved in step with that stock advance, and many individuals didn’t participate in the stock market’s rally after the crisis, Sløk speculates.

“In sum, this meant that stock prices and home prices have increased but ownership has shrunk to fewer hands and as a result we now have more inequality than ever before,” he explained.

Inequality has partly given rise to Democratic-Socialist Congresswoman Alexandria Ocasio-Cortez, who has proposed leveling massive taxes on the superrich. Her mention in early January of a radical 70% tax on the wealthy has proven divisive in Washington.

The wealth divide has also intensified the debate about the merits of capitalism: the beating heart of the U.S.’s financial system.

Billionaire Ray Dalio said capitalism is no longer working for most Americans, adding that the expanding wealth gap is creating a volatile environment with disturbing parallels to the economic and social upheaval of the 1930s, he said in a blog on LinkedIn last month.

It’s unclear, what the next 10 years will look like, but some have argued that a combination of monetary policy and fiscal policy may be necessary to span the yawning divide.

Can Sir Philip Green save his retail empire?