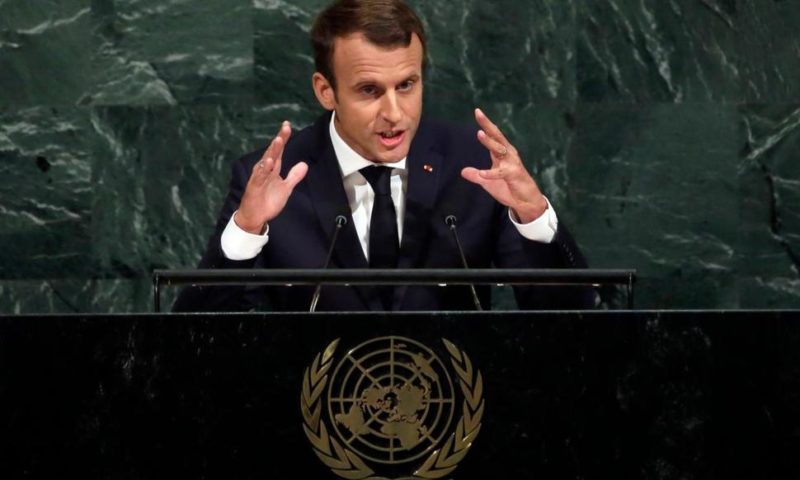 France’s government spokesman says that the country is seeking a solution with other EU members after humanitarian groups operating a rescue ship with 58 migrants aboard want to be allowed to disembark in the French southern port of Marseille.

ROME — THE LATEST on Europe’s migrant crisis (all times local):

France’s government spokesman says that the country is seeking a solution with other EU members after humanitarian groups operating a rescue ship with 58 migrants aboard want to be allowed to disembark in the French southern port of Marseille.

Benjamin Griveaux tweeted that the solution will come from “cooperation with our European partners.”

He said that “humanity is to make the ship land in the closest and safest port.”

The French government has repeatedly said that under international law, rescue ships saving people at sea must dock at the closest port.

The Aquarius 2, operated by SOS Mediterranee and Doctors Without Borders, is the last private rescue ship operating in the waters off Libya.

Panama’s maritime authority said it has begun procedures to remove the registration of Aquarius 2 after Italy complained that the boat’s captain failed to follow orders to return rescued migrants to Libya.

Croatian police are searching for a 5-year-old Syrian girl after her father posted an emotional appeal seeking help finding her.

Police say they formally opened an investigation after meeting the 43-year-old man Monday at the Bosnian border.

The case has triggered public attention in the European Union country after the man said he was separated from his daughter some ten days ago when police picked him up in a Croatian village and sent him back to Bosnia. His child stayed behind with other refugees.

Croatian police in the past have faced accusations of pushbacks and violence against migrants, which they have denied.

Police in Slovenia say they have caught more than 100 migrants trying to illegally enter the European Union country last weekend.

Police said that the migrants were trying to cross into Slovenia from Croatia both in the west and the southeast of the country.

The migrants came from various countries in the Middle East, Asia and Africa. Police said that 26 of them have been sent back to Croatia so far, while several dozen have sought asylum in Slovenia.

Migrants come to Slovenia as they try to reach Western Europe through the Balkans. Hundreds of thousands passed through the country in 2015.

The humanitarian groups operating the sole private rescue boat operating near the deadly central Mediterranean human trafficking route are urging European countries to intervene in order to secure its future after Panama moved to cancel the ship’s registration.

Medecins Sans Frontieres and SOS Mediterranee described the decision by the Panama Maritime Authority to de-flag the vessel as shameful.

Francis Vallat, the head of SOS Mediterranee France, asked European countries on Monday during a news conference to “find a solution, whatever it is. We can’t stop. We don’t want to stop. We will only yield to force and constraint.”

Panama’s maritime authority said over the weekend it has begun procedures to remove the registration of Aquarius 2 after Italy complained that the boat’s captain failed to follow orders.

Italy’s populist government is making it harder for migrants to be approved for humanitarian protection.

Interior Minister Matteo Salvini told reporters that the government at a Cabinet meeting Monday approved a decree setting tighter criteria for such protection, which accords a status less than full asylum.

Humanitarian protection will only be granted for victims of labor exploitation, human trafficking, domestic violence, natural calamities or those needing medical care as well as to those who performed “deeds of particular civic value,” an apparent reference to heroism.

He said asylum-request evaluations will be suspended for those deemed “socially dangerous” or convicted of crime, even before court appeals run out. Salvini insisted: “We’re not harming any fundamental rights.”

The Open Society Foundations, created by billionaire philanthropist George Soros, says it has filed applications before the European Court of Human Rights and Hungary’s Constitutional Court about recent laws in Hungary targeting civic groups working with refugees and asylum-seekers.

James Goldston, director of the Open Society Justice Initiative, the foundations’ legal team, told The Associated Press on Monday that the legal action is aimed at countering laws “meant to intimidate and silence independent voices in Hungary.”

Legislation dubbed “Stop Soros” passed in June threatens to incarcerate for up to one year people helping asylum-seekers, while in July Hungarian lawmakers approved a 25 percent tax on financial or material support for groups promoting migration.