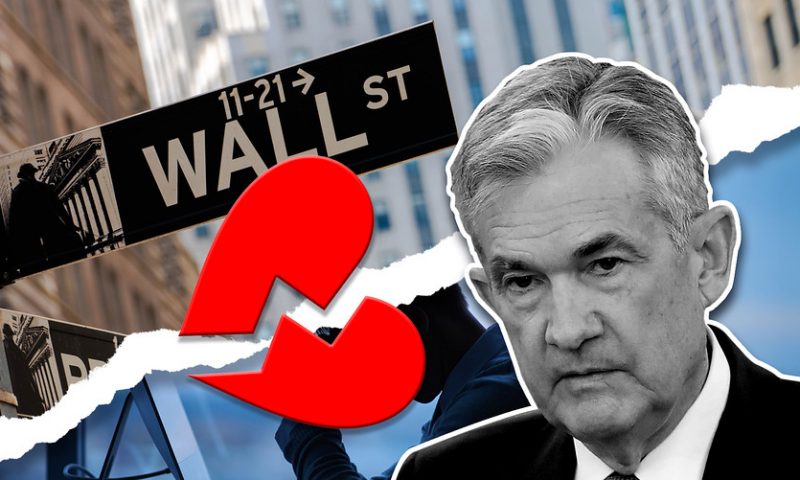 All eyes on Fed Chairman Jerome Powell on Wednesday

The first cut is the deepest.

Clamoring for a rate cut—the first in more than a decade—by the Federal Reserve at some point this year is running hot.

A survey by the Wall Street Journal earlier in the week signaled that nearly 40% of economists (paywall) polled by the publication expect the U.S. central bank to ease monetary policy next month.

The chief economist Joe Davis of Vanguard, the fund provider that manages some $5.4 trillion of wealth, speculated that an “insurance” rate cut by Jerome Powell’s Fed could arrive as early as Wednesday, at the conclusion of the central bank’s two-day policy gathering that kicks off June 18. Federal-funds futures pointed to an 87% chance for a July cut and 26% chance for an easing this month, as of late Friday, CME Group data show.

But what if Wall Street is stone-cold wrong about the Fed cutting, or even communicating its intent to reduce benchmarks rates, which currently stand a range between 2.25%-2.50%, in coming meetings?

“The Fed might not be prepared to confirm such validations given the hard data do not yet signal a sharp slowdown in economic activity,” she said.

May’s woeful employment report from the Labor Department, with just 75,000 jobs created on the month, compared with expectations for 185,000, is often cited as evidence of cracks forming in the economy, which is set to mark at the end of this month a record for the length.

However, other data have been relatively healthy if failing to dazzle. A measure of retail sales activity indicated that persistent talk of the demise of the U.S. consumer is overstated. U.S. retail sales gauged by the Commerce Department increased 0.5% in May, slightly below expectations of 0.7%, while the reading for April sales was raised to a 0.3% gain from the initial report of a 0.2% fall.

The University of Michigan’s consumer-sentiment index came in at 97.9 in early June, down from a seasonally adjusted 100 in May but slightly higher than estimates for 97.3, and a measure of industrial production rose 0.4% in May, representing its strongest monthly rise in six months, helped by increased production of pickup trucks and cars.

Those reports don’t immediately scream out for a pre-emptive rate cut, some strategists argue.

However, the data do pose a conundrum for the Fed, which must weigh lowering rates—off already low levels—to curtail the effect of a protracted Sino-American trade conflict even as data remain relatively stable—at least for now. To be sure, the corporate chieftains say trade-war worries are forcing them to rethink their business strategies.

That all sets the stage for a possible disappointment for a market that is pining for rate cuts, betting that the trade friction between the U.S. and China could yield a more dovish, or accommodative, posture from U.S. monetary policy makers, with the 10-year Treasury note TMUBMUSD10Y, +0.00% closing at a paltry 2.093% on Friday, while the S&P 500 SPX, -0.16% is off a mere 2% from its April 30 record and the Dow Jones Industrial Average DJIA, -0.07% is about 2.8% shy of its Oct. 3 all-time high, while the Nasdaq Composite indexes COMP, -0.52% was about 4.5% off its 52-week high. That is notable because the Nasdaq slipped into correction territory, commonly defined as a 10% drop from a recent peak, about two weeks ago.

The fact that assets perceived as risky like stocks, and bond prices, which move inversely to their yields, are climbing in tandem (and gold GCQ19, +0.06%  is flirting with 14-month high), underscores the unusual and confusing state of affairs for investors.

On top of that, inflation is stubbornly low, the Univ. of Mich. survey showed that consumers expect annual inflation to average 2.2% over the next five years, down from expectations in May of a 2.6%.

However, the Fed’s preferred measures of inflation, personal-consumption expenditures, or PCE, rose 1.5% in April from a year earlier and has been consistently running below the Powell & Co.’s 2% annual inflation target, with the Wall Street Journal reporting that weak inflation data are part of the mix of factors that may ultimately compel a Fed rate cut.

Thomas di Galoma, managing director and head of Treasury trading at Seaport Global Holdings, told MarketWatch that bonds and stocks, which have both been rallying on rate-cut expectations could tumble.

“I think there could be a real disappointment with the Fed’s message as 10-year rates have fallen 45 [basis points] in the last 30 days the market could set itself up for a yield selloff,” he said.

Either way, Kristina Hooper, chief global market strategist at Invesco, said the June Fed meeting will be a crucial point for setting the tone for the markets.

“All eyes will be on this Fed meeting—especially the statement and the dot plot,” she said, referring to the plot of rate expectations by the members of the Federal Open Market Committee.

“In other words, this Fed meeting is very important because market expectations have gotten so dovish recently,” Hooper said. “And with risks rising, many investors recognize that once again the Fed stands between it and a more trying stock market environment.”

She said the Fed will “definitely want to see some movement toward more dovishness,” adding, “I think markets are expecting to at least see the removal of the ‘patient’ language from the Fed statement.”

The Invesco strategist said if the market doesn’t get what it wants—watch out!

“If they don’t see a strong willingness to move toward more accommodation, they will likely register their disappointment in a stock selloff.”

Di Galoma put it this way: “Bottom-line is the Fed has to walk a tight-rope on their market message and achieve some stability. Lets just say they have a very difficult job at this point.”

Beyond the Fed decision due at 2 p.m. Eastern Time Wednesday and Powell’s news conference a half-hour later, investors are looking out for a few other data points, including the debut of enterprise software company Slack Technologies.

A reading of manufacturing conditions in the New York state area, the Empire State manufacturing survey, will be released 8:30 a.m., following by the Housing market index at 10 a.m.

A report on housing starts for May will be released on Tuesday.

Jobless claims and the Philadelphia Fed Business Outlook at 8:30 a.m.

A reading of existing-home sales will be released at 10 a.m.

A pair of central bank speakers, Federal Reserve President Loretta Mester and Fed Gov. Lael Brainard, will deliver remarks during a discussion of community development and the economy. Cleveland at 12 p.m. in Ohio.

Business conditions are at their worst level since the 2008 financial crisis, says Morgan Stanley