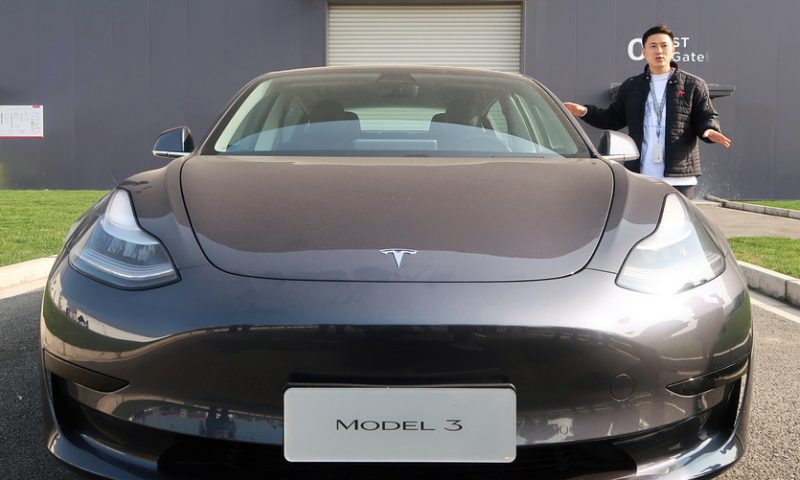 Cowen’s Jeffrey Osborne lifts price target, but still values the stock at about half current levels

Shares of Tesla Inc. took a dive Monday, to extend their pullback from last week’s record close, after Cowen analyst Jeffrey Osborne said he expects 2019 vehicle deliveries to come in below the low end of the electric vehicle maker’s guidance range.

Osborne raised his fourth-quarter vehicle delivery estimate to 101,000 from 95,000, citing strength in China and the Netherlands, ahead of reduced subsidies next year. Despite the increase, he expects the 2019 delivery total to be about 356,000 vehicles, “slightly missing” projections of 360,000 to 400,000 vehicles.

He said subsidy changes continue to be the biggest driver of market adoption of Tesla’s products.

“Despite commentary earlier this year suggesting a smoothing of deliveries through the quarter, Tesla appears to continue to stress its logistics for end of quarter surges,” Osborne wrote in a note to clients.

Osborne now expects 15,000 Model S and Model X deliveries during the fourth quarter, which is below management-provided estimate of 20,000, while his Model 3 delivery estimate of 85,300 vehicles is roughly in line with expectations of 85,500.

Excluding deliveries in China and the Netherlands, Osborne said he expects fourth-quarter Model 3 deliveries to be down 9% from the third quarter, and down 7% from a year ago. He said the decline “highlights the demand saturation we are seeing across most mature markets as we shift from pent-up demand to steady flow demand.”

Osborne’s call comes as Tesla made its first deliveries of cars built at its Gigafactory 3 plant in China on Monday. Read more about the first cars made at China gigafactory.

Osborne kept his rating at underperform, which he’s had on Tesla since at least August 2017, while bumping up his stock price target to $210 from $190. Despite the increase, that new target was 49.4% below Monday’s closing price.

The stock fell for a second day, after snapping a six-day win streak that was capped by the Dec. 26 record close of $430.94.

“We continue to see risks to the company’s growth story, which we believe is likely to be challenged as competition enters the market and the Model 3 sales steady run rate is realized,” Osborne wrote. “Simply, we see a lot more than can go wrong than can go right,” as Chief Executive Elon Musk’s master plan plays out.