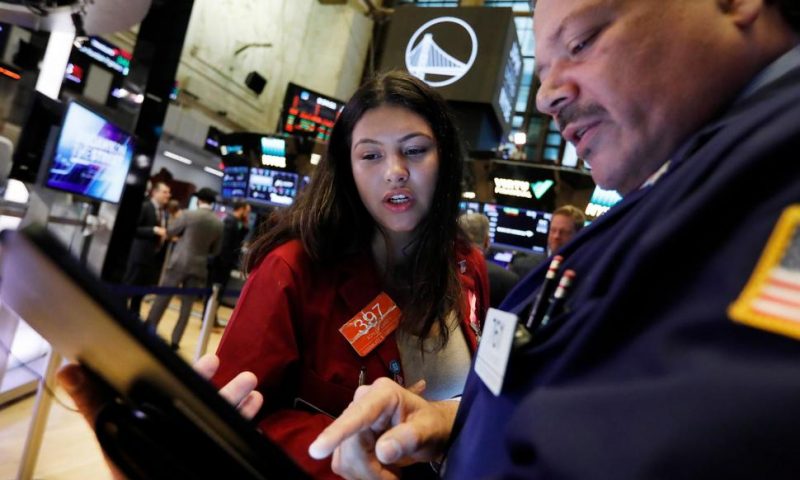 A day of mostly listless trading on Wall Street ended Wednesday with modest losses as the stock market gave back some of its gains from the day before.

A day of mostly listless trading on Wall Street ended Wednesday with modest losses as the stock market gave back some of its gains from the day before.

Technology stocks accounted for most of the selling, which lost some of its momentum toward the end of the day. Energy companies also fell. Financial sector stocks declined as bond yields, which are used to set interest rates on loans, headed lower.

The modest losses came as investors weighed mixed data on the economy and the latest batch of corporate earnings reports.

A move on Tuesday by the House of Representatives to show support for the pro-democracy protests in Hong Kong appeared to dim some investor optimism about the prospects for progress in the latest trade talks between the U.S. and China.

“We’re in the height of earnings season and the results that we got last night, as well as this morning, I would characterize as better-than-feared,” said Cayman Wills, global head of equities at J.P. Morgan Private Bank. “On the other side of the pendulum, you have this development on U.S.-China trade relations and the pro-democracy position that Congress took skews slightly negative.”

Stocks got off to a downbeat start Wednesday as investors sized up a mixed batch of economic data and company earnings reports.

The Commerce Department said U.S. retail sales fell in September by the largest amount in seven months. That stoked worries that consumers are pulling back on spending.

A slowdown in retail sales is concerning because consumer spending is a key growth driver for the U.S. economy, which has slowed this year as the costly trade war between the U.S. and China has escalated.

On Friday, the U.S. agreed to suspend a planned hike in tariffs on $250 billion of Chinese goods that had been set to kick in Tuesday. Beijing, meanwhile, agreed to buy $40 billion to $50 billion in U.S. farm products.

While both sides still have many issues to work out, the conciliatory steps announced on Friday suggested the trade talks were making some progress. The three bills passed in the House on Tuesday in support of the pro-democracy protests in Hong Kong gave investors a new reason to be less optimistic.

Investors are worried the action by the House could blunt the recent positive momentum in the trade negotiation, Wills said. “It might take it a step back.”

Stocks are on track to notch gains this week, in part because investors have mostly set aside concerns over the trade negotiations in favor of focusing on corporate earnings for the third quarter. Stocks rallied on Tuesday following surprisingly good earnings and hopeful forecasts.

Even so, company earnings for the third quarter are expected to be down by nearly 5%, according to FactSet.

Traders bid up shares in United Airlines 2.1% and Bank of America 1.5% Wednesday after the companies turned in third-quarter results that topped Wall Street’s forecasts.

Microsoft and Adobe were among the big decliners in the technology sector. Microsoft slid 0.8% and Adobe slid 2.4%.

General Motors rose 1.1% after the auto company and the United Auto Workers reached a tentative deal.