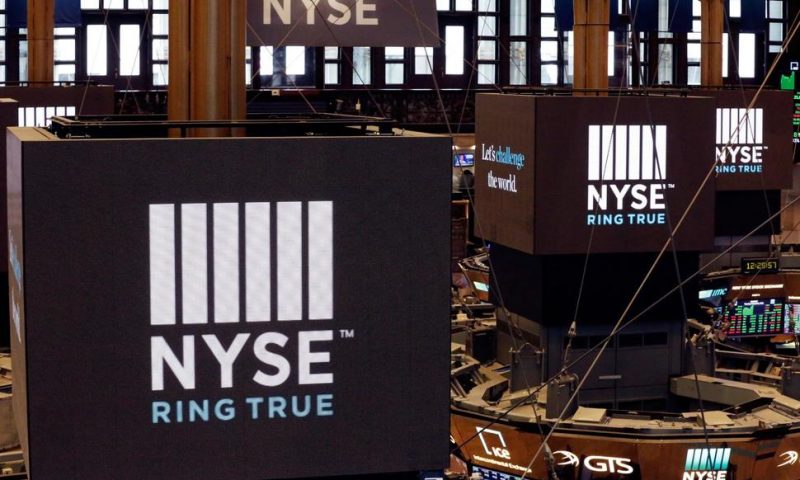 About one-third of that company’s suppliers are American chipmakers and the move would crimp sales for companies including Qualcomm and Broadcom. Both companies posted gains Tuesday, along with other chipmakers.

The U.S. government’s decision to issue a 90-day grace period on technology sales to Huawei, ZTE and other Chinese companies also relieved worries on Wall Street about yet another escalation in the trade war between the U.S. and China.

“I’m a bit surprised that the bounce back has been as strong as it has been,” said Randy Frederick, vice president of trading & derivatives at Charles Schwab. “It speaks to the fact that we’re still in a bull market and, in general, the economics are still pretty solid, and the markets are happy to move up on any sort of positive news, especially if it looks constructive toward trade.”

Major stock indexes in Europe rose. Bond prices fell, boosting the yield on the 10-year Treasury to 2.43% from 2.41% late Monday.

Heightened tensions over trade have stuck the market in a rut for the last two weeks — the S&P 500 is down 2.8% for May, although the benchmark index still shows a gain of 14.3% for the year.

The trend is a change from the relative calm that dominated markets earlier this year, when a trade agreement seemed to be in the works. The S&P 500 has twice dropped by at least 1.5% this month, as many times as it had in the first four months of the year.

“The trade negotiation with China is pretty much the big elephant in the room and continues to be,” Frederick said. “Which is why we’re going to continue to see above average volatility like we’ve seen for the last two weeks, and it’s a kind of treacherous spot for people to be in right now.”

The dispute between Washington and Beijing grew more heated the last two weeks after the Trump administration made good on a threat to raise tariffs on Chinese-made products and China retaliated with tariffs of its own.

The U.S. government’s restrictions on technology sales to Huawei added more anxiety for traders already worried about further escalations in the trade dispute.

But the temporary delay on the restriction of sales to Huawei announced Tuesday, as well as the government saying that the 90-day grace period could be renewed, appeared to alleviate some of those concerns.

The rally particularly benefited chipmakers, which had slumped on Monday.

Technology stocks, especially chipmakers, have already been under increased pressure because of the ongoing trade war. The latest move to restrict some technology sales could cut into key revenue sources.

Gains in consumer-oriented stocks were held back by disappointing quarterly financial results from a couple of big department store chains.

J.C. Penney slid 7% after it reported declining sales and a surprisingly wide loss. The retailer attributed part of the weak quarter to its no longer selling major appliances and furniture.

Kohl’s plunged 12.3% after its results fell short of forecasts amid slumping sales. The company also cut its profit forecast for the year.

The latest corporate results nearly cap an earnings season that has been better than the severe earnings recession that Wall Street initially feared.

US Home Sales Fell 0.4% in April Amid Limited Supply