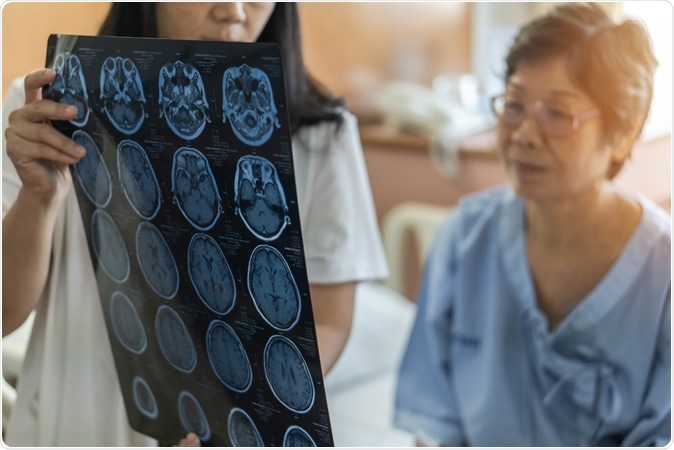 A new study published in the journal JAMA Neurology in March 2020 suggests that stress-related disorders increase the risk of later development of dementia and other neurodegenerative disorders.

While dementia, which is the most common neurodegenerative disorder, is known to be a sequel to post-traumatic stress disorder (PTSD), not much is known about how other stress-related conditions are linked to neurodegeneration.

Chronic stress is known to induce a poorly regulated stress response, which in turn can trigger the onset of brain degenerative diseases, such as Alzheimer’s disease (AD). Epidemiological evidence shows that the risk of such dementia conditions, but not conditions like amyotrophic lateral sclerosis (ALS) is increased with exposure to stress over the long term, whether it is from daily life, work, trauma or other impactful events in life.

A stress-related disorder is diagnosed by the symptoms as well as the presence of one or more stresses which cause the disorder. Both the life event and the mental upheaval it causes may cause an adjustment disorder. However, the threat of trauma may result in either an immediate acute stress reaction or the chronic one called PTSD. While common, these result in serious health effects over the long term, mostly in the form of heart disease and stroke. Earlier studies have shown the link between PTSD and dementia. PTSD and adjustment disorder is also known to increase the risk of Parkinson’s disease.

The current study was motivated by the desire to know how other neurological conditions were related to stress. Moreover, many earlier studies were based on limited samples, which may not have been generalizable. The present study was, therefore, based on the general population as well as sibling cohorts. A second aim was to detect associations between primary neurodegenerative diseases and those which were caused by vascular disorders because stress-related disorders are related to cardiovascular disease.

The researchers carried out a cohort study on two groups of people from the general population who were matched by birth year, sex, and county of birth. The aim was to compare the risk of neurodegenerative disorders between the two groups.

To adjust for confounding factors, they also performed a sibling cohort study to eliminate the role of genetic and nongenetic familial factors that might account for the stress-related disorder.

The Swedish National Patient Register (NPR) was used to first select a group of Swedes with a diagnosis of stress-related disorder made during the study period. The NPR covers over 80% of outpatients as well as all inpatients. This group was then screened for confounding factors such as a history of neurodegenerative disease, or inadequate information quality, or whose familial links were missing, as well as those who would be below 40 during the follow-up period. This was because the incidence of neurodegenerative disease is low among the under-40s.

The matching cohort was also selected at random from the Swedish Total Population Register, from people who had neither stress-related nor neurological disorder.

Finally, pairs of siblings, one of whom had and the other did not have a stress-related disorder, were studied using the NPR. There were almost 93,000 siblings of the about 48,000 individuals with a stress-related disorder, who themselves had neither this nor any neurodegenerative disorder at the date of diagnosis of their sibling with the disorder.

The follow-up was performed from the date of diagnosis of the stress-related disorder, for affected individuals, their siblings, and their matched controls. It began from the age of 40 or 5 years after the diagnosis was made, whichever came later. It ended with death, neurodegenerative disease diagnosis, emigration, or the end of the follow-up period in December 2013.

The researchers had almost 62 000 individuals with stress-related disorder and about 595,000 people without this exposure. In the sibling cohort, there were about 45, 000 exposed and 78,000 unexposed siblings.

People with stress-related disorders were more likely to have a history of other psychiatric illnesses, were poorer, of lower social class and educational level, and more likely to be divorced or widowed.

Among the specific dementias, only AD showed a significant association with stress-related disorder. The neurodegenerative disease began to manifest 5 or more years after the stress-related disorder was diagnosed. No significant difference was seen with sex, a history of psychiatric illness, a family history of neurodegenerative disease, or the duration since follow up.

People who suffered a stress-related disorder earlier in life showed a higher risk of developing neurodegenerative disease, with almost 2.5 times the risk of unexposed individuals below 35 years of age, 1.7 at 36-51 years, and 1.45 above 52 years.

The same patterns were repeated for both vascular and primary neurodegenerative disease. It was also observed with the sibling cohort. This robust association remained despite adjusting for confounding factors. The weaker relationship between PD or ALS and stress-related disorder may be because these cohorts were younger, at which ages the former conditions are relatively rare.

The increased association with vascular neurodegenerative disease may suggest a vascular component following stress. The mechanism could involve the hypothalamo-pituitary-adrenal axis, which in turn leads to changes in stress hormone levels. This could activate microglia and astrocytes, leading to oxidative stress and neuroinflammation over the long term. The outcome is neurodegenerative disease.

On the other hand, cerebral blood vessel abnormalities may also be affected, perhaps in the same way, by psychological stress. This could also be part of the cardiovascular disease that so frequently complicates stress-related disorders. This may explain why adjusting for cardiovascular disease reduces the strength of the relationship between vascular neurodegeneration and stress-related disorders.

The simultaneous occurrence of AD with vascular dementia could make it difficult to distinguish these conditions. In contrast, vascular factors could drive the disease process and the course of the illness in AD as well. Vascular impairment may thus be partly responsible for primary neurodegenerative diseases as well. Stress-related disorders may introduce or worsen lifestyle changes like smoking, alcohol use, substance abuse, or sleep disorders.

Though the study has limitations such as the potential for reverse causation and surveillance bias, the 5-year time lag to follow-up minimizes these concerns. The authors conclude, “The findings of this cohort study appear to support the hypothesis that individuals with a stress-related disorder diagnosis are at an increased risk of developing a neurodegenerative disease later in life.”

Neuronetics CEO Thatcher to step down