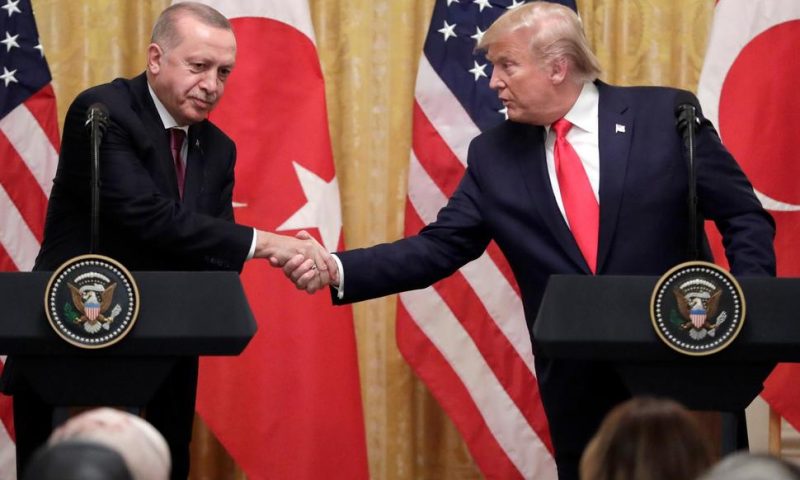 Each facing investigations, Erdogan and Trump attempted to portray relations between the two countries as positive, yet flawed, despite a growing chasm in common ground.

A PRESS CONFERENCE featuring perplexing statements by Turkish President Recep Tayyip Erdogan and President Donald Trump on Wednesday capped off a day of meetings between two leaders forced to awkwardly reconcile in public what has become an intensely strained relationship.

Facing international investigations for what the U.N. believes may have amounted to war crimes, Erdogan accepted Trump’s invitation to visit the White House weeks after ignoring the American leader’s pleas not to conduct his sudden invasion of northern Syria. Turkey and its local proxies have since faced broad international backlash for accusations of heavy-handedness, including their potential illegal use of white phosphorus as a weapon and their targeting Kurdish populations indiscriminately as terrorists in the war-torn region.

Speaking in the East Room of the White House, Erdogan repeated his claims that Kurdish fighting units known as the YPG – which the Pentagon has in recent years touted as a critical ally in the fight against the Islamic State group – are nothing more than terrorists. And he criticized the House of Representatives for approving legislation sanctioning Turkey for its aggressive actions.

“Some circles sympathetic to these terrorist organizations are feeling very upset, they are very disturbed,” Erdogan said through a translator in a thinly veiled reference to Congress, adding that the vote by U.S. lawmakers could “cloud” public perception about his forces’ operations.

The U.N. warned Turkey last week that it could be accused of war crimes as a result of actions by troops it commands, including acts of violence captured on gruesome cellphone footage that fighters have posted online.

Both leaders have faced intense political pressure in recent days and weeks. The press conference started roughly an hour after the completion of the first day of public impeachment hearings in Congress, the substance of which Trump continued to decry as a “witch hunt” and “hoax.”

On Wednesday, the two leaders – who reportedly enjoy a personal affinity for one another – attempted to project a friendly relationship between their countries that is set to improve, despite recent events that suggests the chasm between the two powers is only growing.

Among the most demonstrable examples of the increased tension between the two countries is Turkey’s decision to purchase advanced Russian surface-to-air missiles, despite repeated warnings from multiple U.S. government agencies and the White House that such a decision would threaten its standing as a NATO ally. Defense Department officials say the advanced F-35 fighter jet – soon to become the workhorse of NATO countries’ air forces – cannot operate within the same network as the Russian system due to security concerns.

Erdogan indicated Wednesday he is open to purchasing American-made Patriot missiles instead but did not say whether he would back down from the Russian deal.

“Under suitable circumstances we could acquire Patriot missiles as well,” Erdogan said.

The Pentagon announced in July it would cease plans to produce F-35 components in Turkey by 2020 if it proceeds with buying the S-400.

In his opening statement of the roughly 40-minute press conference, Trump lauded Turkey as a “great NATO ally” with which the U.S. has a strong relationship, including regarding recent operations in Syria.[

“We’re grateful for Erdogan and the citizens of Turkey for their cooperation in the recent struggle against terrorism. He fights like we do,” Trump said. He did not provide details about the specific cooperation but made the statement after mentioning that the U.S. had alerted Turkey about the commando raid it carried out to kill Islamic State group leader Abu Bakr al-Baghdadi late last month.

Erdogan was asked why he didn’t comply with a letter Trump sent shortly before Turkey launched its campaign into Syria asking Erdogan not to be a “tough guy” or a “fool.” The Turkish president, who previously claimed to have thrown out the letter, offered a rambling response and ultimately said he gave it back to Trump earlier in the day, without commenting on the letter’s contents itself.

California Crisis of Fires, Blackouts Decades in the Making

Two People in China Diagnosed With the Plague