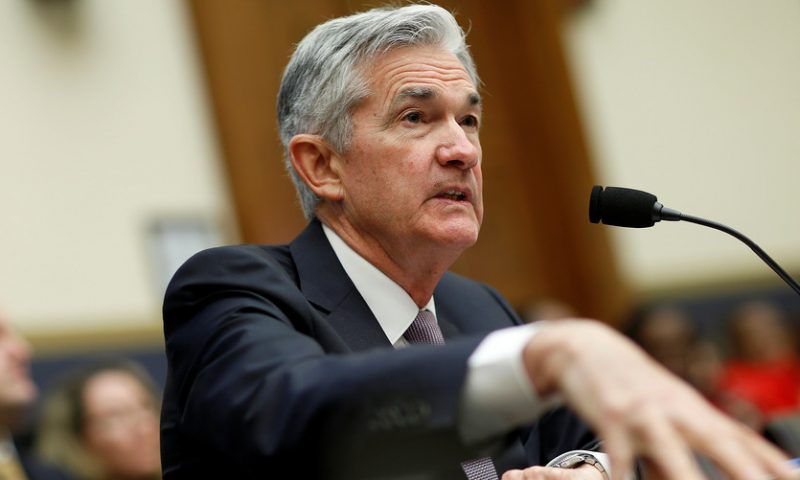 U.S. stocks were slightly lower Wednesday, taking a breather on renewed concerns about international trade policies and monetary policy, after a five week rally to benchmark indexes to record highs

How are major indexes trading?

Need to Know: Here’s the price to be paid for listening to ‘Armageddonist’ predictions from the likes of Soros, Icahn and Gundlach

Federal Reserve chairman Jerome Powell is set to testify before lawmakers twice this week, with his first appearance coming at 11 a.m. Eastern before the Joint Economic Committee.

But in published remarks ahead of his testimony to Congress, Powell said interest rates are on hold unless there is a material deterioration of the economy.

“We see the current stance of monetary policy as likely to remain appropriate as long as incoming information about the economy remains broadly consistent with our outlook of moderate economic growth, a strong labor market, and inflation near our symmetric 2% objective,” Powell said, in remarks prepared for delivery to the Joint Economic Committee of Congress.

The Fed has cut interest rates in three quarter-point moves since July, putting the Fed’s benchmark federal funds rate in a range of 1.5%-2%.

Powell’s testimony “suggests that the bar to raise rates is higher than to lower them, even if easier policy is no longer the default option,” said Sal Guatieri, BMO Capital Markets senior economist.

In international trade news, in a Wednesday speech at the Economic Club of New York, Trump said a “significant phase one” deal could happen soon, but only if the deal worked to the advantage of U.S. workers and businesses. News reports also indicated Trump might put off a decision, due Wednesday, on whether to impose tariffs up to 25% on European auto imports.

The Wall Street Journal late Wednesday reported that tariffs were emerging as the main stumbling block to efforts by the U.S. and China to reach a limited trade deal. Specifically, the hurdle surrounds whether the U.S. has agreed to remove existing tariffs as part of a partial phase one deal or whether the U.S. would only cancel tariffs that are set to take effect on Dec. 15, the report said.

“Investors still seem to think this is mostly theatrics judging by the muted market reaction so far, but there’s no denying that even a partial deal is no longer ‘a sure thing,’” said Marios Hadjikyriacos, investment analyst at XM, in a note.

“Overall, the calm in the trade war and the broader risk-on sentiment of recent weeks may be more fragile than they appear, and with markets having gone on a euphoria rally lately, it might not take much bad news to trigger a notable correction,” he said.

U.S inflation was slightly higher than expected in October, the Labor Department said Wednesday morning. The consumer price index was up 0.4% during the month, a bit higher than the MarketWatch consensus forecast of 0.3% rise. Americans paid higher prices for gasoline, medical treatment and recreation in October, but overall, inflation remained low and stable. For the year the cost of living rose 1.8%.

Shares of Canada Goose GOOS, -9.71% surged as trading began after beating earnings. Luckin Coffee LK, +13.86% shares were up by double-digits after reporting higher-than-expected revenue despite a wider loss.