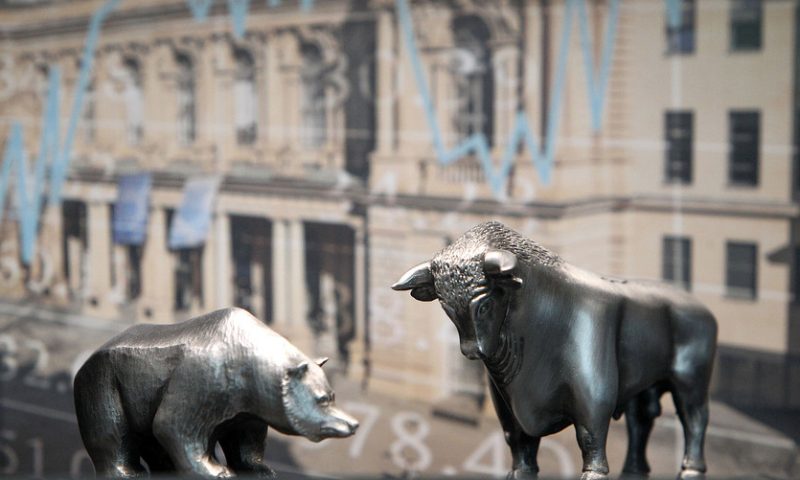 U.S. stocks recovered from early losses to trade mixed Thursday after a report on the U.S. services sector showed it growing at a slower pace than at any point since 2016, following a report on manufacturing earlier this week that showed it contracting for the second month in a row.

However, the chances of another interest rate cut by the Federal Reserve increased following the release of weak data on the services sector. Expectations for an October rate cut jumped to 93.5% from 77% on Wednesday.

The Institute for Supply Management’s index of the health U.S. services sector came in 52.6%, in September, down from 56.4% in August, and below economists expectations of 55.3%, according to a MarketWatch poll of economists.

Any number above 50% indicates an expanding services sector, but the reading appears to show its growth slowing rapidly just two days after ISM’s survey of the U.S. manufacturing sector showed it in outright contraction for the second month in a row.

“The sharp drop in the ISM non-manufacturing index last month to a three-year low, together with the already-reported fall in the manufacturing index to a decade low, leaves a weighted average of the two at a level that has historically been consistent with a recession,” wrote Michael Pearce, senior U.S. economist at Capital Economics, in a note. “Nevertheless, this is not a perfect recession indicator – with that weighted average producing false positives in both 2012 and 2016.”

In other data, the Labor Department estimated that the number of Americans applying for new jobless benefits rose to a one-month high of 219,000, potentially effected by a three-week-old strike at General Motors Inc., though the number of jobless claims remain near historic lows.

A private-sector employment report from Automatic Data Processing on Wednesday showed that a modest 135,000 jobs were created in September, coming after the weakest reading in manufacturing activity from ISM in about a decade on Tuesday. The U.S. Labor Department publishes its employment report for September on Friday.

European data on Thursday also reflected a worsening outlook for the global economy, as the IHS Markit composite purchasing managers index fell to 50.1 in September from 51.9 in August, marking the lowest reading since June 2013. On top of that, the U.K. services purchasing managers index came out at a six-month low of 49.5, as the British economy contends with Prime Minister Boris Johnson’s plans to exit from the European Union.

Investors also were digesting news that the U.S. will impose some $7.5 billion in import duties on goods from the EU, including jetliners, Irish and Scotch whiskies, cheeses and hand tools, starting later this month, after the U.S. won World Trade Organization backing on Wednesday.

A number of other Fed officials are set to speak on Thursday, including Fed Gov. and Vice Chairman for Supervision Randal Quarles, who gave a speech in Brussels at 8:30 a.m. ET, Cleveland Fed President Loretta Mester, set to speak at after noon, and Fed No. 2 Richard Clarida, who is slated to speak on the outlook for the economy and monetary policy at 6:35 p.m.

Shares of PepsiCo Inc. PEP, +4.05%  rose Thursday after the beverage and snack maker said that third-quarter profit fell less than analysts expected, while revenue rose more than expected. The company reaffirmed its outlook for full-year sales growth of 4%.

Shares of Constellation Brands Inc. STZ, -6.70%  were under pressure Thursday morning after the distributor of Corona beer swung to a loss in the second-quarter, following its recognition of losses of $484.4 million on its investment in the Canadian cannabis firm Canopy Growth Corp.

Bed Bath & Beyond Inc. BBBY, -0.70%  reported second-quarter results Wednesday evening, disappointing investors with same-store sales that fell 6.7%, more than the 5.4% expected by Wall Street. Credit Suisse cut its price target on the stock to $14 from $18.

Shares of Tesla Inc. TSLA, -6.47%  were down after the electric-car manufacturer reported Wednesday evening that it delivered 97,000 vehicles in the third-quarter, below the 99,000 vehicles expected by analysts polled by FactSet.

U.S. Treasury yields extended their slide on Thursday. The yield on the 10-year U.S. Treasury note TMUBMUSD10Y, -3.32%  fell 7 basis points to 1.53% in reaction to the ISM report on the U.S. service sector slowdown.

Oil futures dropped, with the U.S. benchmark on track for its eighth straight daily decline and another finish at its lowest in two months, as worries over global demand persist. West Texas Intermediate crude-oil for November delivery CLX19, -0.97%  was down $1.21 to about $51.43 a barrel on the New York Mercantile Exchange, after falling 1.8% and settling at a 2-month low on Wednesday.