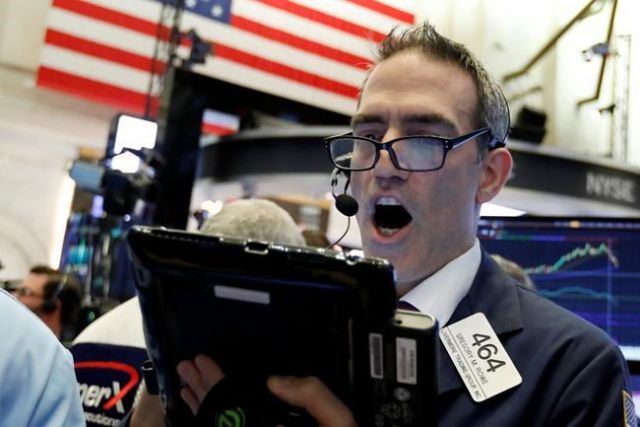 U.S. stocks were easing back Tuesday from a steep, broad sell-off that knocked more than 500 points off the Dow Jones Industrial Average earlier in the day.

Even with the late-afternoon rebound, stocks were on track to extend the market’s recent string of losses, including a four-day losing streak for the benchmark S&P 500 index. Bond prices rose, sending yields lower, as investors sought out safer investments.

China’s economy grew 6.5 per cent from July to September, the slowest pace since early 2009. The world’s second-largest economy was cooling even before the outbreak of a tariff war with Washington. That contrasts with the momentum of the U.S. economy. The government is expected to say Friday that the U.S. economy grew by 3.3 per cent in the third quarter, after growing by 4.2 per cent in the second quarter.

The strong U.S. economy has helped power earnings growth for companies in the S&P 500. While those companies are expected to deliver 21.9 per cent earnings growth for the third quarter, investors are concerned about future growth amid rising inflation, interest rates and uncertainty over trade.

“That’s the story, it’s not the current quarter results, but the commentary going forward, the impact of tariffs and what that means in terms of costs,” said Willie Delwiche, an investment strategist at Baird. “If tariffs didn’t come up in earnings calls and commentary, then maybe you could say we were moving away from that, but the opposite is happening.”

Caterpillar’s stock price tumbled after the heavy equipment manufacturer warned that Trump’s taxes on imported steel were driving up production costs. The stock skidded 7.2 per cent to $119.31.

3M Co. fell 3.8 per cent to $193.67 after its earnings missed Wall Street’s targets. The industrial manufacturer said it expects raw material prices to continue climbing, and for tariffs to have a roughly $100 million negative impact on the company’s sourcing costs next year.

Caterpillar and 3M were, by far, the biggest decliners in the 30-company Dow average.

Losses in banks, energy and technology companies outweighed gains by internet and consumer-goods stocks. A sharp sell-off in Chinese and other global markets set the stage for the turbulent day on Wall Street.

Bond prices rose, sending the yield on the 10-year Treasury note down to 3.17 per cent from 3.19 per cent late Monday.

Markets have been rattled in recent weeks by increased worries over the impact that rising interest rates, inflation and the escalating trade dispute between the U.S. and China may have on Corporate America.