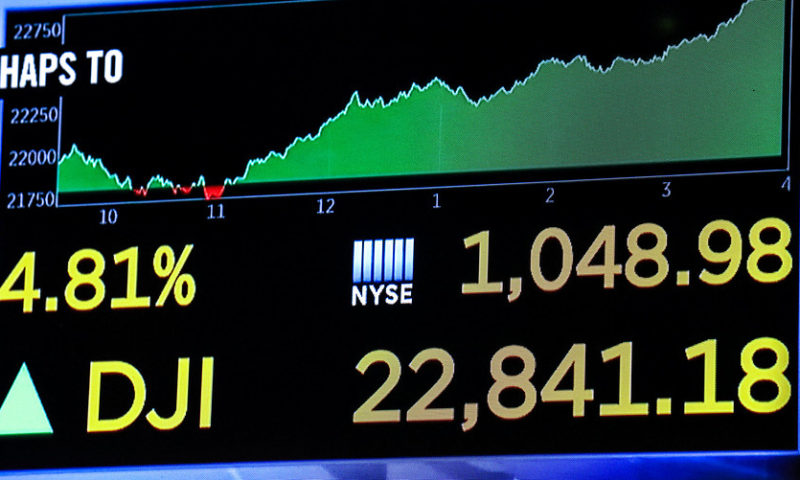 Volatility reigned on Wall Street Thursday, with U.S. stocks falling sharply to give back a large chunk of the previous day’s massive rally, which in turn was a snapback from the worst Christmas Eve performance in stock-market history.

On a percentage basis, all three major indexes logged the strongest one-day gains since March 23, 2009, and it was the best ever day-after-Christmas performance for the gauges. It comes on the heels of a brutal selloff in a shortened Christmas Eve session Monday, which featured the lowest closes for all three indexes since 2017.

Even with all that, all three major indexes are down more than 10% for the month to date and the Nasdaq remains in bear-market territory.

Volatility looked set to stick with the market, which tends to see quieter-than-normal volumes due to the Christmas holidays. Stocks will see another break in trade next week when markets close for New Year’s Day.

There are some concerns that Wednesday’s big move was overdone, which could be reflected in yen strength USDJPY, -0.62%  against the dollar — the Japanese currency is often viewed as a haven for investors in times of economic and market uncertainty. And after jumping from 17-month lows, oil was softer on Thursday, while the yield on the 10-year Treasury note TMUBMUSD10Y, -2.20%  slipped to 2.759%.

And while investors got assurance over Federal Reserve Chairman Jerome Powell’s job on Wednesday, there remains no resolution to other big issues, such a continuing government shutdown as Washington tussles over funding for Trump’s proposed border wall.

There was upbeat news for global trade, with the U.S. expected to send a delegation to hold talks with Chinese officials during the week of Jan. 7, according to Bloomberg News. It would mark the first meeting since the G-20 summit in Argentina earlier this month, which yielded a 90-day tariff truce.

However, trade optimism might be tempered by a report from Reuters that the Trump administration is moving closer to issuing an executive order in the new year that would ban U.S. companies from using telecommunications equipmentmade by China’s Huawei 002502, -3.63%  and ZTE 000063, +0.20%

What are investors saying?

Analysts cautioned that volatility is likely to remain pronounced, while skeptics questioned whether the market’s Wednesday bounce could be sustained.

“While yesterday’s price action is definitely a positive sign, it’s still too early to conclude whether the market correction is over or more downside is yet to come,” said Hussein Sayed, market strategist at FXTM, in a note.

“Such rallies are not uncommon in troubled times, and we have experienced many of them in past bear markets. To call for a bottom, we need at least a couple of days of strength, not just in price, but also in trading volume, breadth of the market, and fundamentally supported environment,” he said.

The partial government shutdown means investors won’t see a full economic calendar on Thursday. Weekly jobless claims data was still released, but November data on new home sales will be delayed to another day. Consumer confidence data for December will be on tap at 10 a.m. Eastern.

First-time claims for unemployment benefits fell by 1,000 to 216,000 in the week ended Dec. 22, the Labor Department said Thursday. Economists polled by MarketWatch had forecast a reading of 217,000.

The road to homeownership: buying a house in Philadelphia