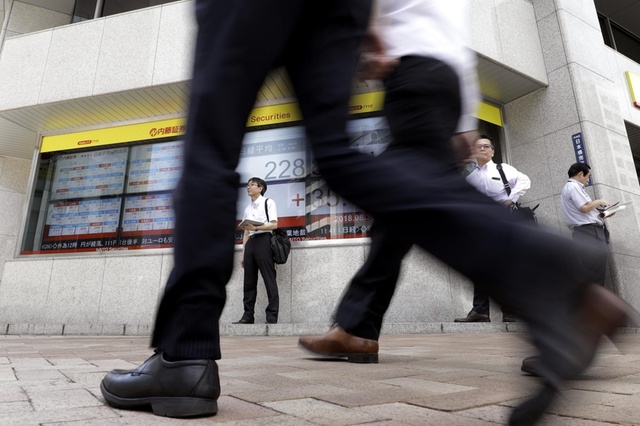 Stocks slipped on growing concern about the outlook for global trade and U.S. politics. Oil rallied toward a four-year high.

Industrial shares led the S&P 500 Index lower after China warned it won’t meet with American officials unless they stop threatening to expand tariffs, while reports that Deputy Attorney General Rod Rosenstein will leave his post also weighed on stocks. The Nasdaq 100 eked out a gain as the largest tech shares advanced. Comcast Corp. plunged after agreeing to buy Sky Plc.

An uptick in political tensions and the escalation in cross-Pacific trade tensions are testing global equities, which have posted two strong weeks of gains in part due to optimism that economies can weather any potential tariffs. JPMorgan Chase & Co. said it’s starting to factor into its strategy a growing potential for a “Phase III” of the tariff war next year affecting all Chinese imports, which would lead to weaker growth in the country and hit U.S. stocks.

“Geopolitical disruption can certainly grab headlines and rock capital markets in the short term,” said Kristina Hooper, chief global market strategist at Invesco Ltd. “However, I continue to caution that investors focus on the geopolitical disruption that actually has the potential to impact fundamentals – and that is trade. Everything else is just noise.”

Coming up this week is the Federal Reserve’s policy meeting that will likely see interest rates increased for the third time this year, with markets increasingly pricing for another one in December.

Elsewhere, Hong Kong stocks fell as holidays in China and Japan reduced volume. Indian shares and the rupee slid as cracks appear in Asia’s best-performing stock market this year amid concerns about troubles in the non-bank financial sector. Emerging-market shares weakened and their currencies edged lower.

Brent crude climbed above $80 a barrel as OPEC and its allies signaled less urgency to boost output despite U.S. pressure. The pound strengthened on increasing talk of a second U.K. referendum on the final Brexit deal.

Here are some key events coming up this week:

These are the main moves in markets: