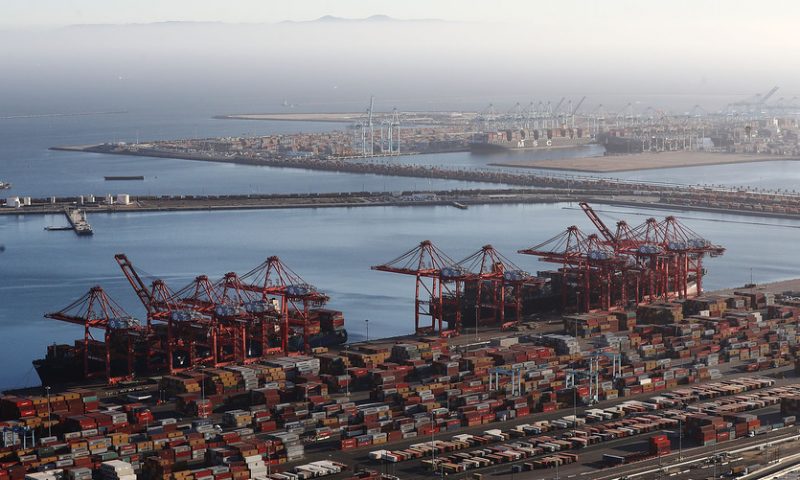 U.S. stocks closed mixed Wednesday, after seeing record highs in recent days, as markets weighed a report that an interim China-U.S. trade deal could be delayed until December and weakness in the energy sector underscored by disappointing corporate quarterly results.

Investors digested a report from Reuters that said a long-awaited interim trade deal between the U.S. and China could be delayed until December as discussions continue between the world’s two-largest trading partners about terms and a venue for a meeting.

From the U.S. side, there still was optimism that an agreement could be reached with China on the first segment of trade issues up for discussion.

“Negotiations are continuing and progress is being made on the text of the phase-one agreement. We will let you know when we have an announcement on a signing location,” said Judd Deere, White House spokesman.

Even so, stocks were struggling to find a catalyst to move beyond recent all-time highs.

“We’ve been rallying on the anticipation of a trade deal and the Reuters news report has caused a slight pullback,” said Peter Boockvar, chief investment officer at Bleakley Advisory Group, in an interview.

“The market may take a breather from here,” Boockvar told MarketWatch, noting that market sentiment has gotten extremely bullish on the back of last week’s Federal Reserve interest rate cut and on optimism about the prospects for a coming trade truce. “If we don’t get a deal, that’s a different story,” he said.

A preliminary, or “Phase One” trade deal between China and the U.S. is still a hope, but some strategists worry that the market may be placing too much emphasis on a deal coming to fruition soon.

“The market has taken an overly optimistic view on the Phase One deal, nudged on by better US economic data of late,” wrote Stephen Innes, market strategist at AxiTrader. “So, with delay comes chance that risk-on sentiment has too long to ferment, stalls and then maybe reverses as the waiting game weighs,” he said.

Also on the trade front, Reuters reported that China’s state-owned agriculture conglomerate COFCO struck a deal to buy $100 million of pork next year from European producer Danish Crown, a potential blow to American hog supplies that fueled a near 4% drop in December lean hog futures LHZ19, +0.04%.

Energy exploration and production companies have been a clear area of weakness again this reporting season, said Diane Jaffee, a senior portfolio manager at TCW.

“A host of E&P companies have reported over the past couple of days and it’s been widely discouraging,” she told MarketWatch.

Shares of Diamondback Energy FANG, -14.44% lost 14.44% Wednesday, its largest ever percentage fall according to Dow Jones Market data, after the shale operator reported a dip in profits due to lower oil and gas prices. Shares of Occidental Petroleum Corp. OXY, -5.49% shed 5.49%.

Chicago Fed President Charles Evan on Wednesday said the U.S. economy may not need additional interest rate cuts, noting that the economy appears “quite resilient,” in an interview with Yahoo Finance.

Shares of Xerox Holdings Corp. XRX, +3.55% closed higher after the Wall Street Journal said the company is considering a cash-and-stock offer for personal-computer and printer-maker HP Inc. HPQ, +6.36%, which has a market value of about $27 billion. HP gained 6.36%.

WW International Inc., WW, -14.82% the company formerly known as Weight Watchers, raised its outlook for the year but the after-hours stock movement indicated that the hike left too much chance of a disappointment for Wall Street’s taste. The stock closed down 14.82%.

Shares of NewYork Times Co. NYT, -3.85% slipped 3.85% after the media company said it sees continued turbulence in digital ads as it reported its quarterly results.

Reporting after the bell, Qualcomm QCOM, -0.97% beat diminished earnings expectations, with the stock closing less than a point lower.

How are others assets trading?