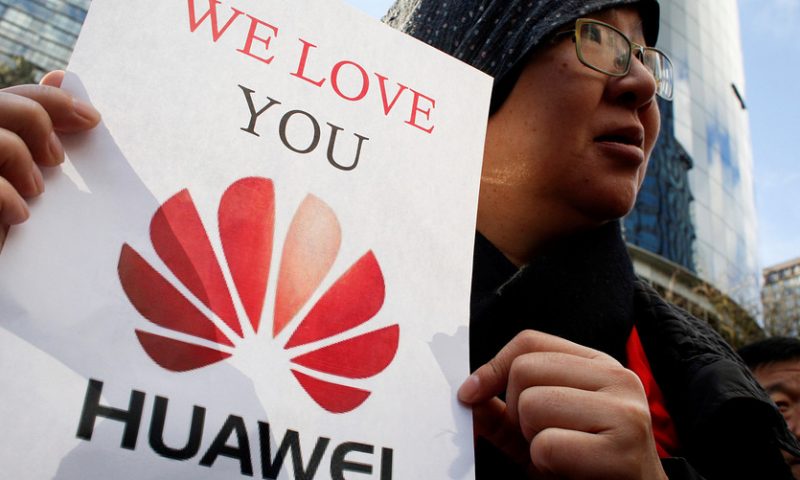 U.S. stocks closed lower Monday as souring U.S.-China trade relations continued to weigh on sentiment, with technology shares taking the brunt of the selling pressure. A uniform decline in blue-chip tech names such as Apple Inc., Intel Corp. and Cisco Systems Inc. highlighted the vulnerability of some of the market’s most valuable companies to the adverse impact of the prolonged trade fight.

Sino-U.S. trade tensions continued to escalate, with shares of chip makers taking it on the chin as U.S. technology companies have begun to comply with the White House’s ban on China’s Huawei Technologies Inc.

Bloomberg News reported Sunday that Xilinx XLNX, -3.56% XLNX, -3.56% and other U.S. chip makers, including Intel INTC, -2.96% , Qualcomm Corp.QCOM, -5.99%  and Broadcom Inc. AVGO, -5.97%  have frozen the supply of critical software and hardware components to Huawei. The Wall Street Journal reported separately that Alphabet Inc.’s GOOGL, -2.06% GOOG, -2.02% Google will cease selling some services for devices made buy Huawei, which relies on Google’s Android software to run its smartphones.

Chances of further trade talks between the U.S. and China appeared to take a hit over the weekend after CNBC reported that scheduling for the next round of negotiations is “in flux,” because neither side appears willing to agree to concessions. The South China Morning Post also cited several China-based analysts who argued that China has little incentive to engage in further talks until U.S. negotiators show willingness to compromise.

Which data and Fed speakers were in focus?

The Federal Reserve Bank of Chicago’s national activity index plunged to a negative-0.45 in April, down from an upwardly revised positive-0.05 in March and a negative-0.31 in February. A reading less than zero indicates below-trend economic growth.

Atlanta Federal Reserve Bank President Raphael Bostic said Monday morningthat he wasn’t sure whether the central bank would move next to raise or lower interest rates, while saying he expects growth of 2.25% to 2.5% this year, a slowdown from last year’s levels.

Fed Chairman Jerome Powell will give a speech at the Atlanta Fed conference at 7 p.m. Eastern.

“At the margin, the global trade situation is deteriorating, and that increases uncertainty,” Willie Delwiche, investment strategist at R.W. Baird, told MarketWatch. “These trade concerns are not going away, and so the question is: Does it have a meaningful impact on consumer and business confidence?” he said.

Delwiche also noted that, so far, measures of confidence remain elevated, but the longer that trade uncertainty remains, the likelier the odds that it has lasting impact on markets and the economy.

“Market volatility continues to stem from announcements and interpretations of what is going on in trade disputes between the U.S. and its trading partners, but principally China,” said Jasper Lawler, head of research at London Capital Group, in a daily research note.

Shares of Sprint Corp. S, +18.77% rallied 13% after Federal Communications Chairman Ajit Pai issued a statement Monday endorsing its planned merger with T-Mobile US Inc. TMUS, +3.87% after the companies told the commission that they “would take a series of significant steps if the companies’ merger application is approved,” including committing to build out a new 5G system that would cover 90% of rural America within six years.

Shares of money manager Legg Mason Inc. LM, +0.99% gained 1% following reports that it is nearing a settlement with Trian Fund Management LP that would give the activist investor three to four seats on the company’s board.

Shares of Blue Apron Holdings Inc. APRN, -8.32% sank 8.3% after the meal-kit preparation company said it is pursuing plans for a reverse stock split.

Ford Motor Co. F, -0.10% shed 0.1% after the auto maker began a round of layoffs Monday that will ultimately result in the elimination of 7,000 salaried positions internationally, or about 10% of its white-collar workforce.