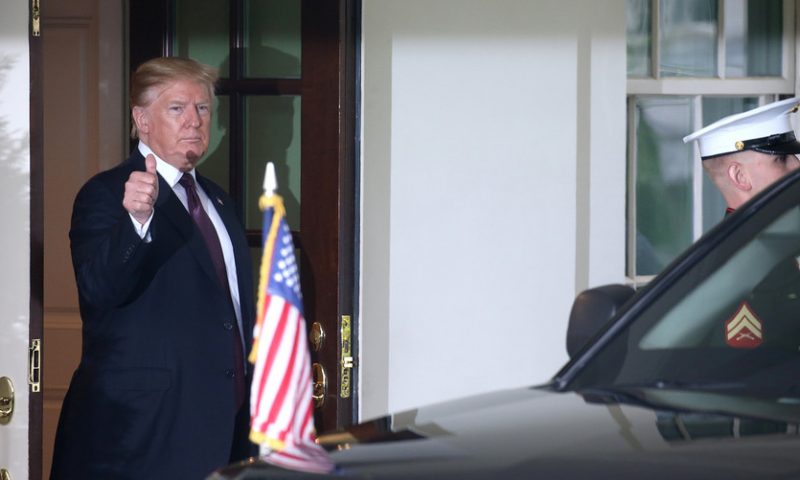 Trump: ‘When the time is right, we will make a deal with China’

U.S. stocks closed higher Tuesday as the market regained some of its bullish form, a day after a sharp escalation in U.S.-China trade tensions triggered the worst session for major indexes since early January.

How did the benchmark indexes fare?

The start of the week was marked by a ramp-up in trade tensions after China fired back at U.S. tariffs with retaliatory duties that could reach 25% on $60 billion in annual U.S. exports. That was after the U.S. last week raised tariffs on $200 billion in annual Chinese imports to 25% from 10%, and threatened more following talks that ended Friday without a deal between the two countries.

Investors are worried that an escalating fight between the two could harm the U.S., Chinese and global economies.

But some calm appeared to have been restored after President Donald Trump said late Monday that it should be clear in “three or four weeks” if a U.S. delegation’s recent trip to China to discuss trade was successful. “I have a feeling it’s going to be very successful,” he added.

Tuesday morning, the president took to Twitter to defend his trade strategy and mollify U.S. farmers, whose exports have collapsed amid the dispute, writing that: “When the time is right, we will make a deal with China. My respect and friendship with President Xi is unlimited but, as I have told him many times before, this must be a great deal for the United States or it just doesn’t make any sense.”

The president also kept up public pressure on the Federal Reserve to lower interest rates as a means to help the U.S. economy cope with the effects of the trade spat.

What economic data and speakers were in focus?

Small-business optimism rose to a four-month high in April, gaining 1.7 points to 103.5, according to the NFIB Small Business Optimism index, released Tuesday morning.

New York Fed President John Williams, speaking in Zurich, said early Tuesday that governments can play a role in changing the post-financial-crisis environment where short-term rates are lower than they have been historically.

“There is still the a belief that a trade deal gets done because it’s in both parties’ best interest,” Brent Schutte, chief investment strategist at Northwestern Mutual Wealth Management, told MarketWatch. “The market is giving the benefit of the doubt because it believes the Fed is there to put a bottom in the market,” if the trade dispute causes markets to fall to such an extent that it impacts the broader economy.

“The next key thing to look for is whether Xi and Trump talk on the phone at some point and try to get talks back on track. However, our concern is that it will require financial stress to create the necessary pressure to get the deal done,” said analysts at Danske Bank, in a note to clients.

Apple Inc. AAPL, -0.55% shares rose 1.6% after shedding 5.8% Monday in the wake of a Supreme Court ruling that consumers can sue the company for forcing them to buy apps exclusively through the company’s App Store.

Shares of Ralph Lauren Corp. RL, -1.75% fell 3.7% even after the clothing retailer reported first-quarter sales and profits that surpassed Wall Street expectations, while raising its quarterly dividend by 10%.

Abercrombie & Fitch Co. ANF, +1.00% shares edged up 0.3% after the retailer said Chief Operating Officer Joanne Crevoiserat will leave the company as it has decided to eliminate the COO role.

Shares of Comcast Corp. CMCSA, +0.42% gained 1.5% after the cable giant announced that it has agreed to sell its 33% stake in Hulu in five years to Walt Disney Co. DIS, +0.08% for at least $27.5 billion, while immediately giving up its voting rights over the streaming company.

US Industrial Production Down 0.5% in April