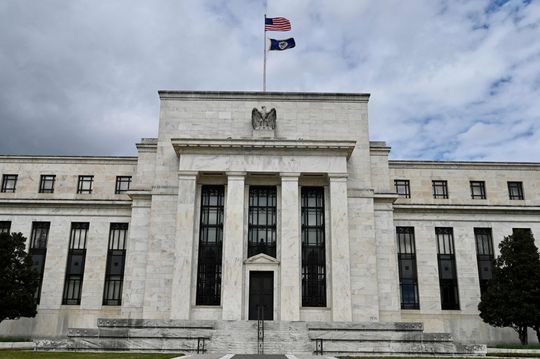 “Fedspeak has become increasingly more hawkish with a noted dove hinting that balance-sheet reduction could begin as soon as next month,” said Joe LaVorgna, chief economist for the Americas at Natixis CIB. “This led to a bearish steepening in rates, but thus far stock market investors are unperturbed,” at least for now, he said.

On Tuesday, Fed Gov. Lael Brainard told a conference in Minneapolis that the central bank, in an effort to cool down inflation, will “continue tightening monetary policy methodically through a series of interest-rate increases and by starting to reduce the balance sheet at a rapid pace as soon as our May meeting.”

The Fed’s balance sheet has doubled to nearly $9 trillion as a result of a resumption of asset purchases at the onset of the COVID-19 pandemic. The liquidity provided by an expanded balance sheet has been cited as a factor in the stock-market rally that followed the short, COVID-induced bear market in the spring of 2020, as well as the rise in the value of a range of other assets.

“This was tough talk from a monetary dove,” LaVorgna said, referring to Brainard, in a note. “Furthermore, when a policy maker states ‘as soon as our May meeting’ that is Fedspeak for the action to come at that meeting. It is no wonder there was a bearish steepening of the Treasury yield curve.”

Meanwhile, stocks weren’t weren’t entirely unperturbed. The jump in yields was blamed for sinking rate-sensitive tech shares and other so-called growth stocks, with the Nasdaq Composite COMP, -2.26% slumping 2.3%, while the S&P 500 SPX, -1.26% fell more than 1% and the Dow Jones Industrial Average DJIA, -0.80% lost around 281 points, or 0.8%.

The Fed previously moved to shrink its balance sheet in 2017. Over the next two years, it fell to $3.6 trillion from $4.2 trillion before a bout of volatility in money markets brought the process to a halt. The Fed has backstops in place this time around that policy makers expect to prevent a repeat.

Caps refer to the amount of securities that would be allowed to run off the balance sheet each month.

Brainard’s remarks likely whetted investor appetite for minutes of the Fed’s March policy meeting, due Wednesday, which are widely expected to offer more specific details on the central bank’s tactics around shrinking its asset portfolio.

The prospect of a more rapid balance-sheet reduction is what should have stock-market bulls concerned, LaVorgna said.

Assuming the Fed also allows $260 billion in bills to mature, the balance sheet could shrink $645 billion in just eight months, LaVorgna said. In the previous episode, it took 22 months to hit the same target. 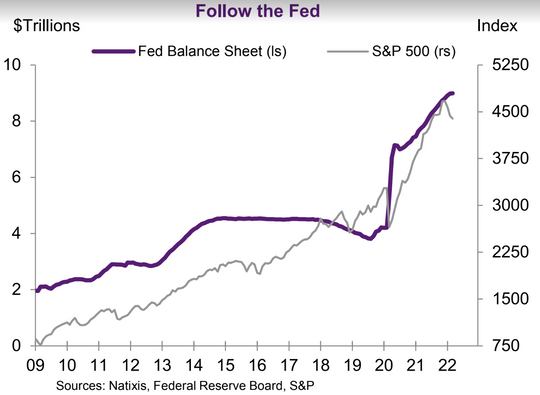 “What will it mean for equities?” LaVorgna asked. Referring to the chart above, he argued that the size of the Fed’s balance sheet and the level of the S&P 500 have been highly correlated. “Hence, stocks could be in for a rough ride ahead,” he wrote.