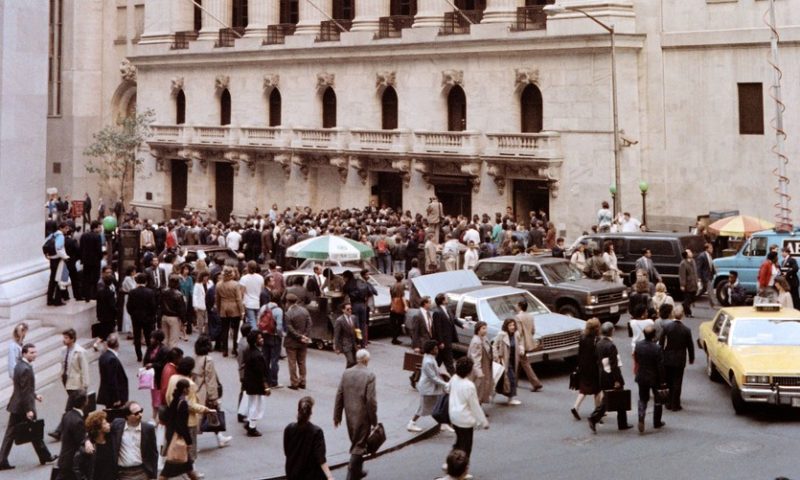 The market’s choppy action coincides with the 31st anniversary of the 1987 crash.

For the week, the blue-chip index gained 0.4% and the S&P 500 rose fractionally, successfully snapping a three-week retreat while the Nasdaq shed 0.6% to extend losses into a third week.

Existing-home sales fell 3.4% in August, according to the National Association of Realtors, the lowest level since November 2015.

Corporate earnings have been healthy with more companies reporting better-than-expected earnings per share above the five-year average, according to data from FactSet.

China’s main equity benchmarks posted their best daily gains since early August to end the week on a high note, after Beijing officials offered calming comments about the health of the economy following third-quarter gross domestic product that came in weaker than expected.

China’s GDP grew 6.5% between July and September from the same quarter a year earlier, down slightly from 6.7% growth in the previous quarter and falling short of analysts’ expectations of 6.6% growth. However, the disappointing results were shaken off after officials said they were focused on supporting the stock market, offering a brief respite for a region that has seen withering losses amid a trade clash with the U.S.

Investors fear that if China, the second-largest economy, begins to experience further pains, it could spillover first into emerging-market economies and then developed markets like the U.S.

Market participants were also watching escalating tensions between the U.S. and Saudi Arabia as Treasury Secretary Steven Mnuchin on Thursday announced that he was pulling out of an investment conference in Riyadh in response to the disappearance of Saudi journalist Jamal Khashoggi, a U.S. resident.

“The weakness among home builders is likely dragging us a down a bit today,” said Mike Loewengart, vice president of investment strategy at E-Trade, in reference to stocks coming off earlier highs. “Let’s not forget October is a spooky month for the markets, where big gains and losses can disappear quick. This truly is a dogfight between the bulls and the bears, and really between strong fundamentals and nagging issues right on the horizon. What we’re seeing though is some consolidation as the market tries to find its course.”

Alec Young, managing director of global markets research at FTSE Russell, told MarketWatch that Thursday’s pullback should cause investors to question whether third-quarter earnings season will be enough to power stocks to new highs.

“Everyone accepts that earnings growth will slow next year and that interest rates are going to rise,” he said. “Historically that’s not a great cocktail for stocks.” Young also pointed to a weakening global economy and an overly hawkish Fed as reasons for caution going forward. “I think there’s a chance that the bull market has peaked,” he said.

“The event calendar is rather empty and is thus highly unlikely to come to the markets’ rescue. Focus will again be on earnings, any progress in the Kashoggi case, and the development of the” spread between German and Italian bond yields, wrote analysts at UniCredit in a note.

Shares in PayPal Holdings Inc. PYPL, +9.42% surged 9.4% after the company boosted its outlook for the fourth quarter.

Shares of eBay Inc. EBAY, -8.87% tumbled 8.9% after analysts at Stifel Nicolaus downgraded the stock from buy to hold, citing PayPal’s earnings release, which suggested that the online retail would post disappointing gross merchandise volume when it reports on Oct. 30.

Chemical giant DowDuPont Inc. DWDP, -1.86% fell 1.9% after it said late Thursday that it is taking a $4.6 billion charge in the third quarter.

American International Group Inc. AIG, -2.90% shares slid 2.9% after the insurer said it expects to post between $1.5 billion and $1.7 billion in pretax catastrophe losses.

Shanghai’s Composite Index SHCOMP, +2.58% rallied 2.6% to mark its best one-day rise since Aug. 7, according to FactSet data, while the small-capitalization Shenzhen Composite 399106, +2.58% also jumped 2.6%, representing its best session since Aug. 9.