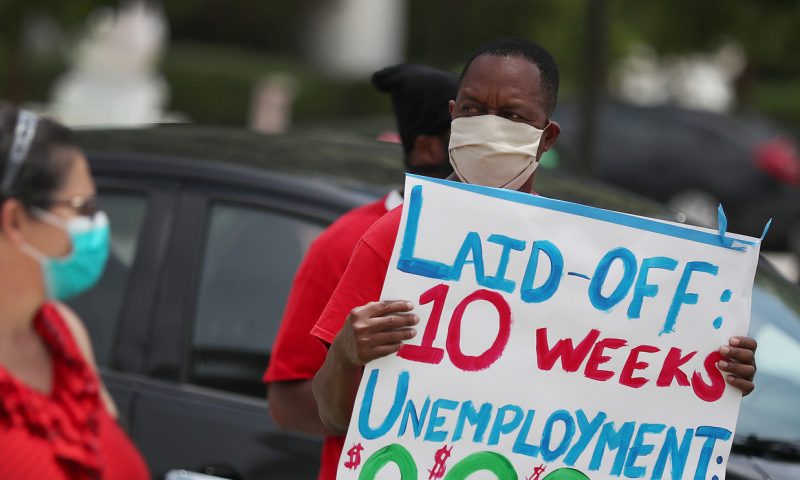 U.S. stock-index futures were trading slightly lower Thursday morning, but pared earlier losses after the European Central Bank announced plans to increase its emergency stimulus program. Investors will also be watching for a report on weekly U.S. jobless claims to gauge whether the worst of the impact of the coronavirus pandemic has passed.

The Nasdaq Composite index had rallied to within 2% of its all-time high this week as a gradual restart to the U.S. and world economies from the business closures to combat the pandemic helped support bullish sentiment.

At least 1.8 million jobless U.S. workers are expected to have applied for unemployment benefits in the week ended May 30, according to economists polled by MarketWatch. However grim, that data could underscore that the economy may have seen the worst of the impact of the epidemic. The report is expected to be released at 8:30 a.m. Eastern.

Private-sector employment data on Wednesday showed that a total of 2.76 million jobs were lost in May, Automatic Data Processing Inc. reported, but that loss was far less severe than the 8.66 million forecast by Econoday.

Equity benchmarks in the U.S. have rallied mightily from their March 23 lows, partly on the back of optimism surrounding the reopening efforts and evidence of a slowing spread of the deadly infection as the summer gets underway.

Trillions of dollars in stimulus from the Federal Reserve and the U.S. government, underpinning financial markets, also have helped to drive the value of assets sharply higher from their March nadirs.

Investors were also digesting the decisions by Europe’s central bank to deliver further stimulus to its battered economy. Led by Christine Lagarde, the ECB said it would expand its Pandemic Emergency Purchase Program by €600 billion, or $674.5 billion. The central bank also said it would extend the program until June 2021, and reinvest maturing PEPP securities until at least the end of 2022. Lagarde will host a news conference at 8:30 a.m. Eastern to discuss those policy actions.

That move came as German Chancellor Angela Merkel’s coalition agreed on a €130B economic stimulus package to boost consumer spending and business investment, according to Bloomberg News. Germany, which has a history of fiscal prudence, last month backed an agreement, along with France, for an upsized €750 billion coronavirus European Union-wide recovery fund.

Thus far, U.S. civil unrest centered on the death of an unarmed black man at the hands of a white police officer in Minnesota hasn’t been reflected in stock-market trading, nor have rising tensions between China and the U.S., even as the Trump administration suspended flights to the U.S. by Chinese airlines in apparent retaliation for Beijing halting American flights bound for China.

In other U.S. economic reports, investors will be looking out for a report on international trade at 8:30 a.m., a report on productivity costs at the same time and an update of the Fed’s balance sheet at 4:30 p.m.

Oil prices were under pressure Thursday amid uncertainties over a OPEC+ meeting, with West Texas Intermediate crude for July delivery CLN20, -0.75% off 57 cents, or 1.5%, to at $36.72 a barrel on the New York Mercantile Exchange.

The 10-year Treasury note yield TMUBMUSD10Y, 0.751% was unchanged at 0.745%, after marking its highest level since April 8, according to Dow Jones Market Data. Bond prices move in the opposite direction of yields.

Europe’s stock-market rally is leaving the U.S. behind as ECB and governments step up, analysts say