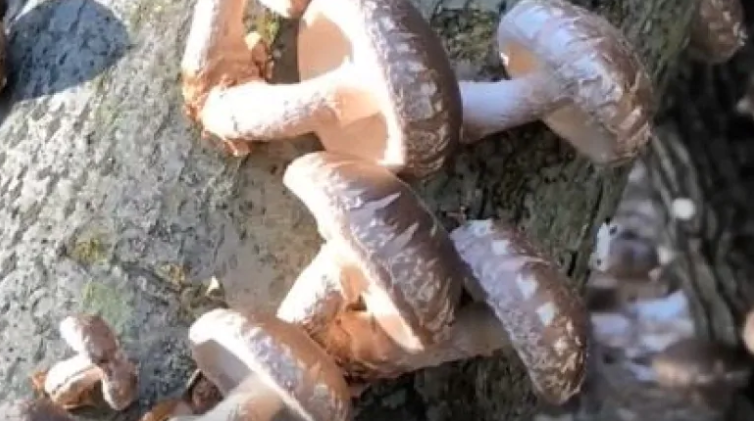 Rocky Hartley remembers picking up a magazine at a fuel stop near Parry Sound and reading an article all about mushroom farming.

That was all it took for the St. Joseph Island resident to dive into the world of shiitake mushrooms.

Before the shiitakes, Rocky and his family operated a sugar bush on their land.

“I think the kids and I have been good sports about all of Rocky’s habits and hobbies,” said his wife, Kirsti Hartley.

“He’s not a guy who ever dips a toe in the waters to check it out. He jumps in with both feet.”

The Hartleys have been growing shiitake mushrooms for five years now, at their family business, Crazy Tree Farms.

The process starts with finding live trees in the bush.

“Almost any of our hardwoods that we have in this area. So Beech, Sugar Maple. Kirsti here likes the soft maple a little more,” Rocky said.

The trees are then cut into manageable 4 foot lengths, with up to 60 holes drilled in each section.

“We have a mix of spore and sawdust that we put into the holes that are made by Rocky and then they’re capped off with a styrofoam cap to seal in the moisture,” Kirsti explained.

“The ends are waxed to seal in the moisture, and then they lay dormant for a year.”

Over that year, Rocky says mycelium — a mass of branching, thread-like filaments that are part of the fungus — infiltrate the wood.

In the spring, the mushroom logs are soaked in a stock tank for 24 hours.

“We take them out and in a week typically about from that time, depending on the weather, we will have a harvest of fresh shiitake mushrooms,” Kirsti said.

Rocky still remembers the first crop of mushrooms they ever grew.

“I was just out for a walk on a beautiful fall day and there was a couple of dozen shiitake mushrooms, just gorgeous things with beautiful caps, looking at me right in the eye,” he said.

The Hartleys sell their mushrooms to restaurants on the island and in Sault Ste. Marie. They also recently started selling at local farmers’ markets.

The mushrooms are priced at $8 per half pound bag, and Kirsti always makes sure to give out some “tried and true” recipes with every purchase, like Hungarian paprika mushroom soup or creamy garlic mushroom lasagne.

“Of all the ideas that Rocky has had, this has been the one that the family can really get behind and it’s not really crazy labour intensive,” she said. “And I think I can speak for the rest of us when I say that it’s been a lot of fun.”

“I brought up making cheese the other day and they said absolutely not!”

India airports: Has PM Modi built more than others?