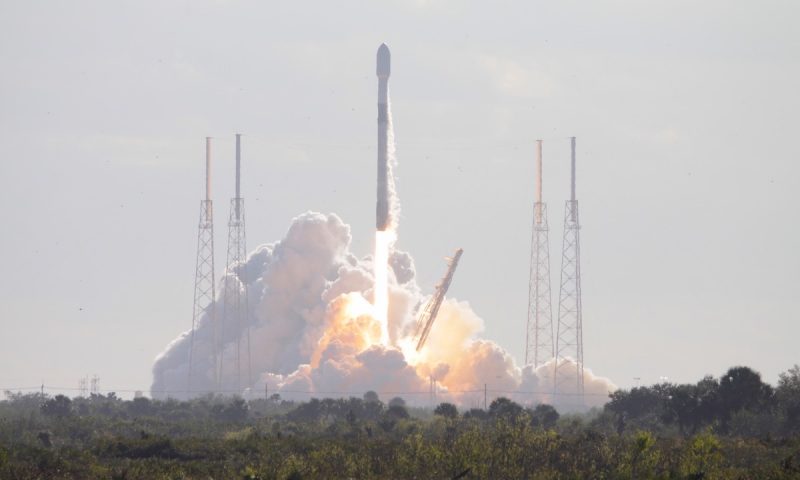 After waiting more than a week for good weather, SpaceX launched a Falcon 9 rocket Wednesday from Cape Canaveral with 60 more satellites for the company’s Starlink Internet network, continuing to build out a fleet of fleet of orbiting broadband relay stations that could eventually number in the thousands.

The 229-foot-tall (70-meter) Falcon 9 rocket fired up at 9:06:49 a.m. EST (1406:49 GMT) Wednesday and climbed away from from Cape Canaveral’s Complex 40 launch pad. An incandescent flame from the rocket’s nine Merlin 1D main engines — collectively generating 1.7 million pounds of thrust — trailed more than 20 stories behind the launcher.

A roar from the Falcon 9’s engines reached spectators a few seconds later as the rocket arced toward the northeast into clear skies over Florida’s Space Coast.

The liftoff Wednesday came after a series of weather delays since last week. After performing a standard pre-launch test-firing of the rocket, SpaceX pushed back the launch from Jan. 21 to Jan. 24, then to Monday, Jan. 27, to wait for improved weather conditions in the Atlantic Ocean, where SpaceX stationed ships to retrieve the first stage and payload fairing from the Falcon 9 rocket.

Two-and-a-half minutes after liftoff, the rocket’s first stage shut down its engines and dropped away from the Falcon 9’s second stage. Seconds later, the upper stage’s single Merlin engine — modified with an enlarged nozzle for better performance in space — ignited to accelerate the 60 Starlink satellites into orbit.

The Falcon 9 jettisoned its clamshell-like payload fairing nearly three-and-a-half minutes into the mission.

Flying tail first, the rocket’s first stage booster reignited three of its nine engines to guide it toward SpaceX’s drone ship “Of Course I Still Love You” positioned around 400 miles (630 kilometers) northeast of Cape Canaveral. A final landing burn using the center engine slowed the booster for a controlled vertical touchdown on the football field-sized barge, marking the 49th time SpaceX has recovered one of its rockets intact.

The booster flown Wednesday was making its third trip to space, following successful launches and landings in March 2019 and June 2019 on flights carrying SpaceX’s Crew Dragon spacecraft and Canada’s Radarsat Constellation Mission. With Wednesday’s mission, the booster has launched from all three of SpaceX’s active launch pads in Florida and California.

SpaceX confirmed Ms. Tree caught one side of the shroud in a giant net. Ms. Chief, equipped with a similar net, failed to snag the other half of the fairing before it fell into the sea, but teams were expected to pull the hardware from the ocean for inspections and refurbishment.

While SpaceX’s teams in the Atlantic were busy recovering pieces of the Falcon 9 rocket for reuse, the launcher’s upper stage — which is not reusable — fired its engine two times to place the 60 Starlink satellites into a targeted 180-mile-high (290-kilometer) orbit inclined 53 degrees to the equator.

SpaceX said the rocket did its job placing the satellites into the proper orbit, and live video from the Falcon 9’s second stage showed the 60 flat-panel satellites separating from the launch vehicle as it flew south of Australia about one hour after liftoff from Cape Canaveral.

The spacecraft were expected to extend their power-generating solar panels, and krypton ion thrusters on each satellite will begin raising their orbits to an altitude of around 341 miles (550 kilometers), where SpaceX intends to operate its first 1,584 Starlink platforms to provide worldwide Internet service.

The Starlink satellites, built at a SpaceX facility in Redmond, Washington, filled the volume of the Falcon 9’s payload fairing. Each satellite weighs around 573 pounds, or 260 kilograms, and the Starlink craft stacked together form the heaviest payload SpaceX has ever launched.

With Wednesday’s launch, SpaceX has deployed 240 Starlink satellites on four dedicated missions since last May. That makes SpaceX the owner of the world’s largest fleet of commercial satellites.

SpaceX, founded by billionaire Elon Musk, has regulatory approval from the Federal Communications Commission to eventually field a fleet of up to 12,000 small Starlink broadband stations. But SpaceX has said the size of the Starlink fleet will grow with demand after the company launches its initial block of 1,584 satellites.

SpaceX says 24 launches are needed to provide global broadband service through the Starlink service. But the company could provide an interim level of service over parts of the Earth later this year, once SpaceX has launched around 720 satellites on 12 Falcon 9 flights.

Gwynne Shotwell, SpaceX’s president and chief operating officer, told reporters in December that the Redmond factory was producing as many as seven satellites per day.

“Because Starlink satellites fly in a global constellation, we can bring high-speed Internet to places that previously had terrible service or no service at all,” said Lauren Lyons, a SpaceX engineer who provided commentary on SpaceX’s webcast of Wednesday’s mission. “Some of the most exciting opportunities for Starlink are rural or remote locations where traditional fiber or cable just isn’t practical.”

SpaceX has not announced a price for the Starlink service, or downlink and uplink speeds customers can expect through the network.

“Building a constellation that can provide this level of service is incredibly challenging, but we are making steady progress toward that goal with every Starlink launch,” Lyons said.

Scientists have raised concerns that thousands of Starlink satellites in low Earth orbit could interfere with astronomical observations. The Starlink spacecraft launched last year were more visible from the ground than predicted, prompting criticism from some scientists and amateur astronomers.

The satellites are especially bright soon after launch, when they are bunched together and flying at lower altitudes.

SpaceX debuted an experimental darkening treatment on one of the Starlink satellites launched Jan. 6, but none of the 60 satellites delivered to orbit Wednesday have the darker coating, which is aimed at minimizing reflectivity of sunlight down to the ground.

“It takes a few weeks for those satellites to reach their final orbit destination, so we don’t have the results of that DarkSat experiment just yet, but we’ll be sure to share what we’ve learned as the data becomes available,” Lyons said.

With Wednesday’s launch, SpaceX has sent 120 Starlink satellites into orbit on two Falcon 9 missions just this month. At least one Starlink launch with approximately 60 additional satellites is scheduled in February on another Falcon 9 rocket.

More than half of SpaceX’s 35 to 38  launches scheduled in 2020 will carry Starlink satellites, Shotwell said last month.

Scientists learn how plants manipulate their soil environment to assure a cheap, steady supply of nutrients