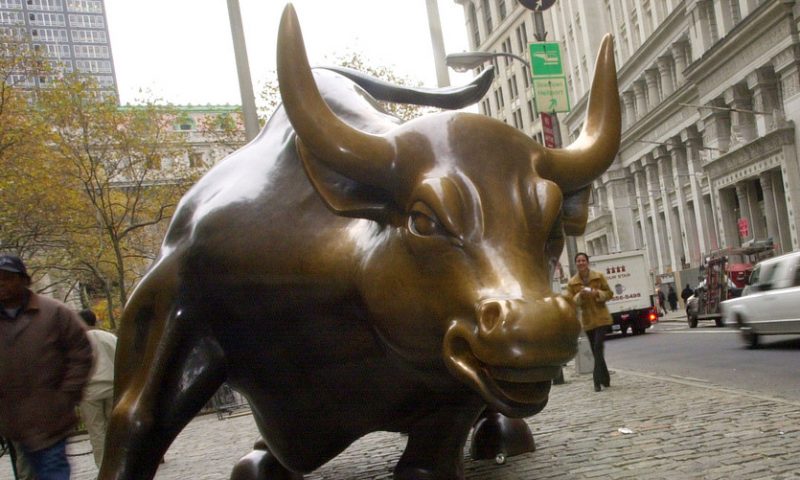 The benchmark S&P 500 index rose for seven of the last eight days and has now risen for four consecutive weeks.

The Dow, the S&P 500 and Nasdaq Composite index all ended at record closing highs.

In other U.S. economic data, Americans increased spending in November at the fastest rate in four months, suggesting households still have plenty of buying power to keep the economy growing at a steady pace through the holiday shopping season.

“Overall, the bottom line is that the economic numbers keep coming in strong,” Joe Saluzzi, partner, co-head of Equity Trading at Themis Trading told MarketWatch. “I think a lot of people might not have been positioned for this.”

“If the economy is not rolling over and going into a recession ditch, and tame core consumer inflation is low at 1.6 percent, you can bet your bottom dollar, the Federal Reserve is going to keep enough punch in the punch bowl to make sure that 2020 is going to be a super year for stocks,” MUFG chief economist Chris Rukey wrote in a note. “The S&P 500 is paying more in dividends than the Federal Reserve is paying on cash.”

Wall Street sentiment also remains supported by progress on international trade policy, after the U.S. House passed the USMCA bill to replace NAFTA on Thursday and the U.S. and China agreed on a partial deal last Friday.

“This is a boost to Mr. Trump, who considers it to be his signature trade deal, and reduces one source of uncertainty for firms, but it is dominated by the ongoing uncertainty over US-China trade talks,” wrote analysts at UniCredit, in a Friday research note.

On Friday, President Donald Trump said he had a “very good talk” with Chinese leader Xi Jinping and that a formal signing of a partial U.S.-China trade deal is being arranged. However, the report of the call by China’s Xinhua news agency said China’s President Xi Jinping was concerned about U.S. interference in China’s internal affairs and noted “the negative words and deeds” of the United States on issues related to Taiwan, Hong Kong, Xinjiang and Tibet.

Meanwhile, investors saw little political risk in Wednesday’s impeachment of President Trump by the Democratic Party controlled House, amid expectations that the Republican-controlled Senate will vote against removing Trump.

Separately, it also was a relatively mild “quadruple witching” day, when the four-pronged expiration of stock options and stock-index futures and options tends can contribute to increased volume and volatility in the latter portion of a trading day. This time it fell during a year-end holiday period where banks aim to shore up their capital to comply with regulatory requirements, which can deflate volumes over the last several days of the year.

U.S. Steel Corp. X, -10.78%  fell 10.8% after announcing Thursday afternoon that its financial performance will be worse than expected in the fourth quarter, and the company plans to slash its dividend, suspend stock repurchases, lay off workers and suspend some operations.

Nike Inc. NKE, -1.18%  late Thursday reported big jumps in its quarterly profit and sales, but the stock lost 0.2% Friday after hitting a record close of $101.15 on Thursday.

Boeing BA, -1.65%  shed 1.7% after its new Starliner capsule ran into trouble and went off course in orbit minutes after blasting off Friday on its first test flight, a crucial dress rehearsal for next year’s inaugural launch with astronauts.

The yield on the 10-year U.S. Treasury note TMUBMUSD10Y, -0.28%  ended less than a basis point higher at 1.916% Friday, but closing out the week with an 9.6 basis point gain, its biggest yield gain since Nov., according to Dow Jones Market Data.

Bold stock-market calls for 2020: Begin with GE and Google