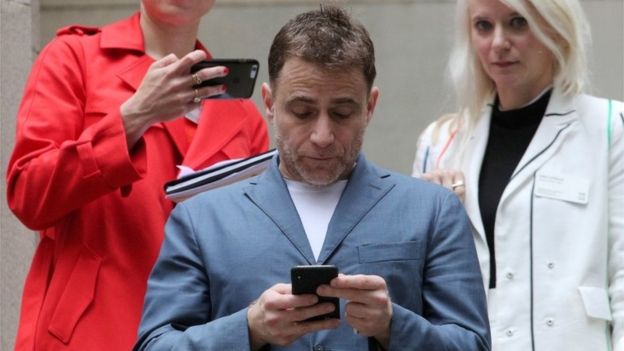 Another tech start-up made a blockbuster debut on the US stock market last week, with shares in Slack ending the week more than 40% higher.

That values the Silicon Valley-based business at $20bn, not bad for a messaging app that was only publicly released in 2014 and has never turned a profit.

So why were investors so keen?

Basically, workplace communication based around email is ripe for a shake-up – and many believe Slack will lead the way.

Indeed, headline writers would have you believe that Slack is the “Email Killer”. But even boss Stewart Butterfield doesn’t go that far.

He does, though, think his Searchable Log of All Communication and Knowledge (Slack) software can revolutionise the way employees communicate.

How does it work?

The software funnels office communication around teams, projects or subjects of common interest. They are called channels.

It aims to be a more focused way of messaging, allowing people to converse in groups and replace email chains that often scatter-gun information to inboxes that never stop filling up.

Channels are labelled with a hashtag: if you’re working on a new marketing pitch, the channel could be called #pitch. For office workers with a common love of Game of Thrones, it could be labelled #thrones.

Overlaying this is a suite of other applications and functions, such as automatic notifications when other users send you a message, or the ability to have relevant tweets posted directly to the chat channel. And it works across all platforms, including Android, iOS and Windows.

Mr Butterfield, the entrepreneur behind the Flickr photo app that he sold to Yahoo, is sympathetic if people struggle to get their heads around this new way of communication.

One of his biggest challenges, he said recently, was explaining how it works to non-users.

Still, the company has 100,000 paying customers, plus many more using a free basic service, with the number of active daily users put at 10 million.

Another master to serve

It might sound crazy to have to pay to use an instant messenger, but Slack offers a lot of functions for corporate customers:

Ryan Ozawa, who uses Slack at the Hawaii Information Service, said: “The great thing about channels is I know which ones are going to be important and need checking frequently. Email is not like that.

“It has improved productivity. It has cut down on the number of meetings and the people who need to be at those meetings,” he said. Staff in different parts of the organisation can work across projects in real-time.

It won’t kill email, he says: “But Slack does fit between email and meetings.”

The danger is that it becomes just another tool to keep across. “I already have to check Twitter, Facebook and so on. I don’t need another master to serve,” Mr Ozawa said.

Kim Hillyer, part of the team rolling out Slack across international investment and trading firm TD Ameritrade, estimates that the number of internal emails has fallen 30% since they began using it six months ago.

Preparing the firm’s quarterly profits statement would normally take about three weeks and require 10 meetings each lasting 90 minutes or so. With the introduction of Slack, went down to a few days and just three meetings, according to Ms Hillyer. “Slack is a sort of virtual office,” she said.

Returning from a recent two-week holiday, she was relieved not to have to filter through hundreds of emails to identify important messages: “It took me 20 minutes to get up to speed on what was urgent. That was a bit of a light bulb moment of the benefits.”

She acknowledges push-back from some staff. Not all people like working with, perhaps, 50 channels, on top of all the other platforms and social media. For many, it’s just another distraction.

And the system also has to be policed so that people are discouraged from sending irrelevant information in the channels. But it’s a learning curve, and staff are still discovering the potential, Ms Hillyer says.