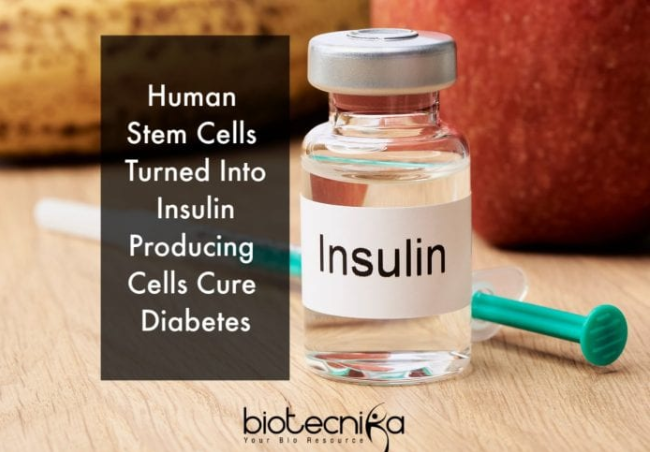 Scientists at the Washington University School of Medicine in St. Louis published a new study in the journal Nature Biotechnology on Feb. 24, which shows that human stem cells can be used to rapidly cure diabetes in mice.

They turned human stem cells into insulin-producing cells and showed that the blood sugar levels in mice infused with such cells can be controlled and diabetes be cured for nine months.

In the study, they used severely diabetic mice with a blood sugar level of more than 500 milligrams per deciliter of blood. Such high levels of sugar can be fatal for a person. The introduction of insulin-secreting cells to mice decreased the sugar level to normal and maintained the same level for nine months.

The study was led by Jeffrey R. Millman, PhD, an assistant professor of medicine and of biomedical engineering at Washington University.

The same researchers had converted human stem cells into pancreatic beta cells several years ago. These cells secreted insulin when encountered with blood sugar. But the work had its limitations and failed to effectively control diabetes in mice.

Now they have come up with a new technique that is much more efficient in controlling blood glucose levels.

When scientists try to convert human stem cells into other cell types like a heart cell, neuron or insulin-producing beta cell, they end up producing many unwanted cell types. Similarly, in the case of beta cells, they produced other cells like liver cells or pancreatic cells. They are not harmful, neither they fight diabetes.

You get less therapeutically relevant cells the more off-target cells you get. To cure diabetes in a person, a billion of beta cells are required. But if a quarter of cells are irrelevant cells, you will need 1.25 billion cells. This makes the treatment 25% more difficult.

“It’s a completely different approach, fundamentally different in the way we go about it,” he said. “Previously, we would identify various proteins and factors and sprinkle them on the cells to see what would happen. As we have better understood the signals, we’ve been able to make that process less random,” said Millman

This understanding enabled Millman to produce more beta cells. Moreover, the new technique can be used to convert stem cells from multiple sources which increase the ability of the study in curing Diabetes.

Before the strategy can be used to cure Diabetes in humans, much more study is required. It has to be tested in larger animal models for longer time and worked to automate the process of producing beta cells that can bring hope to millions of people on insulin injections.